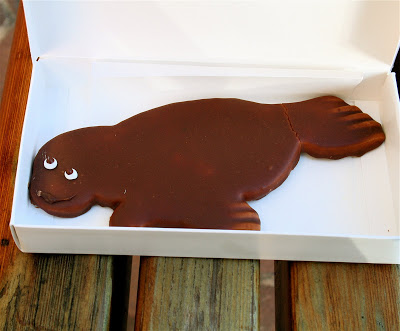 One time it took my dad 7 hours to drive from New Haven, CT to Philadelphia, PA. Was there traffic, you may wonder? No. How then could it have taken so long? Well, he arrived to Philadelphia proper in about 4 hours, but then spent the next three hours driving around the suburbs, an area he had visited several times, trying to “follow his nose” to his hotel. He was exasperated (who wouldn’t be?) to say the least, when he finally called me from his hotel room explaining what had happened. Our dinner reservation, planned for 3 hours earlier naturally, had long been cancelled, and we decided to meet for breakfast instead.

Yesterday, I felt a little bit like my dad. After spending an hour or so exploring downtown San Diego, I felt a little hungry. I called my friend — the same friend who swears it never rains in SD — who recommended a few lunch spots, one being the Living Room located in La Jolla. I had been to La Jolla once before, and so, like my dad, did not need directions. I headed back on I-5N, got off the exit for the La Jolla Parkway and headed west. The area looked familiar, but one wrong turn led me heading North, so far North I ended getting back on the 5 heading south, so far south I had to get off and turn around to head north. I wanted to scream. I contemplated pulling into the In-N-Out — a place I’m still dying to try — located right off the exit, but decided, like my dad, I could persevere for at least a few more hours.

Fortunately, before too long (well under three hours), I found myself sitting at one of the outside bistro tables at the Living Room, basking in the sun and sipping a very calming mocha, a drink highly recommended by my friend. My BLT arrived shortly after and I tucked in. Still flustered and famished from my journey up and down the 5, however, I forgot to photograph my delectable sandwich, and before I realized what was happening, I had devoured all but one bite of my potential blog entry. Alas!

After lunch, I took a quick stroll around Seal Beach, which I had seen once before but only at night. Seals are so cute! And very tired it seems. A few of them slithered (do seals slither? whatever they do, it looks exhausting) in and out of the water, but most of them lay motionless in the sand. Except for this guy pictured below. Every time the tide reached his underbelly, he arched his back, curling up his tail and head. I could have watched it all day.

In honor of my moment with the seals, I purchased a cookie, pictured above, from Girard Gourmet, another spot recommended by my friend. By this point, I had regained my composure and was able to snap a picture before tasting this yummy and very cute treat. Thanks Chu for a wonderful day in La Jolla! 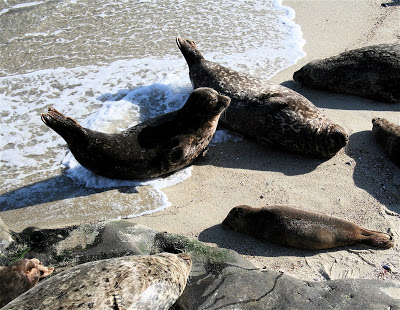