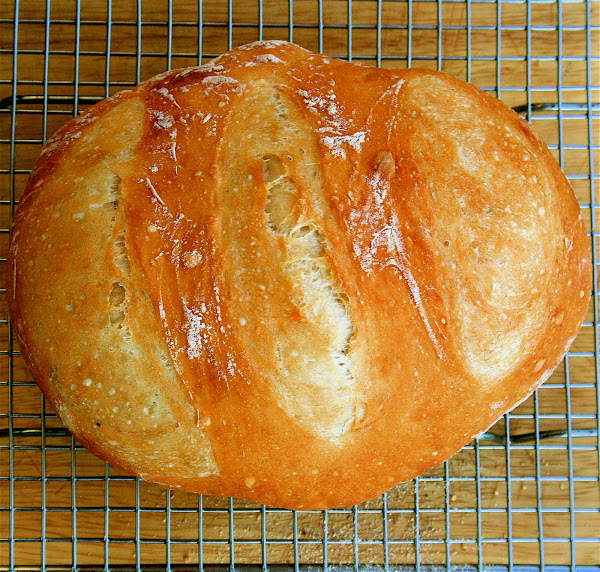 Last week, NPR aired a brief program about rising food prices and how people are changing their behavior as a result. Listeners called in sharing their money-saving secrets: Some people had begun fishing and hunting, others had begun walking or riding their bikes to market, and others had begun learning to make dishes from scratch. One man resolved to learn how to bake bread.

I thought this last idea sounded a little odd. With bread often being one of the least expensive items at the market, surely, I thought, their are better ways to save money.

I decided to investigate. Over the weekend, I made a visit to Henry’s Market (to purchase goat’s milk for a rosemary-gelato round two attempt) where I recorded some prices. A one-pound loaf of La Brea bread (the gourmet bread created by Nancy Silverton sold at grocery stores nationwide) costs on average $5.35. (To give you a range, the least expensive La Brea Country White Sourdough loaf cost $3.99 a pound and the most expensive Olive loaf cost $6.99 for 14.5 ounces.) Now, La Brea bread is one of the more expensive varieties of bakery-style bread found at grocery stores, but it’s also one of the best, and I’ve chosen to use it as the measure in this experiment for that reason.

Now, on to Artisan Bread in Five Minutes a Day. I’ve been meaning to open this book since receiving it at Christmas from my father-in-law, who had read about it in this November 2007 NYTimes article: “Soon The Bread Will Be Making Itself”. Seriously, after I made the initial batch of starter, the bread took no more than five minutes of active time to prepare. (Plan on a 40 minute rise plus a 30 minute bake). And the result? Five stars. Ben and I ate almost an entire one-pound loaf in one sitting.

Preparing the loaves is so simple that I made bread on both Saturday and Sunday nights of this weekend, and I still have enough starter to prepare two more loaves this week. The starter keeps for at least two weeks in the refrigerator. This method, created by Jeff Hertzberg, a physician from Minneapolis, entails no kneading and can be prepared by the most novice of bread makers. If you have any inkling to learn to make bread or if you are a pro and desire a simpler method, buy this book: Artisan Bread in Five Minutes a Day: The Discovery That Revolutionizes Home Baking.

So, what does one of these loaves cost to prepare? Using the price of flour given by the American Farm Bureau — a 5-lb. bag of flour costs on average $2.39 — and prices for yeast and salt listed at Henry’s Market — a 3-lb. pound box of kosher salt costs $3.49 and a three-pack of yeast costs $2.39 — a one-pound loaf of homemade artisan bread costs about 60 cents to prepare from scratch. (Flour costs about 3 cents per ounce; yeast, 35 cents per teaspoon; and salt, 1 cent per teaspoon.) Using Henry’s Market prices, too, this estimate of 60 cents is likely on the high side.

The average price of a loaf of La Brea bread is almost nine times more expensive. Even the cheapest loaf of bakery-style bread, priced at $1.29 a pound, costs over twice as much as a loaf of homemade bread. Upon closer analysis it seems the man who called into the radio program actually might be on to something.

Even if saving money is not your goal, however, give this recipe a stab purely to experience how truly simple bread making at home can be. I’m dying to try other recipes in this book such as roasted red pepper fougasse, Italian semolina, and sun-dried tomato parmesan but for now, I’m extremely happy with the results of this master boule: It’s perfectly salty, moist and airy and delectable all around.

We ate three-quarters of this loaf in one sitting. It’s so yummy! 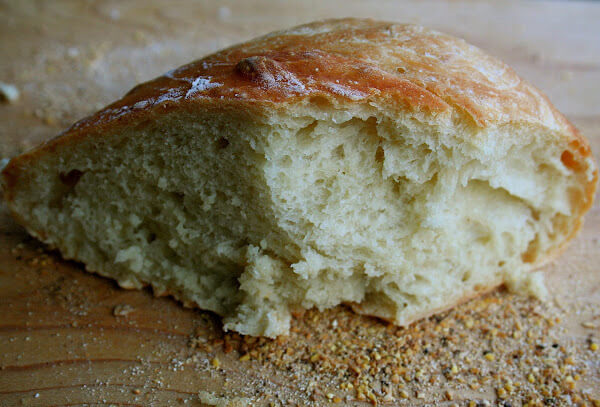 1. Warm the water slightly: It should feel just a little warmer than body temperature, about 100ºF.

2. Add yeast and salt to the water in a five-quart bowl, or preferably, in a resealable, lidded (not airtight) plastic food container or food-grade bucket. Don’t worry about getting it all to dissolve. (I added the yeast, then the flour and then the salt on top of the flour to avoid killing any of the yeast, but apparently this is unnecessary.)

3. Mix in the flour: Add all of the flour at once, measuring it with dry-ingredient measuring cups, by gently scooping the flour, then sweeping the top level with a knife or spatula; don’t press down into the flour as you scoop or you’ll throw off the measurement by compressing. Mix with a wooden spoon. If necessary, reach into your mixing vessel with very wet hands and press the mixture together. Don’t knead! It isn’t necessary. You’re finished when everything is uniformly moist, without dry patches. Dough should be wet and loose enough to conform to the shape of the container. 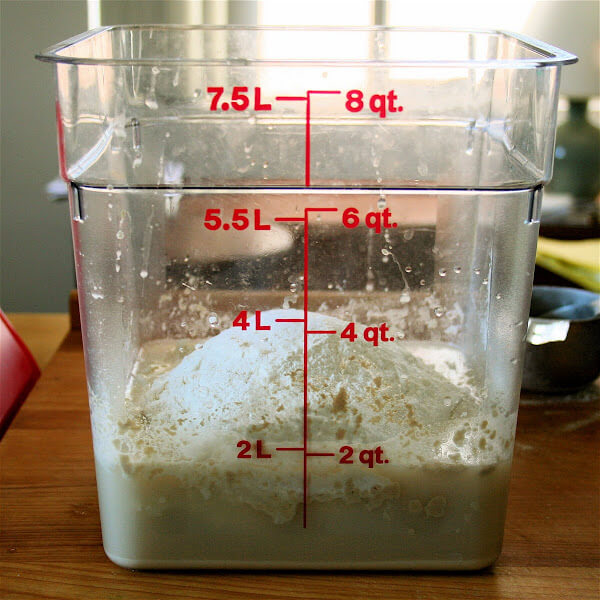 4. Allow to rise: Cover with a lid (not airtight) that fits well to the container you’re using. Allow the mixture to rise at room temperature until it begins to collapse (or at least flattens on the top), approximately two hours. You can use a portion of the dough any time after this period, but fully refrigerated dough is less sticky and is easier to work with. So, the first time you try this method, it’s best to refrigerate the dough overnight before shaping a loaf. 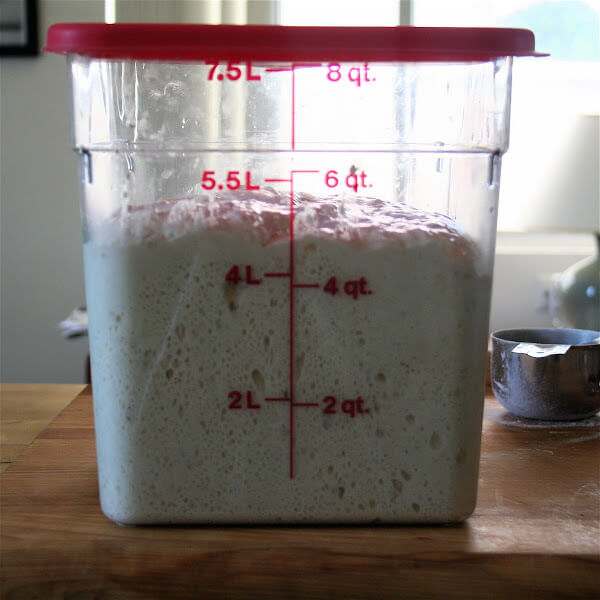 5. Sprinkle the surface of your refrigerated dough with flour. Pull up and cut off a 1-pound (grapefruit-size), using a serrated knife. Hold the mass of dough in your hands and add a little more flour as needed so it won’t stick to your hands. Gently stretch the surface of the dough around to the bottom on all four sides, rotating the ball a quarter-turn as you go. The correctly shaped final product will be smooth and cohesive. The entire process should take no more than 30 to 60 seconds. 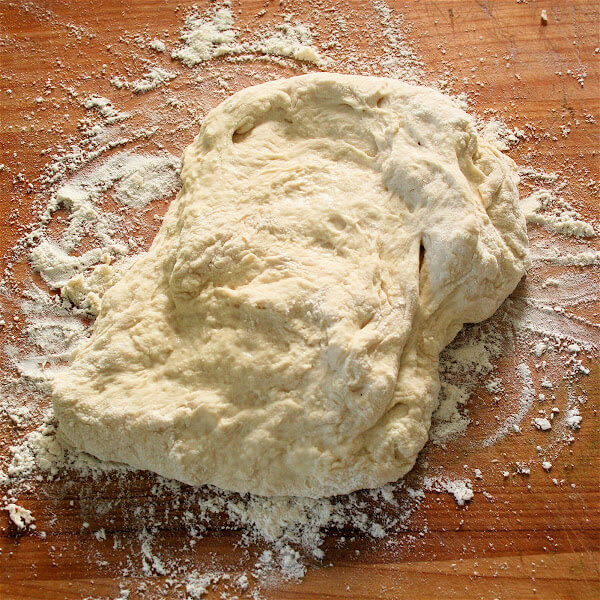 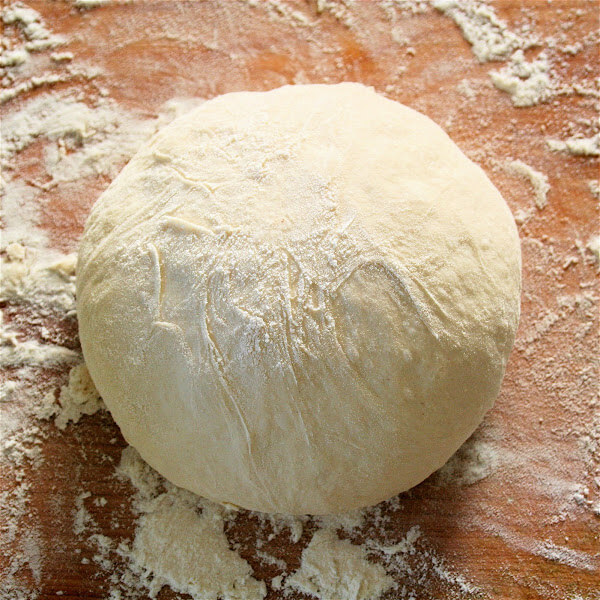 7. Twenty minutes before baking, preheat the oven to 450ºF, with a baking stone placed on the lowest rack. (If you don’t have a stone, don’t worry.) Place an empty broiler tray for holding water on any other shelf that won’t interfere with the rising bread. (This helps to make the crust crispy, but your bread will still be delicious if you omit this step.)

8. Dust the top of the loaf liberally with flour, which will allow the slashing knife to pass without sticking. Make several ¼-inch-deep slashes across the bread. (Again, if you omit this step, your bread will taste the same.)

9. With a quick forward jerking motion of the wrist, slide the loaf off the pizza peel and onto the preheated stone. (Alternatively, butter a Pyrex dish or baking pan and place the bread in the pan.) Quickly but carefully pour about one cup of hot tap water into the broiler tray and close the oven door to trap the steam. Bake for about 30 minutes, or until the crust is nicely browned and firm to the touch. Allow to cool completely, preferably on a wire rack.

If you bake frequently, purchase yeast in bulk bags and store in your refrigerator or freezer in an airtight container. You’ll save a ton of money: 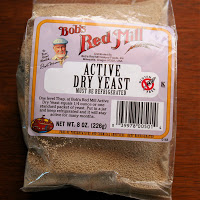 Here are two shots of an unslashed loaf baked in a buttered one-quart Pyrex dish. The difference in crust texture, in my opinion, is indetectable. If you don’t have a pizza stone and don’t feel like going through the trouble of a steam tray, this method, outlined in the recipe, works just fine. 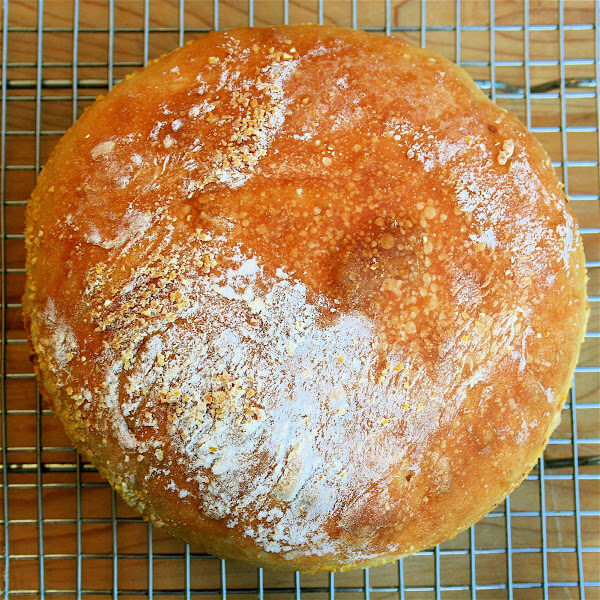 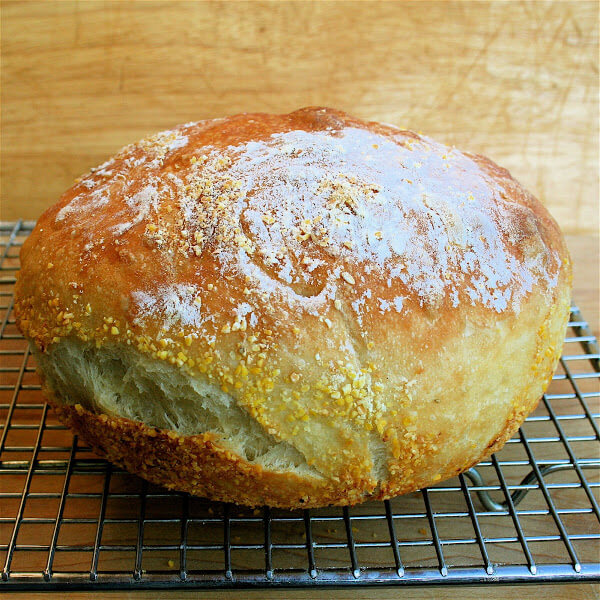 139 Comments on “Artisan Bread In Five Minutes A Day, Seriously”