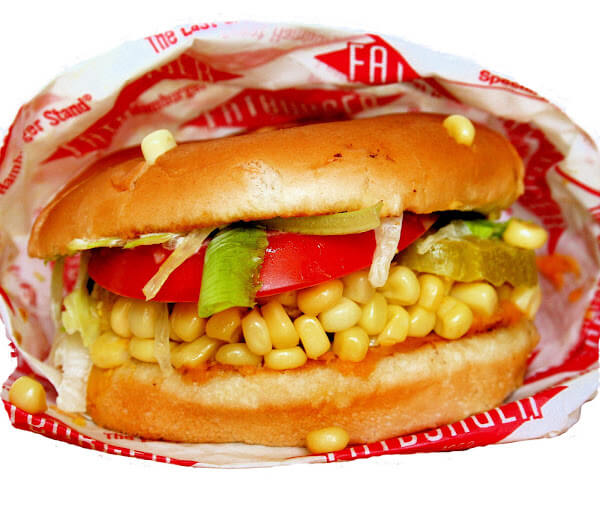 I left Slow Food Nation feeling inspired yet overwhelmed by the many issues facing this country (and the world) regarding food production.

Perhaps what I thought was most interesting, however, was hearing the many speakers collectively criticize both Obama and McCain for failing to discuss reformation of our food system. The panelists noted that if politicians could pass laws that promote sustainable agriculture, they would solve (or begin to solve) many other problems along the way.

But the “slow food” or “local food” movement has always been driven by the people. Wendell Berry described the ongoing revolutions as a “leaderless movement.” Below I have summarized what I learned from the various Food For Thought sessions I attended.

When asked how our presidential candidates stand on the subject of food and agriculture, author Michael Pollan responded frankly: “They don’t stand.”

Among the many challenges the next president of the United States faces, three remain at the forefront: limiting our country’s dependence on foreign oil, reducing the high costs of health care, and fighting global warming. Senators Barack Obama and John McCain have proposed various solutions to these problems ranging from off-shore drilling to universal health coverage to cap-and-trade policies. Absent from any discussion thus far, however, has been a plan to reform our food system.

But food, noted Pollan at the Slow Food Nation event in San Francisco over Labor Day weekend, is the common link among all of these subjects. If we want to become energy independent, if we want to reduce health care costs, if we want to reverse climate change, we must reform our food system. Today it takes 10 calories of fossil-fuel energy to produce one calorie of food energy; today an abundance of cheap, nutrient-deficient food has caused a national obesity epidemic; today 25 to 30 percent of global warming is caused by industrial agriculture. Food production, energy, health and the environment are indisputably connected.

The many activists, including authors, chefs and farmers, speaking at Slow Food Nation criticized Obama and McCain equally for failing to recognize the far-reaching effects of our food system. Pollan acknowledged that elected officials have always had a political interest in keeping food cheap.

Ironically, cheap food — created largely by a system of subsidy payments to corn and soybean farmers, a dated policy the new farm bill continues to allow — is the chief cause of our dependence on foreign oil, elevated healthcare costs and increasing global warming, the very problems our politicians aim to solve.

If keeping food cheap is an axiom politicians continue to heed, then the push for sustainable agriculture, it seems, will continue to be, as described by Wendell Berry, “a leaderless movement.” Berry, a farmer and author, has been a principal thinker influencing the Slow Food movement in this country.

But if Slow Food International is any example, in spite of the absence of political leadership, agricultural reformation has gathered momentum. What began in 1986 as a demonstration in Rome to protest the building of a McDonalds near the steps of the Piazza di Spagna has grown into a worldwide movement with over 85,000 members in 132 countries. Slow Food Nation drew over 60,000 supporters to San Francisco over Labor Day weekend. More and more Americans are shopping at farmers’ markets, participating in CSAs (community supported agriculture) and advocating fair trade and sustainable farming practices. A revolution is taking place thanks to the many people “voting with their forks,” as Michael Pollan says.

While Wendell Berry confessed to having given up on the political system in 1990, today he has faith in a “growing cooperative spirit” and believes that “if the right thing has a loud enough voice, [politicians] will do the right thing because they have to.”

Alice Waters, who dreams of installing a victory garden on the White House front lawn, said, “We need to feed the politicians.” Waters recounted filling the lunch boxes of Obama’s campaign staff with the juiciest peaches and plums, food she claims “awakens the senses.” If political leaders could only taste this local, organically grown food, believes Waters, perhaps change will happen more quickly.

Time will tell if a political leader will find the gumption to make agricultural policy the forefront of a national discussion. But until a Slow Food chapter exists in central Iowa, the responsibility for driving an agricultural revolution will remain with the people. As author and activist Dr. Vandana Shiva said during the final panel discussion at Slow Food Nation, “Every one of us has to be the Rosa Parks of food.” 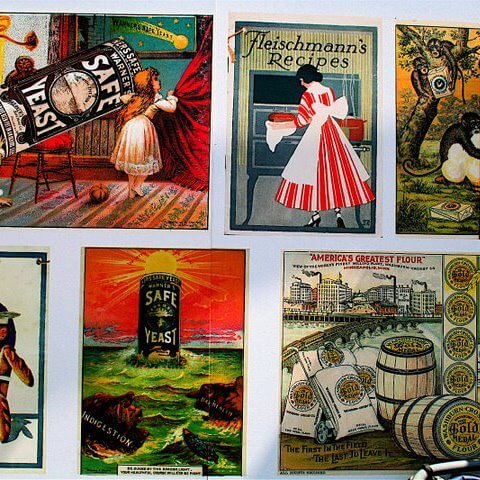 I had waited in line for one hour with six books in hand, when I saw him stand up. He’s leaving, I thought. Michael Pollan is leaving. My heart sunk. I considered jumping out of line like a crazy woman to beg him to sign one more book before he left. An act of craziness, fortunately, was unnecessary.

Michael Pollan, who, next to Wendell Berry, was receiving little action at the book-signing table, had stepped out to meet the people in line. One by one, he greeted Slow Food devotees, engaged in small talk and signed books. When he reached me, I could hardly utter a word.

“Who should I make this out to?” he asked.

“Well, Thanks Ali,” he replied.

And that was it. A 30-second conversation. My heart was racing. But I’m not going to lie — I’m pretty psyched to have my copy of The Omnivore’s Dilemma signed by Michael Pollan. (See picture below. In case you cannot read his writing, he wrote: “For Ali, Vote With Your Fork.”)

Now, about the above-pictured corn burger. I recently finished an intro graphic design course at UCLA Extension. One of our projects was to create a teaser movie poster. Teasers are the posters released months before a film hits the studios — the ones that include little written information about the film (no credits, no photos from the screening, etc.). Often even the title is absent from the poster. I chose King Corn, a documentary released in 2007 about corn production in this country. Corn, the two college friends and movie protagonists learned, is ubiquitous in our food supply, from the burgers and breads we eat to the beer and soda we drink — an idea Michael Pollan explored in depth in the Omnivore’s Dilemma. (The corn burger is something I imagine starring in a Michael Pollan nightmare.) King Corn is very interesting and can be rented at Blockbuster or purchased from the movie’s Web site. 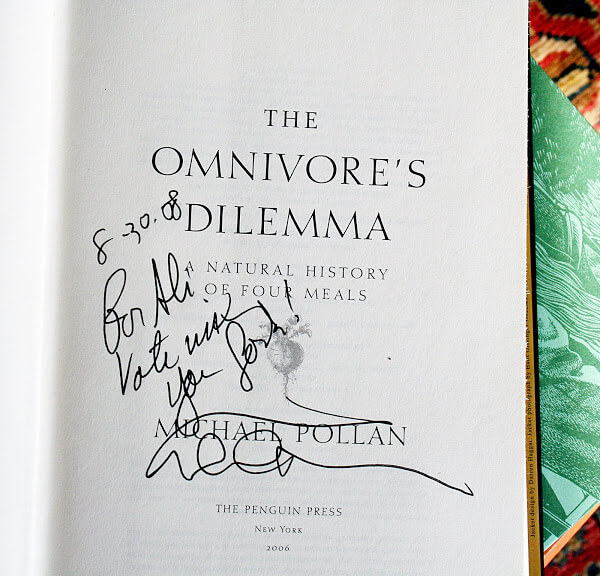 13 Comments on “Michael Pollan’s Nightmare, His Autograph & Some Thoughts From Slow Food Nation”