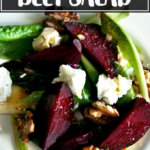 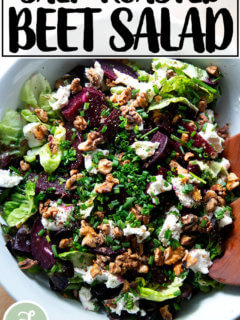 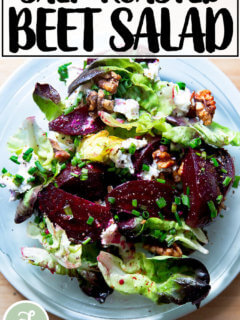 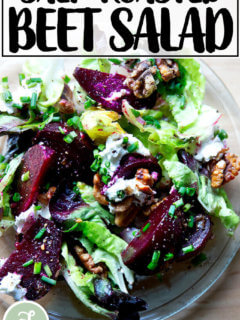 This salad features a very classic lineup of ingredients: beets, goat cheese, and walnuts. A shallot vinaigrette, seasoned with fresh orange juice, always a nice match for beets, brings it all together. Below you’ll find two simple methods for cooking beets: salt-roasted and steam-roasted.

Have you ever salt-roasted beets?

Don’t worry: the beets don’t taste overly salty; in fact, they don’t taste salty at all. They taste perfectly seasoned, sweet and earthy with a nice firm texture.

I was inspired to blog about this method after reading an article in the March issue of Saveur — all about where to eat in Los Angeles — which offered a recipe for Wolfgang Puck’s beet and goat cheese napoleons, an appetizer served at Spago.

A short article in the back of the issue addresses how to cook beets so that their color doesn’t run. To preserve color and nutrients, Saveur recommends placing beets (5 to 6) in a 9×13-inch baking dish, pouring in an inch of water, covering the dish tightly with foil, and roasting until a knife easily slides into the beets, about 1 1/2 hours. I used to cook beets just as prescribed.

That was until I learned the method of the chef (former chef) from the cafe where I used to work. He salt-roasted his beets with rosemary and thyme, and his beet salad, served with a goat cheese-topped crostini, Blue Heron Farm greens, and a lemon emulsion, was one of his signature dishes.

When I tried his cooking method at home, I discovered something remarkable: not an ounce of liquid (well maybe a teensy tiny bit) leeches from the beets. If preserving color and nutrients is the goal, then salt roasting is the way to cook beets.

Beets’ affinity for orange makes the dressing for this salad, adapted from Saveur’s, particularly nice: reduced orange juice, orange zest, shallots, rice vinegar, chives, and olive oil. I like to spoon this dressing over the salad rather than toss it with the ingredients — beets turn a tossed salad into one big red mess.

Think you don’t like beets? Try salt roasting them. As a final endorsement, I’d like to share that my husband never liked beets until he tasted them cooked this way. The first time I salt-roasted beets and served them to him, he asked me what was different and why he liked them. Had I not been so impressed by his discerning palette, I might have been offended — I never knew he didn’t like beets. And it turns out he didn’t. I just didn’t know how to cook them.