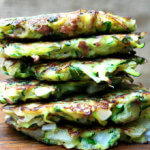 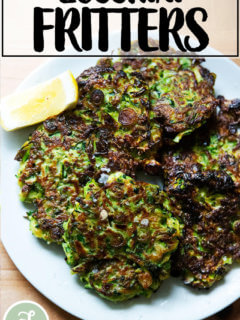 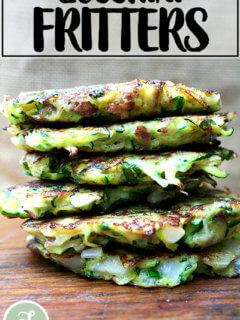 Made with 5 ingredients, these simple zucchini fritters are a snap to throw together. This is a great recipe to turn to at the height of the summer when the summer squash is arriving in droves from your farm share or growing before your eyes in your garden. With a squeeze of lemon and a pinch of salt, these fritters make a great summer appetizer.

If you find yourself overloaded with zucchini or summer squash, here’s a great recipe to turn to: fritters!

Fritters can made from anything from cabbage to corn. In short, they’re finely chopped or grated vegetables bound by flour and egg. The key to making good fritters lies in finding the balance of egg and flour: too much flour and the fritters can taste gummy; too many eggs, and the fritters will taste, well, eggy; too much of both, and you’ll make pancakes!

As with veggie burgers, I love making a test patty not only to see if the fritter will hold its shape while being cooked but also to test for seasoning. This simple step saves a lot of heartache down the road.

As with making potato latkes, the key when making summer squash fritters is to let the grated squash drain in a colander for at least 15 minutes to allow the excess moisture to drain out. Removing the moisture is key to ensure the fritters brown and crisp properly in the pan.

Made with 5 ingredients, these simple fritters are a snap to throw together. When I’m up for it, I’ll make some tzatziki to serve alongside, but they are delicious on their own too, with a squeeze of lemon and a pinch of flaky sea salt. Give them a whirl! I know you’ll love them.

How to Make Zucchini Fritters

Make the zucchini fritter “batter” by combining all of the ingredients in a large bowl.

Portion the batter into balls …

… then fry in a skillet for 2 minutes a side.

Serve with lemon, sea salt, and tzatziki if you are up for it.

This is an old recipe that I recently updated and simplified, by removing the herbs and onions and replacing them with sliced scallions, which I always have a ton of on hand in the summer thanks to my farm share. I also omitted the lemon zest, opting instead to finish the fritters with a squeeze of fresh lemon juice. Finally, the original recipe called for some grated potato as well, which is a nice addition if you have it, but not missed if you don’t.