We passed Saratoga Apple en route to Argyle, but the stand’s happening scene — live music, wood-fired pizza, alpaca petting — lured us back on our way home. We soon discovered the main attraction: apple cider donuts. Made on the premises, these warm, cinnamon-and-sugar coated, crispy on the exterior, feather-light donuts disappeared by the tray-full about as quickly as they emerged from the fryer.

Upon returning from the stand, I read online that Saratoga Apple’s donuts “have been known to inspire jealousy, ecstasy, and even inter-state travel.” I wasn’t surprised. I have never tasted anything so delicious. And of course I immediately had to tell everyone I knew — new friends, my neighbors, the mailman, everyone at the Niskayuna Coop — about my experience. I quickly learned that apple cider donuts are kind of a “thing” around here. And that you don’t need to travel 40 miles to find a good one. And that one of the most popular spots in the area is, as the crow flies, two miles away. So much to learn, so little time.

We passed Saratoga Apple on our way to Argyle Cheese Farmer, the farm that makes the most delicious yogurt, buttermilk and cheeses, but most notably a Greek yogurt lightly sweetened with maple syrup. All of the ACF Greek yogurts have a light, whipped, mousse-like texture, a consistency achieved by whipping the strained yogurt in a stand mixer. After watching them make their Greek yogurt online, I had to try it out for myself, starting with the yogurt.

I couldn’t be more happy with the yogurt-making experience as well as the end product. Watching the transformation, as with other homemade dairy endeavors — crème fraîche, ricotta, butter — is magical, and the active work, which entails monitoring a thermometer first and keeping an eye on the clock second, is minimal.

Moreover, as promised, the process is cost-effective: my first half gallon batch cost $3.22, but from here on out, each batch will cost about $2.75, the cost of a half gallon of milk. This is a welcomed bonus because since discovering ACF as well as adding toasted muesli to the daily regimen, our yogurt intake as a family has increased tenfold (or something like that).

And wait, did I mention how pure and clean and delicious the yogurt tastes? Just something to keep in mind if you’ve got that making-cultured-dairy-products-at-home bug. I’m on my third batch, and there’s no going back.

• Fall is in the air! A few favorite fall recipes here.

• Also, the next Baking Steel pizza post is up: Grated Summer Squash with Ricotta and Basil.

After you make one batch of yogurt, you can use your homemade yogurt to make the next batch. You need 2 tablespoons of yogurt for every quart of milk. 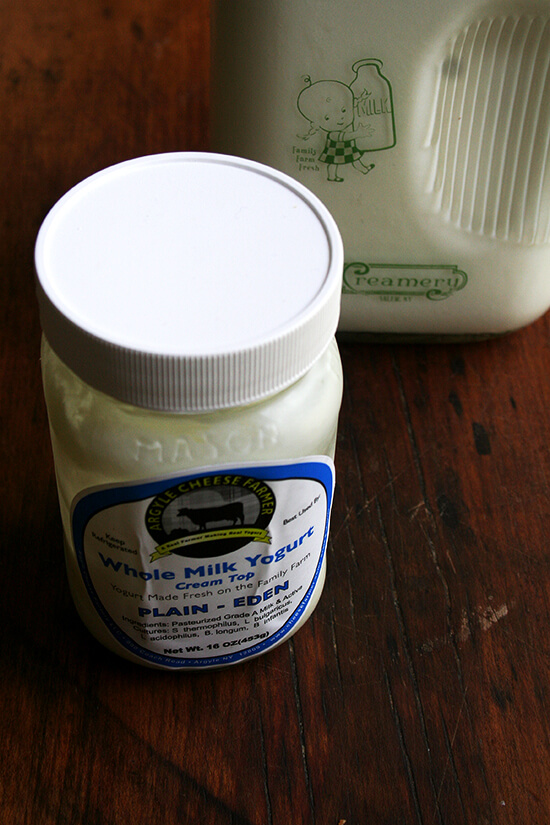 While you can use any milk you like, it’s worth splurging on some good milk for this sort of project. I buy this milk at the Niskayuna Coop, and after the one-time $1.50 bottle deposit fee, each half gallon costs $2.75, so from here on out, every 1/2 gallon batch of yogurt I make costs $2.75 plus the cost of 1/4 cup of the homemade yogurt, which comes out to be about $0.12 (For details on the math, see below). 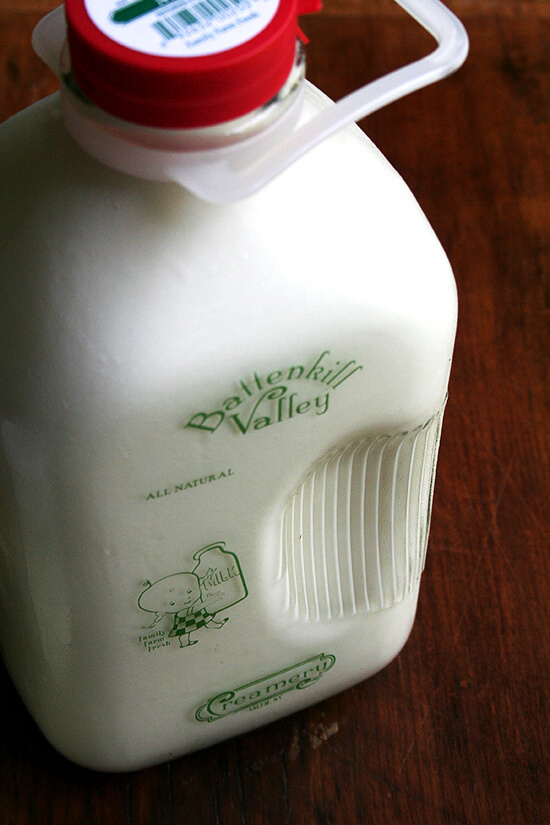 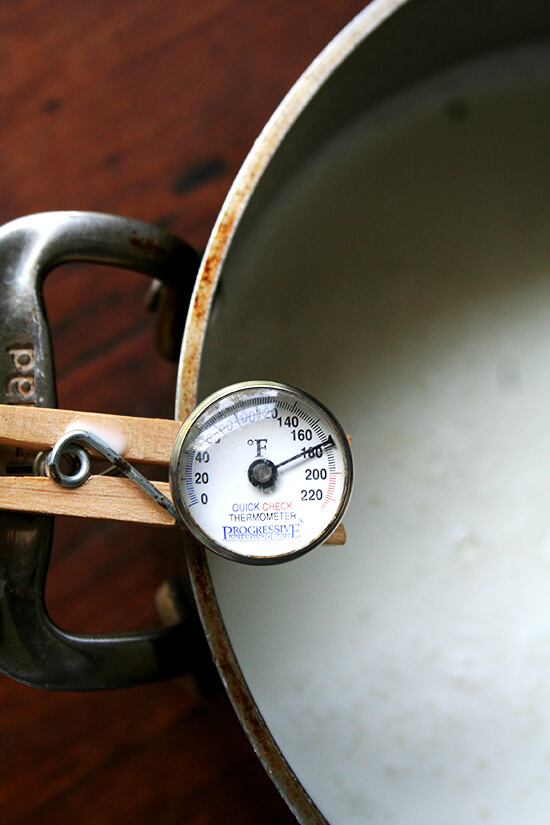 Then cooling it to 115 degrees and stirring in two tablespoons of yogurt for every quart of milk used: 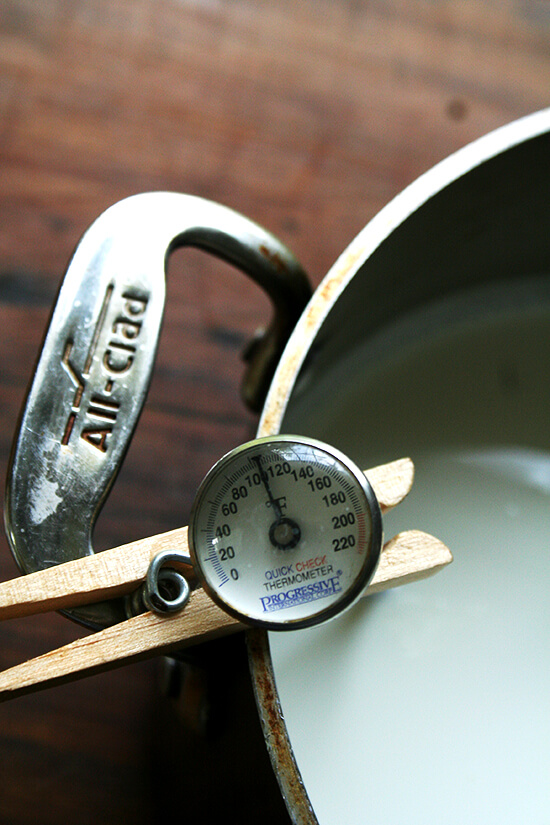 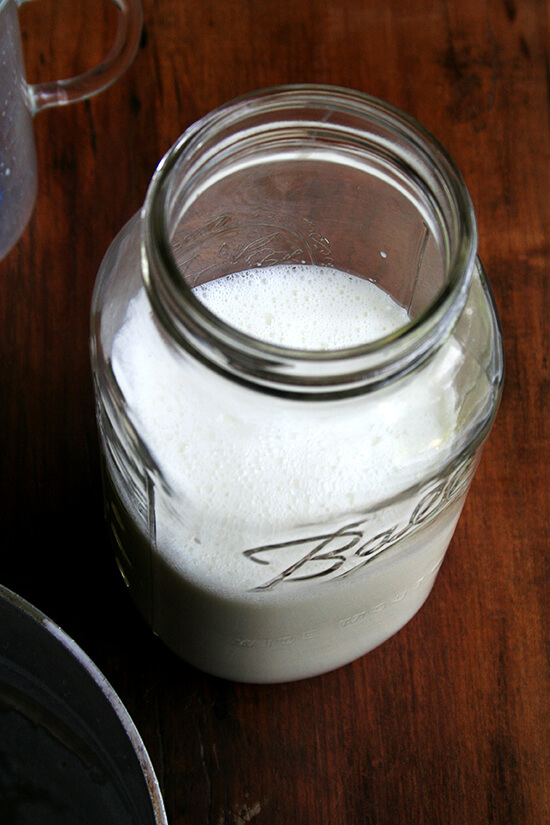 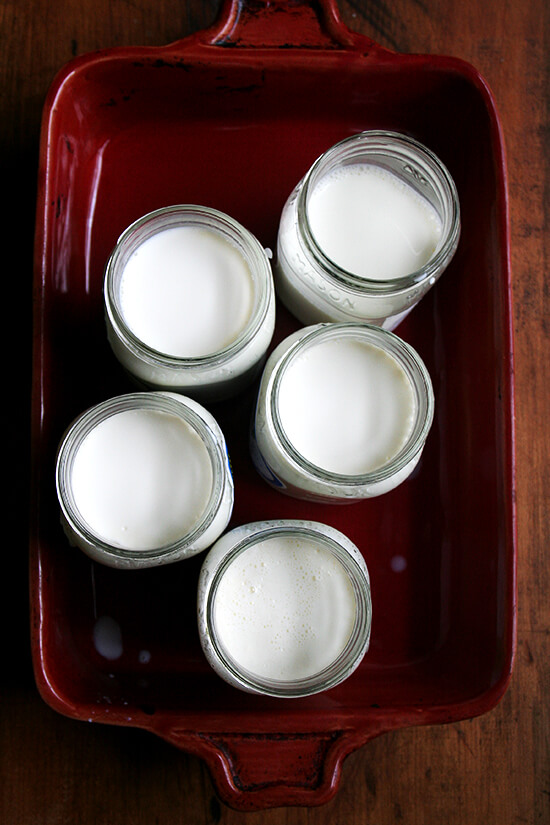 Then you swaddle the covered jars or jar in a blanket… 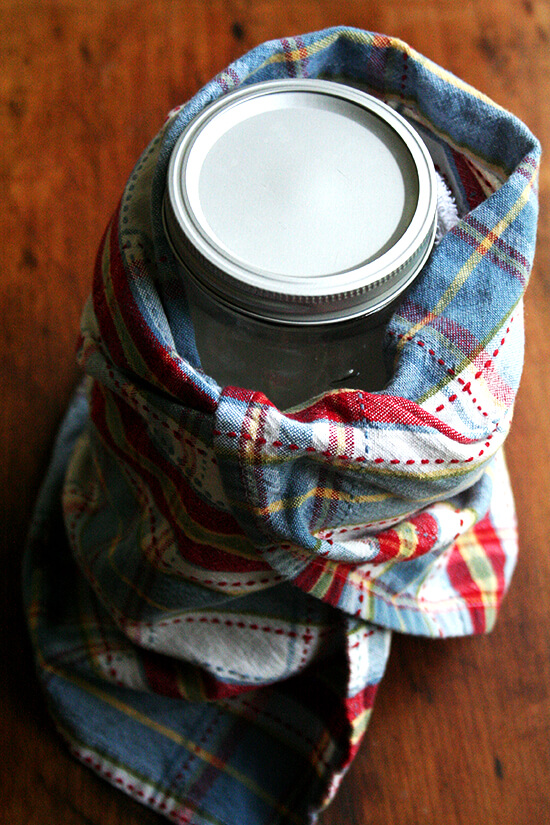 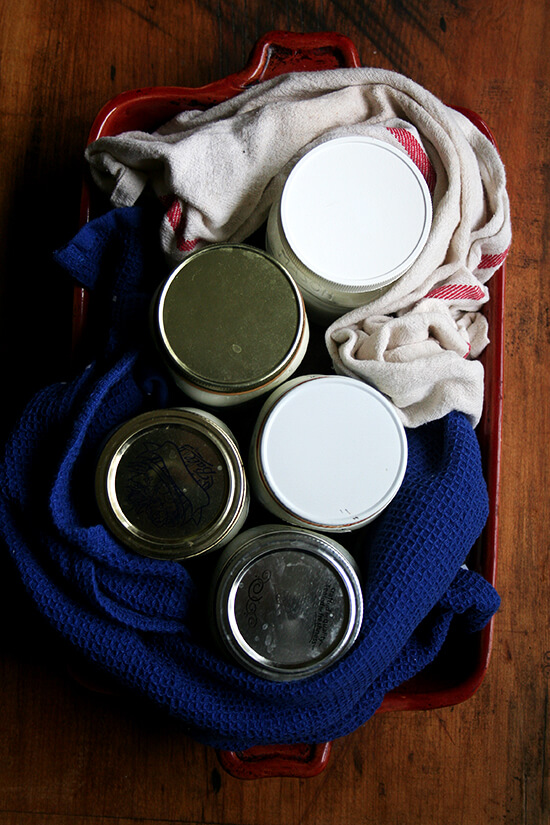 or a sunny spot on your deck or front porch. 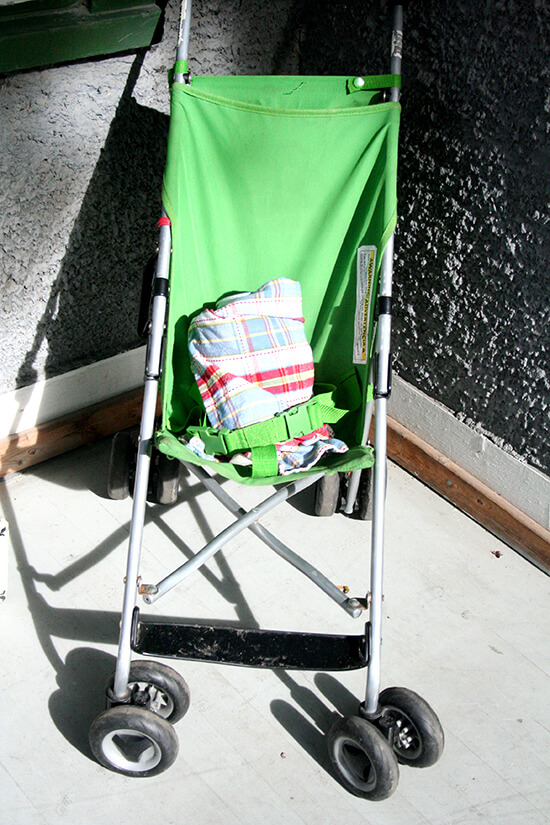 In about 4 hours, the yogurt will have set and is ready to be chilled. After it is chilled, you can portion it into smaller containers: 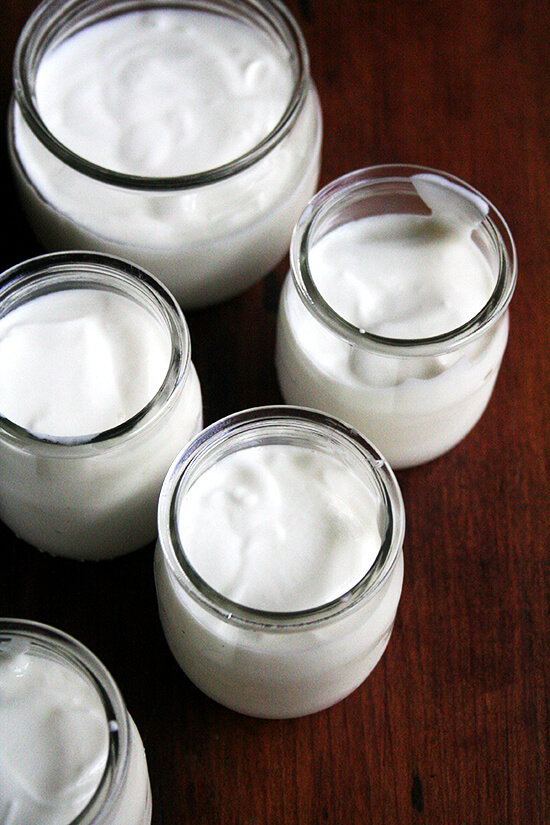 Strain yogurt in a cheesecloth or a yogurt strainer or a coffee filter set over a sieve to make thick, Greek-style yogurt. Drain for at least 18 hours. 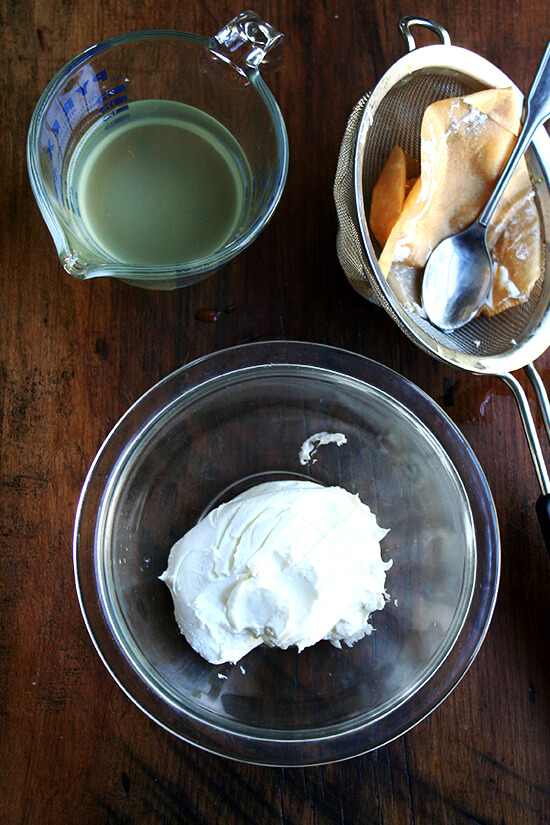 My absolute favorite Argyle Cheese Farmer yogurt is the Greek Maple. All of the ACF Greek yogurts have a light, whipped, mousse-like texture, which is achieved by whipping the strained yogurt in a stand mixer. You can watch them make it on this video. 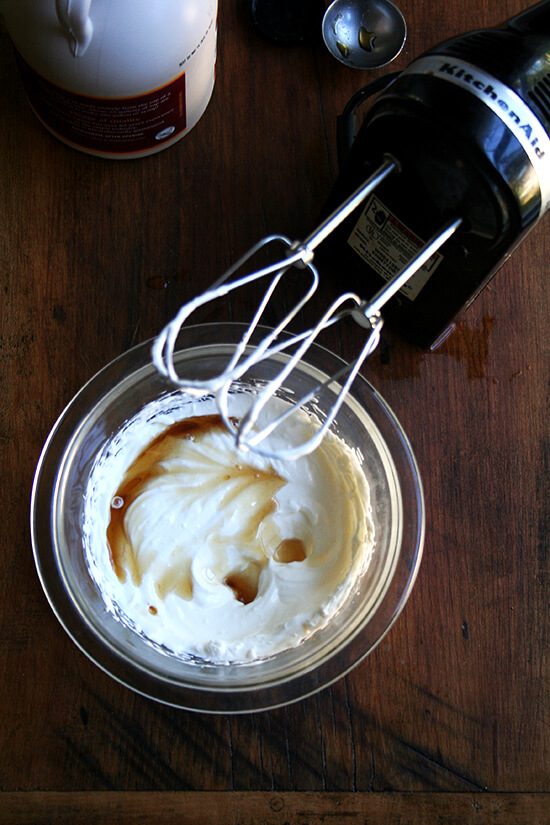 Incidentally, I made a batch of oatmeal-apple-yogurt muffins with my homemade yogurt — it’s a simple, delicious and, as far as muffins go, relatively healthy recipe. See below. 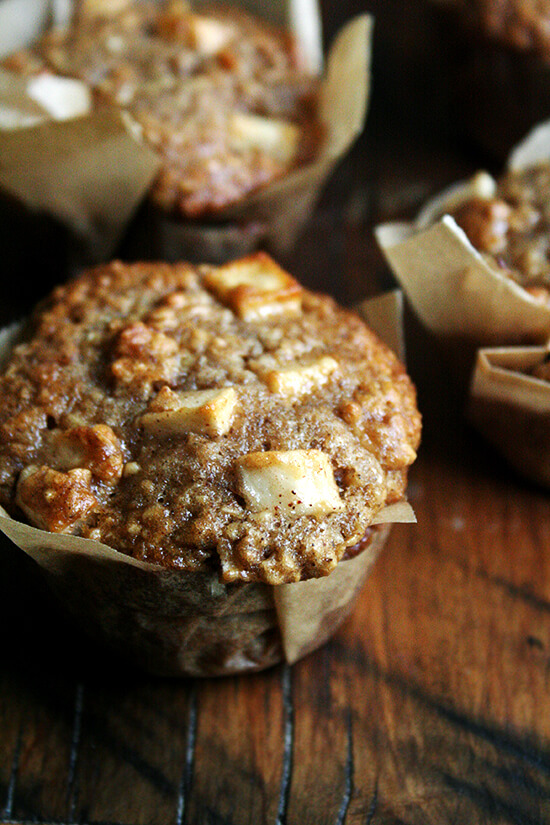 Inspired by this recipe in Bon AppetitOriginal recipe hails from Tazzaria

*I have the best results using the 1-minute Quaker Oats but rolled oats work just fine, too. And although I haven’t tried this, I bet you could quickly pulse rolled oats in a food processor to make them behave more like quick-cooking oats.

Source: Harold McGee: They do the work, You Reap the Yogurt

Notes: I am finding the homemade yogurt making process to be cost effective. Here’s the breakdown: 1 jar of plain ACF yogurt (about 2 cups) costs $3.79, which means, 1/4 cup costs about $0.47. The milk I buy costs $2.75 for a half gallon, so the first batch of homemade yogurt cost me $3.22. There are 128 tablespoons in a half gallon, so every tablespoon of homemade yogurt has a value of $0.03, so every quarter cup has a value of about $0.12. So, from here on out the cost of my 1/2 gallon batches of yogurt is about $2.87, and over time, as long as I keep using my homemade yogurt to make subsequent batches, the cost eventually will nearly equal the cost of the milk: $2.75.