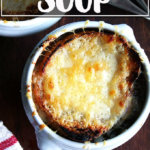 I have read over the years that good, classic French onion soup can be made with little more than water, onions, bread and cheese.

But before last week, I had never read that good French onion soup should be made with little more than water, onions, bread and cheese, and that using chicken or beef stock in such a peasant dish not only betrays the soup’s economical roots but also muddles the soup’s pure onion flavor.

In his post on making traditional French onion soup, Michael Ruhlman describes the bistros of Lyon, France, also known as bouchons, which serve country-style fare and whose owners, often a husband and wife team, wouldn’t dare make onion soup with a costly and time-consuming stock. A “fine soup with a pure caramelized onion flavor,” he insists, requires nothing more than water, onions and a splash of wine for seasoning.

Skeptical? I was, too. But yesterday, I gave it a go. After slicing six pounds of onions and caramelizing them for four hours, I poured six cups of water into the pot and seasoned the broth with a few cracks of pepper.

The broth, unadulterated by any chicken or beef flavor, tasted of pure, sweet onions. Because Ruhlman suggests adding a splash of vinegar to temper the sweetness and a little sherry and wine for more depth of flavor, I did, and the broth may have been the best I have ever made.

Making this soup will test your patience, challenge your instincts, and might leave you with blistered fingers. But I think you’ll find the process rewarding:

During the first half hour, six pounds of onions cook with a single tablespoon of butter in a covered pot. In this period, the onions release pools of juices and shrink by half in volume. Only after the juices cook off do the onions begin their long, slow caramelization ultimately shrinking to a fraction of their initial volume.

When the onions turn amber in color, you’ll have to resist all temptations to thaw the stock in your freezer and trust that water will reconstitute those super-concentrated swirls melting into the bottom of your pot into perhaps the best soup, French onion or otherwise, you ever make. I hope you all find time sometime soon to give it a try.

Since you will be chopping a lot of onions, you need a game plan: 1. Gather two large bowls — one for the onion scraps and one for the onions. A bench scraper is nice to have close by, too. Start by trimming off the ends of each onion, collecting scraps in one of the bowls as you go.

2. Next, score the outside layer of each onion… 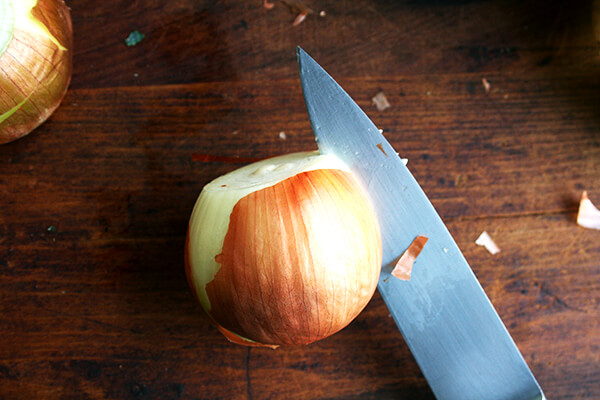 …and use your knife to peel away the skin. 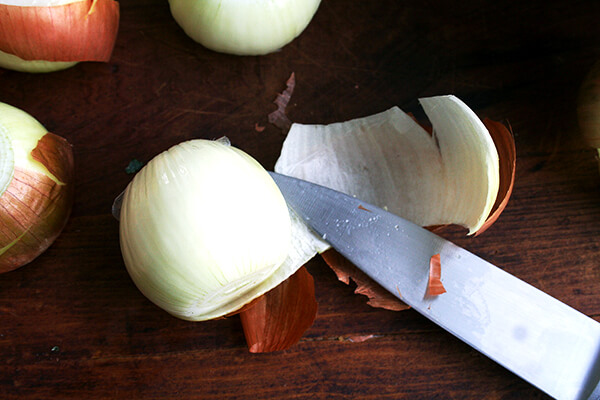 3. Cut each onion in half next. 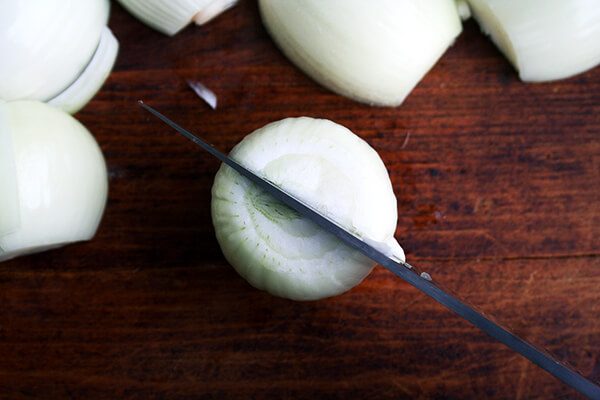 4. Slice the onion thinly making cuts perpendicular to the rings. 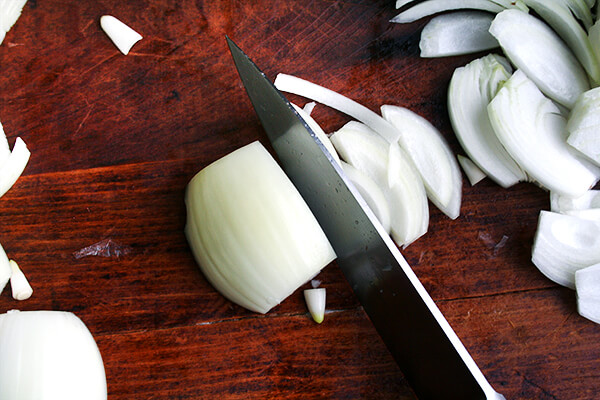 Onions after 30 minutes of cooking covered over low heat: 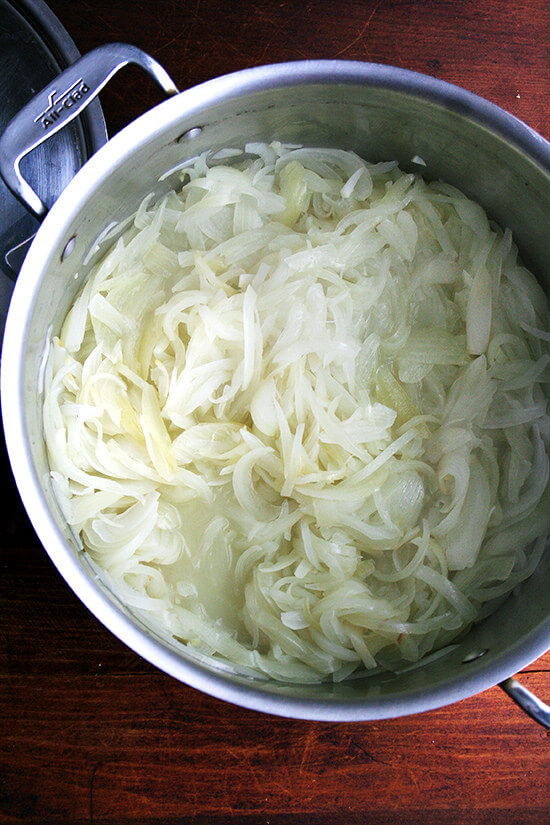 After two hours of stewing uncovered: 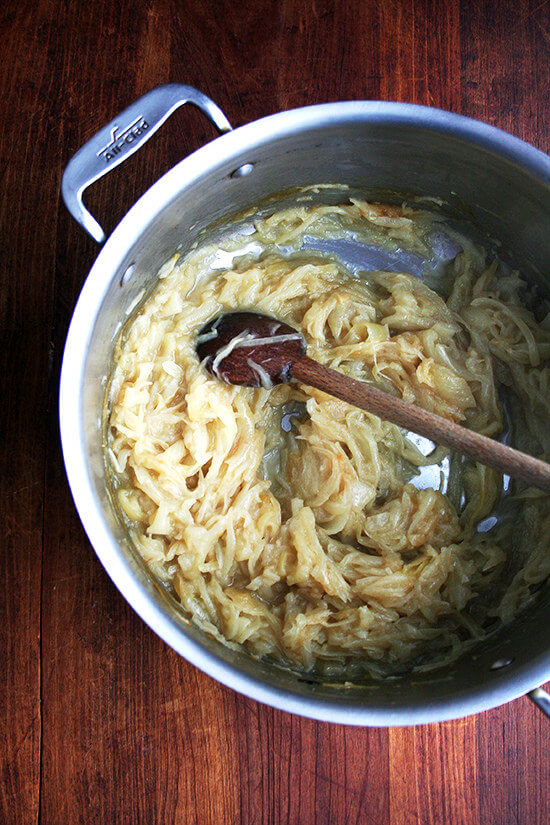 After three and a half hours total: 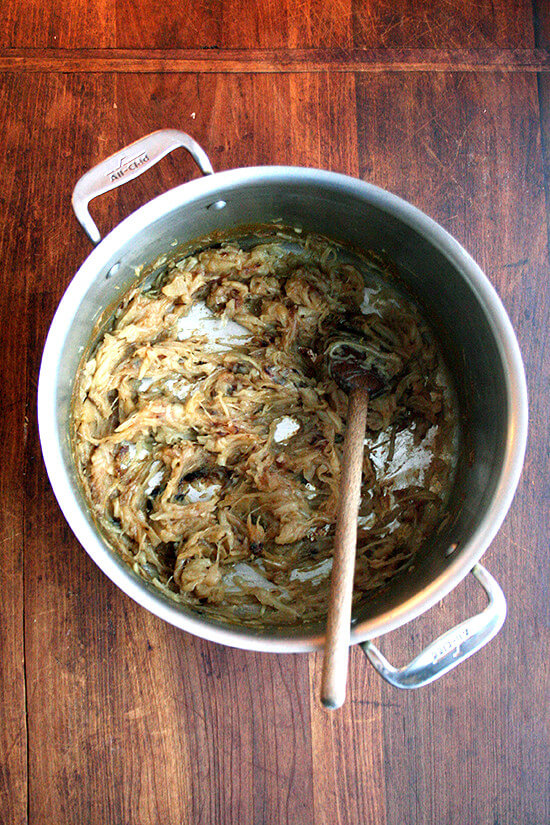 When the onions look amber in color, add 6 cups of water, 1/3 cup Sherry, a splash of red wine and a splash of vinegar: 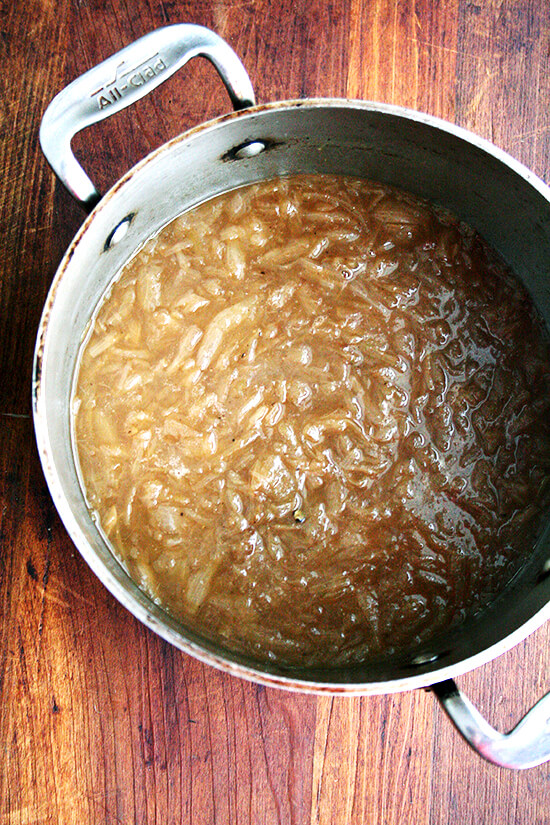 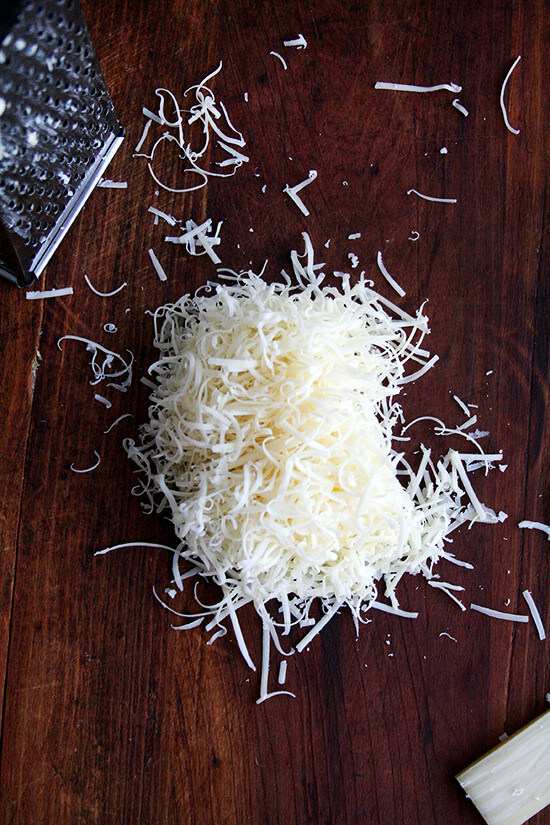 Day-old bread, sliced and ready to be toasted: 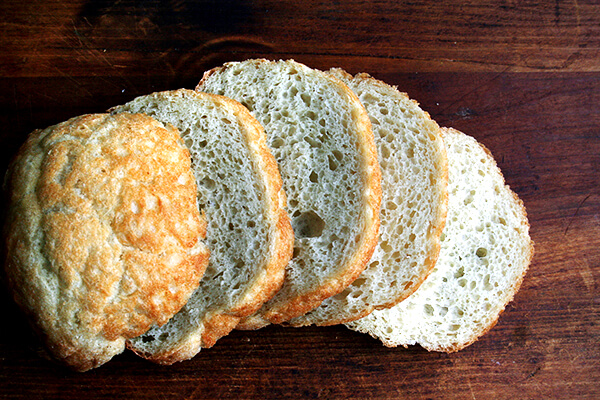 Ready for the broiler: 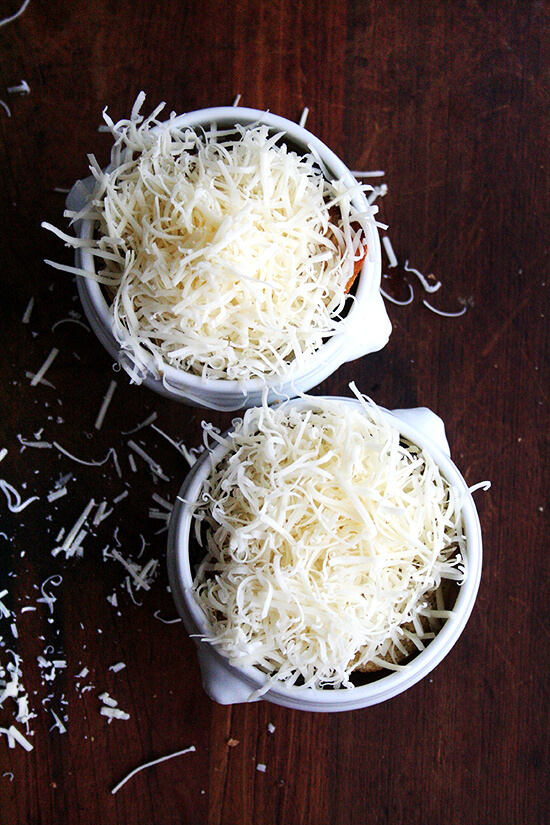 A game plan for chopping all of those onions: