My mother gave me MFK Fisher’s How to Cook a Wolf for Christmas, and I have been thumbing through it ever since, dog-earing recipes I hope to revisit soon. In the meantime I’ve been living on Fisher’s creamy potato soup. This is partly because I still have many pounds of potatoes on my counter, partly because I sense a friend, whom I encouraged to take on a winter CSA, is a little overwhelmed by said potatoes (sorry, Martha!), but mostly because the soup is simply delicious: sauté two onions, add four peeled potatoes and water, simmer till tender, add milk (thickened with a roux), and purée.

Before making this soup, I had never read any of MFK Fisher’s recipes, which, I am learning, give the reader a lot of credit. Just as Alice Waters may assume you have a pig’s foot in your refrigerator, MFK Fisher assumes you know how to make a roux. There is no hand-holding in the direction, though her notes are detailed.

For example, in the potato soup recipe, she insists you pass the vegetables through a strainer, and not just any strainer, “a fine strainer,” and continues to observe “increasingly that most average cooks … grow careless about sieves and strainers. They usually compromise after a few years in the kitchen with one general-utility implement that will cope more or less with their normal duties. Tut tut tut!”

MFK Fisher likely would be horrified by my use of a general-utility immersion blender but, what can I say, it works.

I haven’t finished How to Cook a Wolf yet, but I am liking it very much. Fisher wrote the book during World War II as a way to encourage good cooking and living in a time of shortages and ration cards. She believed “that one of the most dignified ways we are capable of, to assert and then reassert our dignity in the face of poverty and war’s fears and pains, is to nourish ourselves with all possible skill, delicacy, and ever-increasing enjoyment. And with our gastronomical growth will come, inevitably, knowledge and perception of a hundred other things, but mainly ourselves.”

She gives recipes for mouth wash and soap and tomato soup cake. She gives lots of advice; she tells funny stories. Half the time I have no idea what she is talking about, and half the time I relish every sentence: “Probably the most satisfying soup in the world for people who are hungry, as well as for those who are tired or worried or cross or in debt or in a moderate amount of pain or in love or in robust health or in any kind of business huggermuggery, is minestrone.”

Anyway, Friends, it was 1 degree this morning. Winter has arrived. If you haven’t prepared for soup season, here’s a quick review of the essentials: homemade stock, vegetable or chicken, plastic quart containers for freezing that stock or soup, a good peeler, a sharp knife, etc.

I served the soup with some herby croutons, but mini loaves of bread would also have been fun. I split the peasant bread dough into four and baked the loaves in empty McCann steel cut oat tins. 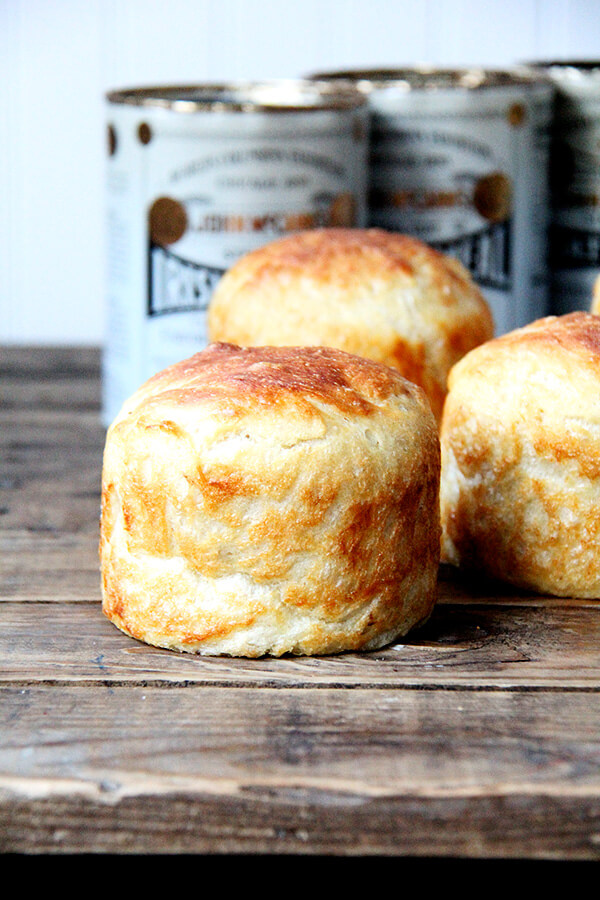 Adapted from MFK Fisher’s How to Cook a Wolf