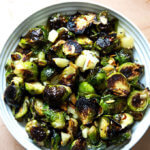 These roasted balsamic Brussels sprouts, a recipe from the Franny’s cookbook, are simple and delicious. Toasted almonds and Manchego cheese make it a hearty vegetable side dish, as perfect to serve alongside a simple roast chicken as a Thanksgiving turkey.

A few weeks ago, I found myself at the library with Ella looking for yet another Calvin and Hobbes book. Once I found it, I ducked around the corner to the cookbook section for a quick peek and spotted Franny’s, a cookbook I did not know existed.

Recently, in place of buying fancy white balsamic, I reduce cheaper, conventional white balsamic to concentrate its sweetness and thicken its consistency.

A Note About Pecorino & Manchego

I learned about Franny’s from Joshua McFadden’s Six Seasons, which includes a recipe for the “kale salad that started it all,” which Joshua created while working at Franny’s. Most recently, I made Melissa Clark’s seared broccoli and potato soup, which was based on a soup made at Franny’s and which, as it turns out, is also included in Franny’s the cookbook. There’s a recipe for the zucchini version of the soup, too.

A quick flip through the book convinced me I needed to take it home, but I’ve since purchased it. It’s so good! Friends, if you are fans of Six Seasons, I think you’ll really love this one, too. The subtitle is “Simple. Seasonal. Italian.” — what’s not to love? — but what I’ve been enjoying most is seeing glimpses of Joshua McFadden’s food in the pages. It’s not the same, but similar.

Friends, your Thanksgiving menus are likely set, but if you’re still looking for ideas, this might be a good one to consider.

PPS: All the Vegetable Side Dishes 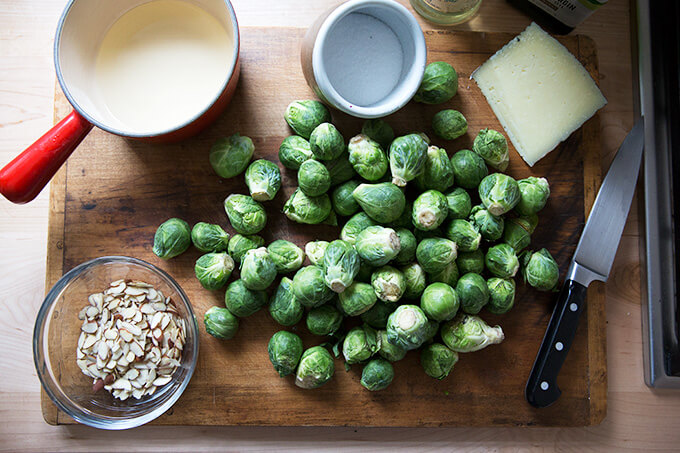 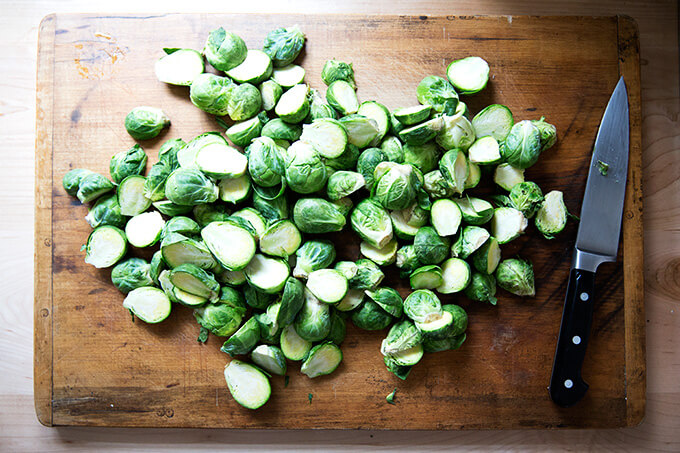 Toss with olive oil and salt. 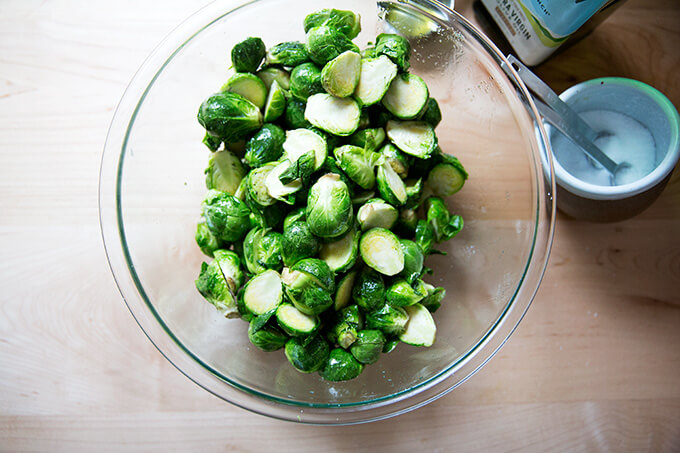 Spread onto a sheet pan — this is a large sheet pan. 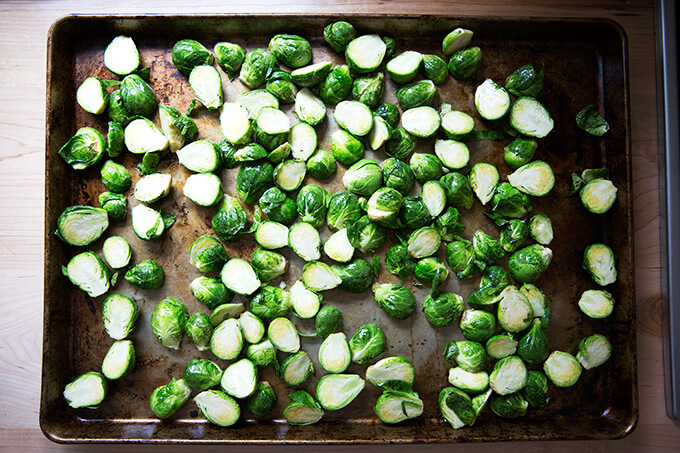 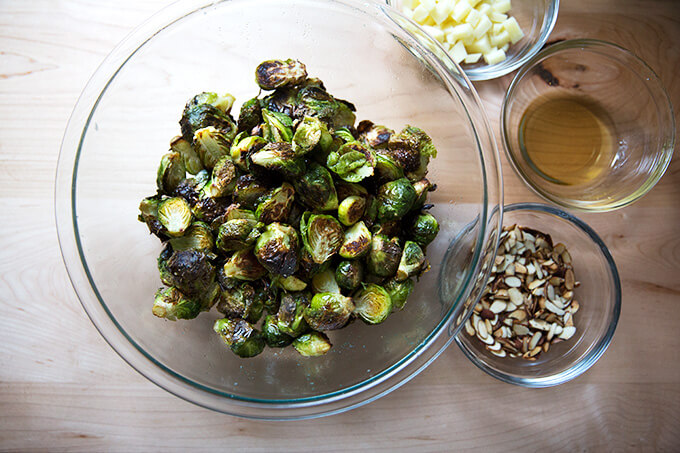 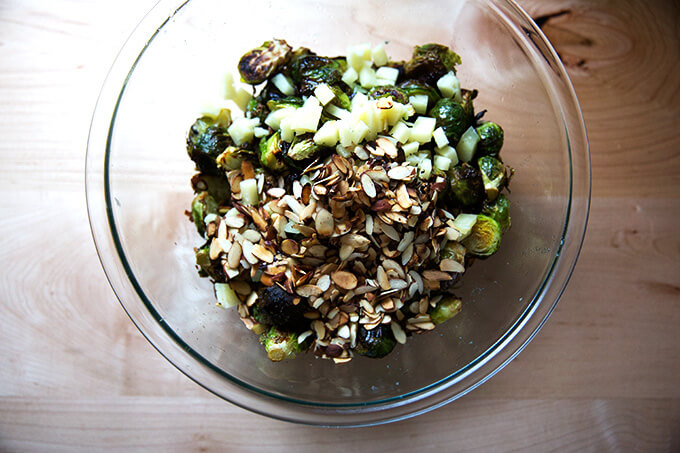 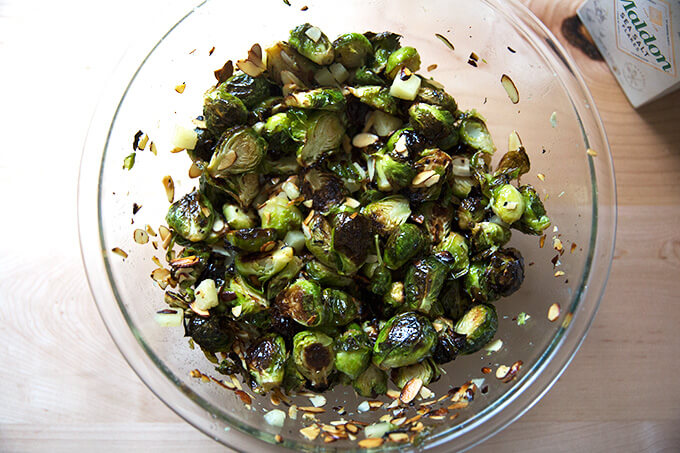 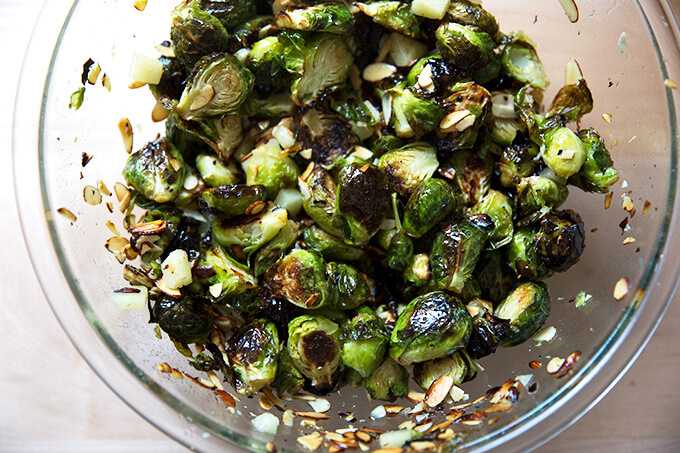 Notes: I made some changes to the recipe, so if you want to follow the original recipe, omit the vinegar, and use 2 tablespoons fresh lemon juice or more to taste.

Also, the original recipe calls for roasting the Brussels sprouts at 500ºF for 20-25 minutes. I’ve reduced the heat to 450ºF, which I find still gives the sprouts a nice char, while allowing them to cook all the way through. Original recipe also calls for whole almonds, which you toast and chop. I used sliced almonds for simplicity. (Lazy me.)

9 Comments on “Roasted Brussels Sprouts with Manchego and Almonds”