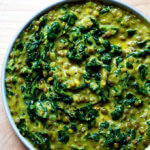 This curried lentil recipe, a vegan one-pot wonder, is spiced with turmeric, mustard seeds, cumin, and fresh ginger. Coconut milk offers a richness and subtle sweetness, balancing out the heat and spice. A heap of kale (or spinach) makes it a meal.

It’s getting to be that time of year: when nothing is sounding particularly delicious, when I’m over roasting root vegetables, when I’m not craving anything, when I find myself staring at the pantry, then inevitably reaching for the lentils and spices and coconut milk.

I’m not even sure why I made this recipe — I have two other curried lentil recipes that I love — but as I reflected (as one does after eating lentils?), I realized there were several influences:

How to Make Curried Lentils

This is the basic process for making curried lentils:

This is a dish that can be tailored to your liking by adding more or less of any of the spices, and it’s forgiving, too — if you don’t have a spice or two, it will likely turn out well anyway.

This version comes from Milk Street, and I’ve made a few small changes, which I’ve noted below. The most significant difference is the use of French green lentils, which hold their shape, in addition to red, which break down. The combination of textures is nice.

Here’s the play by play: Gather your ingredients.

These are the two types of lentils I use:

A microplane is great for finely grating ginger.

Sweat the minced onion and smashed whole garlic cloves in coconut (or other) oil.

Add the lentils, water, and coconut milk and simmer for about 50 minutes.

Meanwhile, chop up some kale or other greens.

I’ve made a few small changes:

Don’t be afraid to make this ahead of time — it’s even tastier on day two. Recipe doubles well, too. 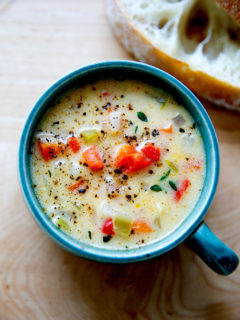