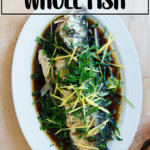 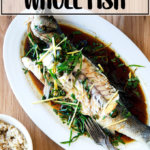 Whole fish, even for many fish lovers, can be a hard sell. The head, the tail, the fins — I suppose it’s just a little too much?

If this perhaps describes you, I’m hoping I can convince you to give whole-fish cooking a go, because I think you’ll fall in love with the method, this Chinese-style preparation in particular.

The recipe, from Alana Kysar’s Aloha Kitchen, can be broken down as follows:

It’s really fun to make and truly one of the most delicious recipes for fish I have every made. As suggested, I’ve been serving it with rice, which tastes especially good with the sauce.

Before opening Aloha Kitchen, I would never have thought to make this dish at home. Steamed whole fish is something I often order out, because it’s consistently good. It’s also something I’ve always feared would never taste as good at home, one of those Chinese dishes that just tastes better, for whatever reason, in a restaurant.

But Alana’s recipe has proven otherwise: it’s simple and delicious. I hope you give it a go.

Incidentally, Aloha Kitchen is all about local Hawaiian food, which Alana describes as: “Creole cuisine built on the many influences of Hawai’i’s early immigrants.” These influencers include Hawaiians, Westerners, Chinese, Japanese, Portuguese, Koreans, and Filipinos. The foods of these various cultures are reflected in the recipes in Aloha Kitchen, all of which will make you want to jump on an airplane immediately, hightail it to the first drive-in in sight, and order a plate lunch of loco moco, steamed rice, and mac salad. Meet you there?

Perfect. Can’t wait. OK, back to the whole fish.

Are you convinced? Will you give whole-fish cooking a go? Or are you already an adopter?

Here’s the play-by-play: Gather ginger, cilantro, scallions, and a hot chili, if you wish. 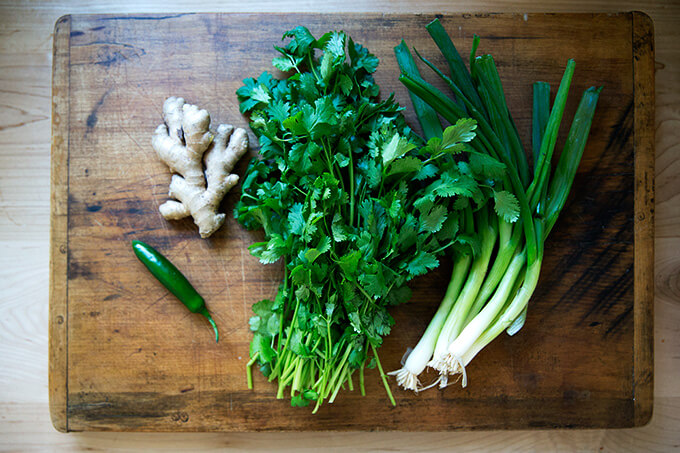 Cut some of them coarsely for steaming… 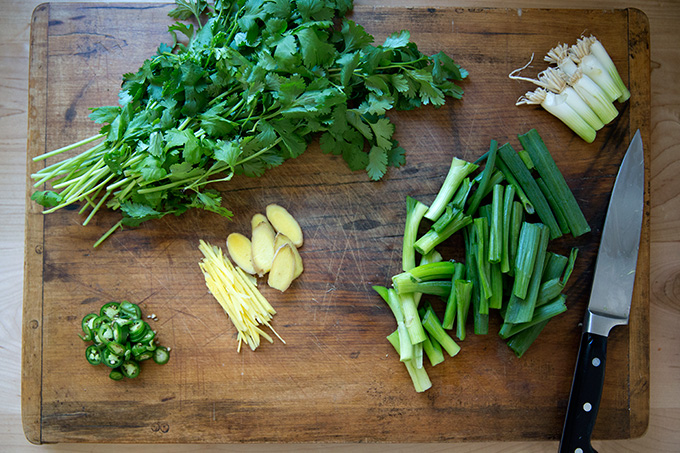 … and some finely for garnish. 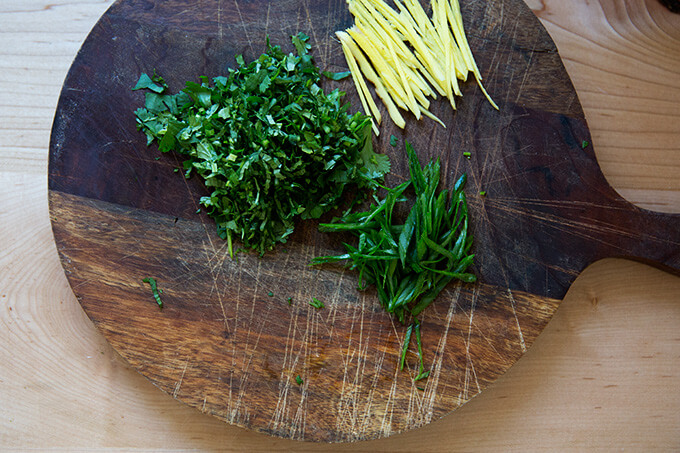 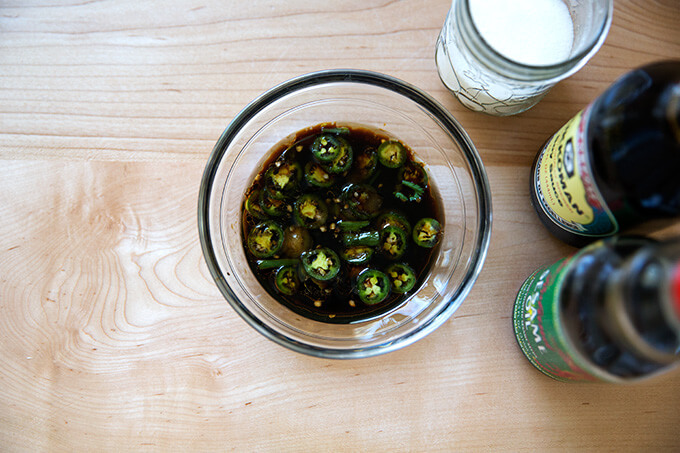 For this recipe, a mild, white-fleshed fish is nice. I’m using Branzino. 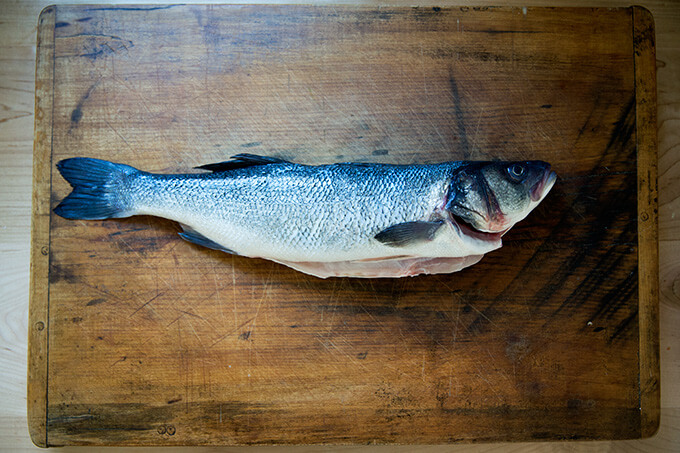 Make slits in the Branzino and stuff each with a coin of ginger and a slice of scallion. 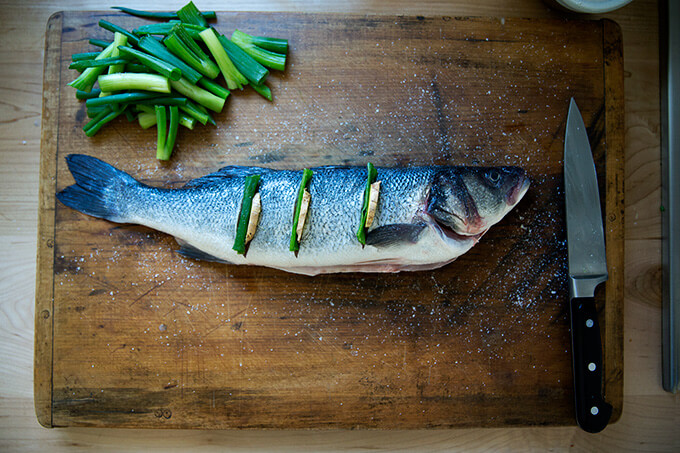 Prepare a steamer basket — I’m using a cooling rack — with cilantro, ginger, and scallions; lay the fish on top. 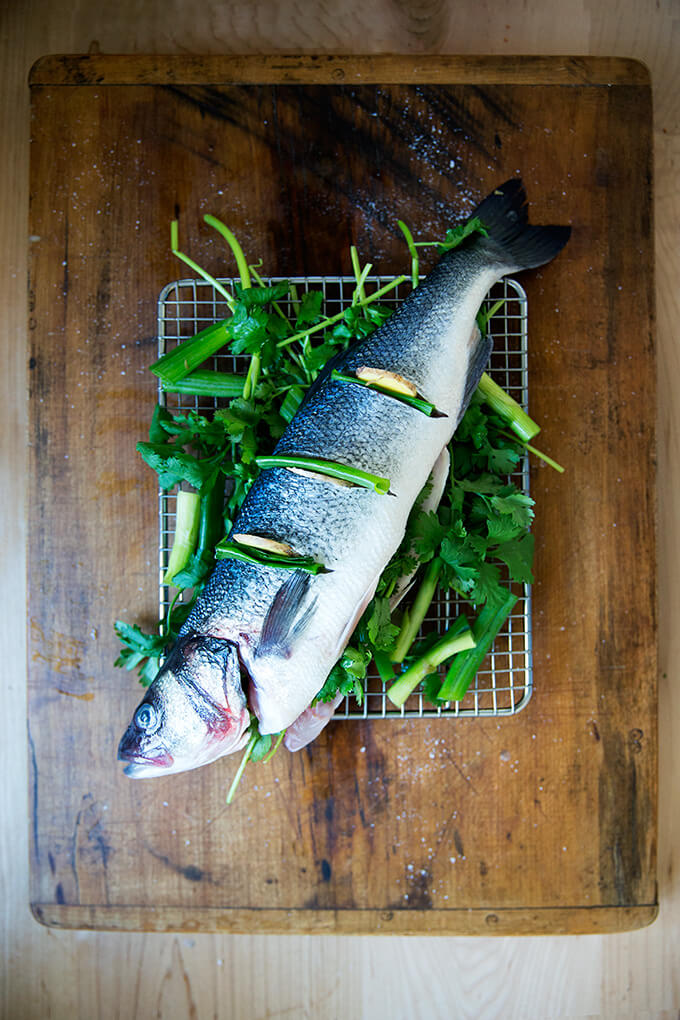 Bring water to boil in a wok or other wide vessel. 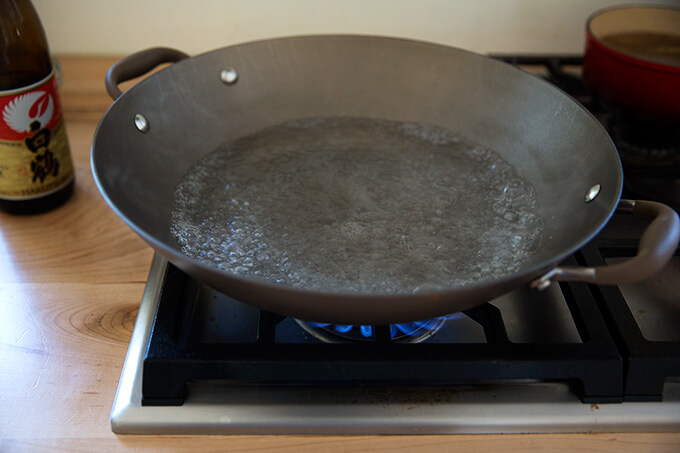 Lower in the fish. 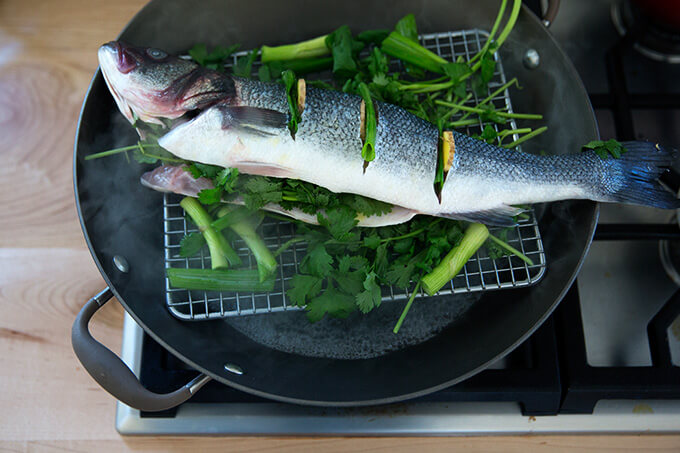 Pour 2 tablespoons of sake over top, then close the lid. 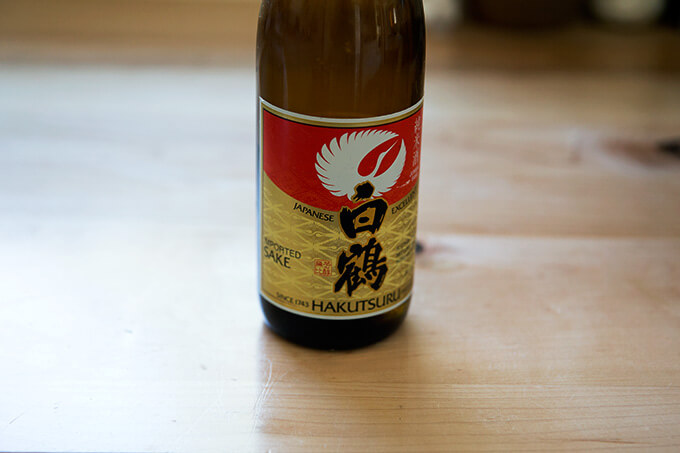 Steam for about 10 minutes. Near the end of cooking, heat 2 tablespoons of olive oil in a small pot until it shimmers. 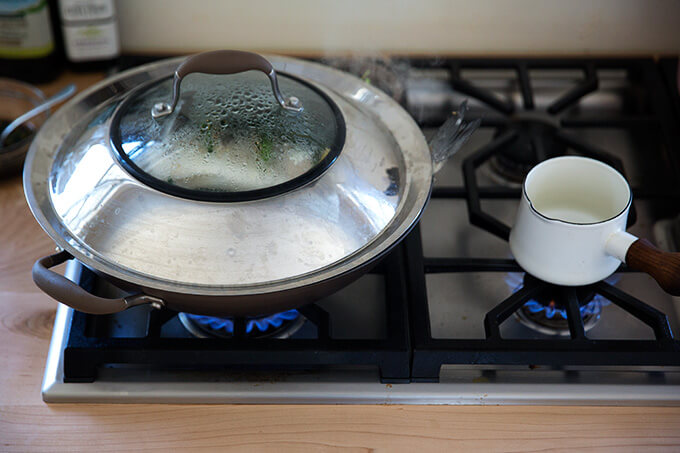 Transfer fish to a platter, and pour the hot oil over top first. Heat the soy sauce mixture in the now empty pot, and pour that over top, too. 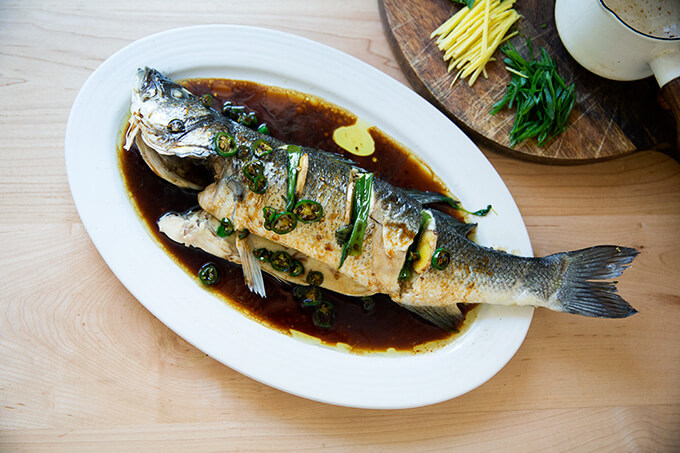 Garnish with slivered ginger and herbs. 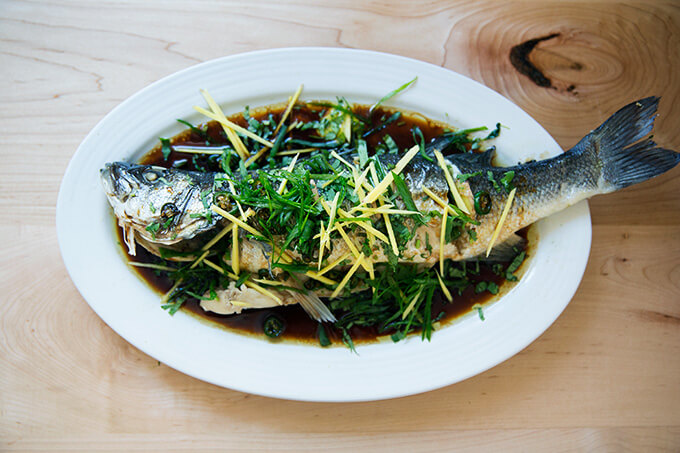 So good with rice. 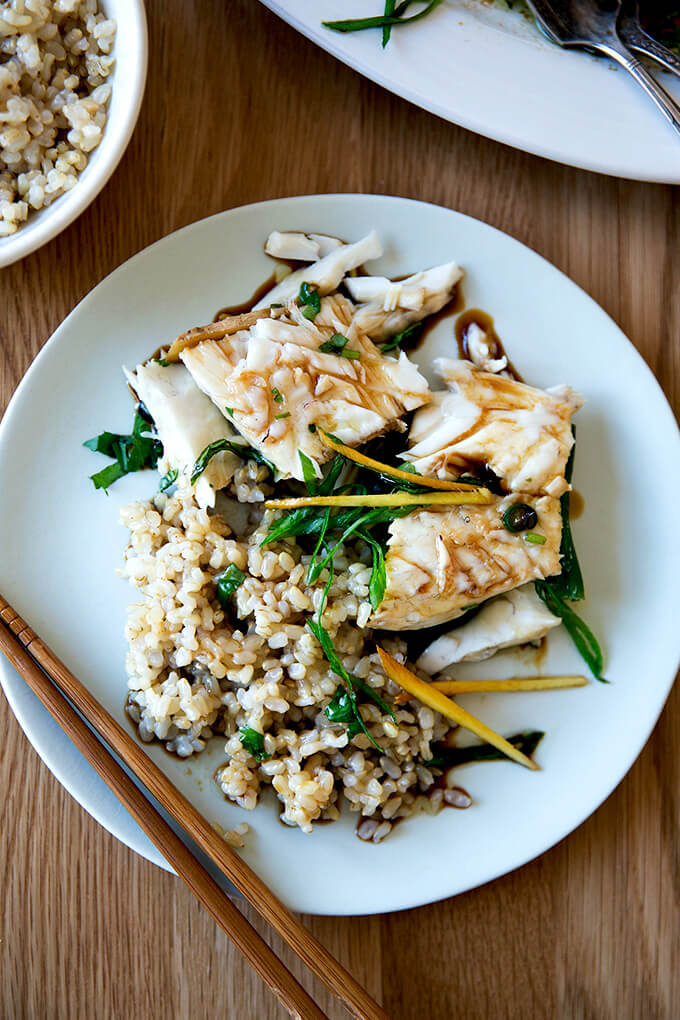 This is the recipe I use: Perfect Instant Pot Brown Rice. 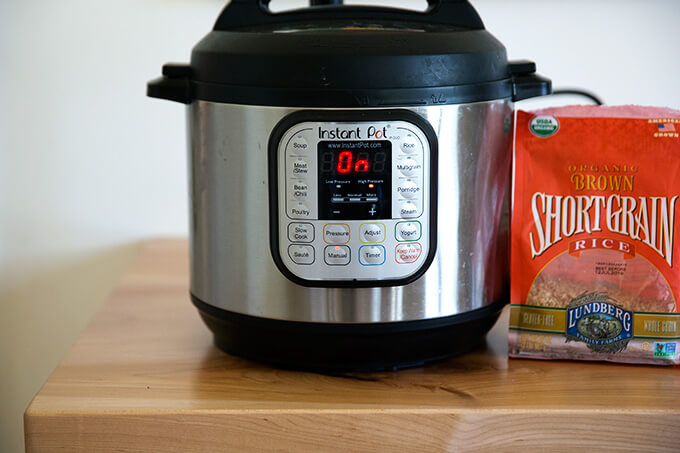 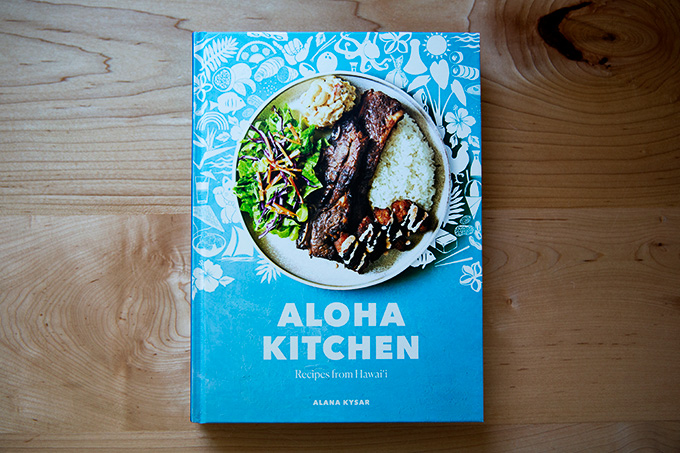 For steaming the fish: