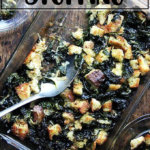 A great way to get a jumpstart on Thanksgiving preparations is to make stuffing and freeze it.

Below is the recipe I love, an adaptation of the stuffing in my cookbook, Bread Toast Crumbs, and includes kale and caramelized onions. After 45 minutes in the oven, it emerges with a crisp golden exterior and a creamy center, flavorful enough to eat on its own, but welcoming to many a relish, sauce, gravy, or anything else the Thanksgiving plate has to offer.

Know you can customize the seasonings and add-ins to your liking.

How to Make Freezable Stuffing

Gather your ingredients: I love my mother’s peasant bread for stuffing, The crust is crisp and buttery, but not super thick. If you are using an extra-crusty loaf, remove the crust. For this recipe, you’ll need kale, onions, an egg, chicken stock, butter, and olive oil.

Tear or cube up the bread and toss with olive oil and salt.

Transfer to a sheet pan and …

… and sauté them until they are somewhat caramelized:

Pile the onions on top of the kale and toss to combine.

Toss kale and onions with bread, stock, salt, and pepper: If you want to keep this vegetarian, use vegetable stock. Otherwise, use chicken stock or turkey stock. Once the kale, onions, bread, stock, salt, and pepper are all tossed together, taste it. This is when it’s important to get the seasoning right: the mixture should taste well seasoned, almost like a panzanella salad—it should taste so good, in fact, you wouldn’t mind stopping right then and there, calling the dish done. But keep going!

Whisk together an egg with a little bit more stock, then add to the bowl of greens/bread. The addition of an egg helps bind the stuffing together.

Cover with foil. At this point, you can either freeze the pan or transfer to the oven.

The stuffing bakes covered for 30 minutes, then uncovered for 15 to 20 minutes.

This is adapted from the stuffing recipe in my cookbook, Bread Toast Crumbs.

20 Comments on “Freezable Stuffing with Kale and Caramelized Onions”