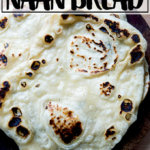 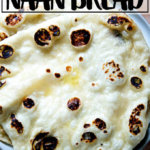 Naan is one of the simplest bread recipes you could make. There is no kneading, which allows the dough to come together very quickly, and after a short rise, you simply divide, roll, and griddle. The dough is so soft and tender thanks to yogurt, and a brush of melted butter out of the skillet makes them completely irresistible!

My friend Deb messaged me last week with a few questions about making naan. I hadn’t made it in ages, and having recently revisited and loved making homemade tortillas, I felt up for a little project.

As you might imagine, if you search the internet for “naan”, you will find all sorts of recipes, nearly all of which include yogurt, some of which include oil, and others that include eggs.

But what has always perplexed me about naan recipes is the variety of leavening agents. I’ve seen recipes that call for:

Though I knew in my heart I would likely go with a yeast-only naan, I felt the need to explore a little bit. Would there be any reason to include a chemical leaven (baking soda or powder) with yeast? Any reason to use all three leavening agents? Any reason to forgo yeast altogether?

Before I share my results, shall we quickly review the difference between baking soda and baking powder? This is something I will never ever commit to memory, but I enjoyed the recent refresher. This Bob’s Red Mill article was particularly helpful and interesting.

Friends, making naan is SO much fun. The dough takes no time to whisk together, rises relatively quickly (just over an hour), and each naan cooks for a minute and 30 seconds stovetop.

I would be happy eating naan and naan alone — sprinkled with sea salt it is irresistible — but it is an especially nice accompaniment to many a stewy dish, namely lentils and curries. Here are a few ideas:

Here’s the play-by-play: Combine 2 cups flour, 1 teaspoon instant yeast, and 1 teaspoon kosher salt in a large bowl. As always, a digital scale is best for measuring. (Weight measurements included in the recipe)

Pour the liquid into the dry ingredients, and stir with a spatula to form a ball. You’ll likely need to knead with your hands for about a minute to get the dough to come together (see video for guidance.)

Cover the bowl and let it rise in a warm spot for about an hour and 15 minutes, or until the dough looks slightly puffed.

Turn the dough out onto a floured work surface.

Divide the dough into 4 portions.

Ball each one up.

Heat a cast iron skillet over high heat till it’s very, very hot. Place one round in, cover, and cook for 1 minute. Uncover, flip, and cook for 30 seconds.

Brush each round with melted butter once it is out of the pan.

Stack the cooked, buttered naan on a plate or platter and cover with a towel till ready to serve.

Friends, these are sooooo yummy ….