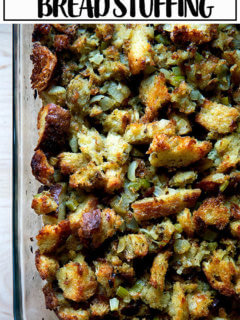 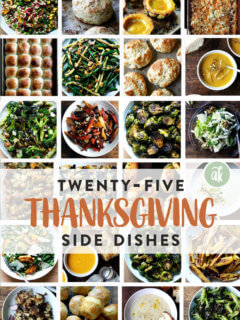 Thanksgiving is shaping up to be quite different this year, not so much the cozy party of twelve I had originally imagined, but an even cozier party of six, a fancier family dinner, the humans surrounding the table, with any luck, a bit more presentable than usual.

Below you will find a recipe for a very classic bread stuffing from my cookbook, Bread Toast Crumbs. It’s seasoned with Bell’s Seasoning, which, if you are unfamiliar, is a finely ground mix of rosemary, oregano, sage, ginger, marjoram, thyme, and pepper. Just pulling out the box every year makes me happy, filling me with nostalgia for Thanksgivings past, occasions attended without fail by all of my favorite people.

Below you will find a recipe for a no-frills stuffing: olive oil-toasted bread tossed with sautéed onions and celery, Bell’s seasonings, and copious amounts of butter. It, along with the kale version, hands down every year is my favorite part of the Thanksgiving meal.

Know you can customize the seasonings and add-ins of this recipe to your liking. Also: you can make it ahead and freeze it. See instructions in the post for how to freeze it.

A round-up for 25 Thanksgiving side dishes, plus a classic bread stuffing from my cookbook, Bread Toast Crumbs.

Bell’s Seasoning is readily available at most grocery stores. It’s a mix of finely ground rosemary, oregano, sage, ginger, marjoram, thyme, and pepper. If you can’t find it, I would imagine using some combination of the noted dried herbs would work. A smaller amount of chopped fresh thyme, rosemary, sage, and oregano would also be nice.