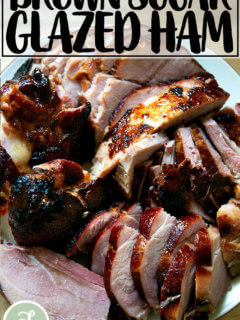 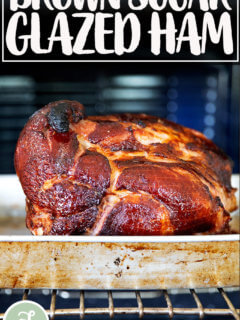 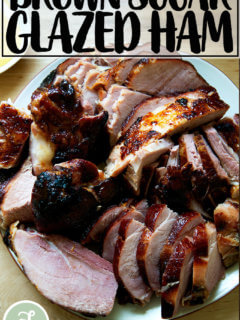 This oven-baked ham recipe is so simple, with no scoring and no studding with cloves. This recipe uses a moist heat cooking method for the first half, and the ham is finished with a blast of high heat to caramelize the surface. The result yields meat that is juicy, tender, and full of flavor. This baked ham recipe is perfect for entertaining!

Last Christmas, I bought a half, bone-in ham from Dakin Farm. I scored it, studded it with cloves, and baked it as directed for 10 minutes a pound at 325ºF. During the last 15 minutes, I cranked up the heat and brushed it with a simple glaze, a mix of brown sugar, maple syrup, and freshly squeezed orange juice.

In my post Christmas after-action report, I wrote: “The ham was spectacular; the mustard sauce outrageously delicious.”

And so I emailed Dakin Farm: To Score or Not? A man named Eric wrote me back and said, “My advice to everyone is to add a little water to the pan and cover with foil.  This really helps in preventing the ham from being dry.”

He also noted that studding with cloves is not necessary, but it won’t dry the ham out either. And added that glazing is nice for visual purposes.

This all made sense to me, and the next time around, I followed his advice. I roasted my unscored, un-cloved whole ham (a 13-pounder) for an hour and 45 minutes at 325ºF in a pan with a little bit of water covered in foil. For the last 30 minutes, I removed the foil, cranked up the heat to 425ºF, and generously glazed the ham twice at 15 minute intervals.

The result? A beautifully burnished, glazed ham with super moist, tender meat. And no thanks to anything I did: the meat was super flavorful.

The Secret to Baking A Good Ham?

… lies in the ham. If you buy a good one, you’ll bake a good one. If you buy a bad one, you won’t. No glaze or scoring or cooking technique will save a bad ham. You’re not marinating or brining a ham (and how nice!) — you’re simply heating it through. And the glaze, while delicious, doesn’t penetrate beyond the outer layer.

As you can gather, I am a huge fan of Dakin Farm (no affiliation here! just a fan!) For as long as I can remember, my Vermont aunt and uncle always have had some sort of Dakin Farm ham product on hand when we visit, and it is always fabulous. I’ve purchased both their whole and half hams, and they never disappoint. A half ham will feed at least 12 people, making the cost per serving about $4.66.

My mother’s advice regarding ham is to never buy a spiral or frozen ham. One year, I bought just that: a frozen, spiral ham (from a highly regarded source). It looked beautiful emerging from the oven — and I thought: just this once, I’ll show her! — but in the end, it was dry and flavorless. Should have known.

Friends: If you have any ham-baking tips or sources for favorite hams, please share in the comments.

A ham glaze recipe should include something sweet — brown sugar, sugar, honey, maple syrup, etc. — which will promote good caramelization in the oven. There is no need to glaze the ham throughout the entire cooking process — during the last 30 minutes (with the oven cranked up to 425ºF) will suffice and will leave the ham beautifully burnished.

To make this glaze, stir together:

Halve the recipe if you are making a half ham.

How to Roast a Whole Bone-In Ham

Here’s the play-by-play: Place ham, fat side up, in a large roasting pan. Add 2 cups of water, roughly, or enough water so that it reaches 1/2-inch up the sides of the pan.

Cover the pan with foil and transfer to a 325ºF oven.

Transfer it to a small liquid measure for easy brushing (if you wish):

Thirty minutes before the ham is cooked (see recipe box for timing notes), remove the ham from the oven, remove the foil, and increase the oven temperature to 425ºF.

Brush the ham with the glaze, and return it to the oven for 15 minutes:

Remove the ham and give it another brush with the glaze. Return it to the oven for a final 15 minutes.

Remove it from the oven:

Transfer the ham to a board to rest for at least 20 minutes before carving.

Remove as many large lobes from the ham as possible; then carve into slices:

Transfer to a serving platter:

Don’t forget the ham sauce! It’s so, so delicious.

Tend to the ham bone (and removing as much meat as possible from it) after dinner:

Save the bone for split pea and ham soup. Or freeze for up to 3 months.

This is a very simple baked ham recipe. There’s no scoring and no studding with cloves, because neither of those steps is necessary. Using a moist heat cooking method for the first half of the process, followed by a blast of high heat at the end to caramelize the surface will yield a beautifully burnished ham with moist, tender meat.

I am a huge fan of Dakin Farm hams (no affiliation here … truly just a long-time fan since my VT aunt and uncle introduced me to their products years ago.) I think the secret to making a good ham lies in the quality of the ham itself.

For the glaze (halve this recipe if making a half ham):