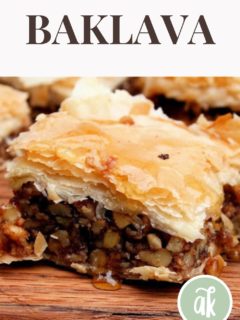 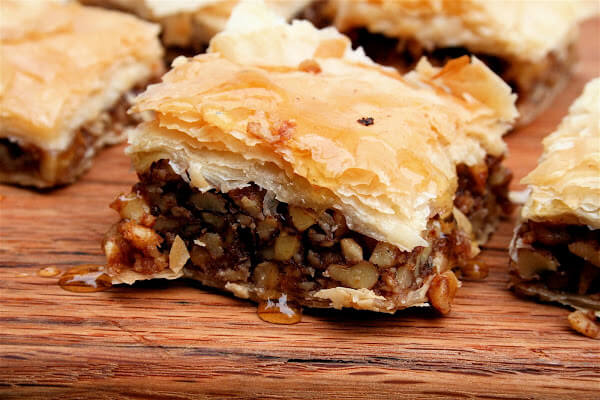 This past Friday night, after dinner at Buddakan with nine of my high school friends followed by an evening of dancing at Plough and the Stars, two of my friends and I found ourselves famished back in my apartment. Luckily, I found some trusty items in the pantry: popcorn, frozen pizza dough and a whole tray of baklava.

I set to work in the kitchen. I heated oil in a saucepan for the popcorn. I preheated the panini machine. I unwrapped the pizza dough and threw it in the microwave to defrost/rise instantly. (This wasn’t a frozen pizza, rather an unbaked ball of dough.) I had only completed a fraction of my prep work when my friends wandered into the kitchen to inspect — they were really hungry.

Both asked why I had placed a pot on the stove. After explaining the non microwave popcorn process, I handed them the tray of baklava and guided them back into the living room. Kristin happily tucked into the nutty, honey-laden dessert, but Liz, after just a few bites, demanded her homemade pizza! I worked furiously in the kitchen to bring them more food. I rushed them the bowl of popcorn, but neither was impressed: The ratio of unpopped to popped kernels was probably 2:1. They had a valid argument.

By this point I had rolled the thawed dough into a small disk and thrown it onto the panini machine. After a few minutes, I pulled it off and slathered it with fresh ricotta cheese and fig jam. As a finishing touch, I drizzled some truffle oil — Liz’s favorite ingredient — over the top. I brought the pizza into the living room, where I found Kristin on the couch settling into her food coma and Liz on the air mattress awaiting her meal.

We finished the pizza while recounting the evening, our stomachs aching from laughing, nearly crying, and very likely from eating. Kristin went to bed swearing off baklava forever, and while Liz made no mention of giving up her truffle oil, I think she identified with Kristin’s state.

Fortunately, much to my relief, this bold declaration only lasted so long. Around three o’clock the following afternoon, Kristin admitted she was ready to give what remained of the baklava another go. 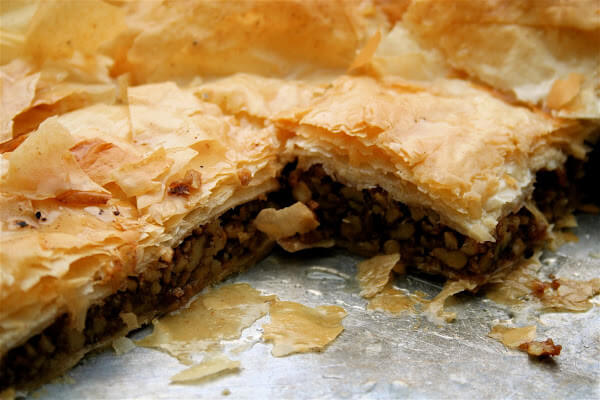 Preheat the oven to 350ºF. Pulse walnuts in a food processor until chopped (not too finely). Remove from processor and place in a bowl with the sugar, cinnamon and cloves.

Grease a 10- by 15-inch pan with one tablespoon of the melted butter. Layer one sheet of fillo dough on top. Spoon one to two tablespoons over the dough — do not use a pastry brush. (It’s ok if much of the dough is left unbuttered.) Layer with another sheet of fillo. Spoon more butter over top aiming for areas of the dough untouched by butter in the previous layer. Repeat this layering process with half of the fillo, about 14 sheets depending on the box. Spread the nut filling evenly over the top of the fillo, then top the nuts with the remaining fillo, layering in the same manner as before.

Brush the top layer of fillo with butter. Using a sharp knife, score the baklava in a diamond pattern. Place the pan in the oven and bake for 30 to 45 minutes, or until golden. Remove from the oven and immediately pour the honey over top.