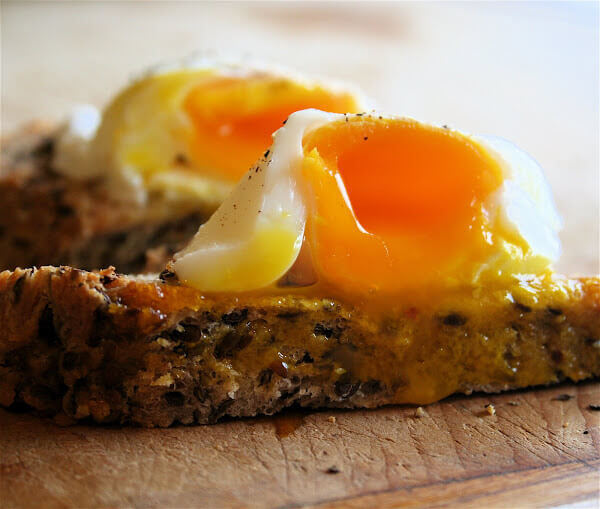 So, as you know, I’ve been eating a lot of eggs. I’ve been cooking them in various ways — scrambled, poached, and even baked into tortilla shells (thanks for the recipe, Ann … next Friday I’ll post my results) — and I’m starting to notice a pattern: Eggs need to be coddled. Pardon the pun, but what I mean is that eggs, prepared in any way, need to be cooked gently — slowly over low heat. And, as I mentioned recently, if you start with really fresh eggs all you need is salt, pepper and a splash of Tabasco.

Now, I haven’t tested my theory on fried eggs, but I will, and I’m guessing this method won’t fail me.

As for the bread you see pictured, I’m still in disbelief that it emerged from the oven looking somewhat like a loaf of bread. Let me explain. I had been reading this book about omega-3 fatty acids and became inspired to make flax-seed bread. I found a recipe on the Internet, but the quantities were given in gram form. Not to worry, I converted the grams to ounces, and then from ounces to cups. ( My digital Salter scale is still in storage.)

I mixed together all the ingredients, kneaded the dough briefly — the recipe told me to do so — and placed the ball in a bowl. Twenty-four hours later, the dough had not budged. I couldn’t bear the thought of throwing it away, however, so I dissolved another packet of yeast in some water, let it bloom and then mixed it with some white flour. I broke the flax-seed rock into my new flour-water-yeast mixture and began kneading. After 10 minutes, I placed the dough in a bowl to rise, I hoped, once again.

Twenty-four hours later, the dough had made a little bit of progress, so I threw it in the oven before it could collapse on me. The results, well, let’s just say, were better than I had expected? Made mostly with whole wheat flour and loaded with flax seeds, this bread tastes a little nutty and very wholesome.

Yesterday afternoon, while we celebrated my uncle Jerry’s birthday, Aunt Vicki sliced up some of this bread, toasted it up and served it with butter and orange marmalade. It actually made a nice little snack. And cousin Jay, after slicing the bread very thinly, made a tasty looking avocado and turkey sandwich. The flax bread, although having the effect of feeling “like a steel glove in the stomach,” as uncle Jerry noted, was a hit. 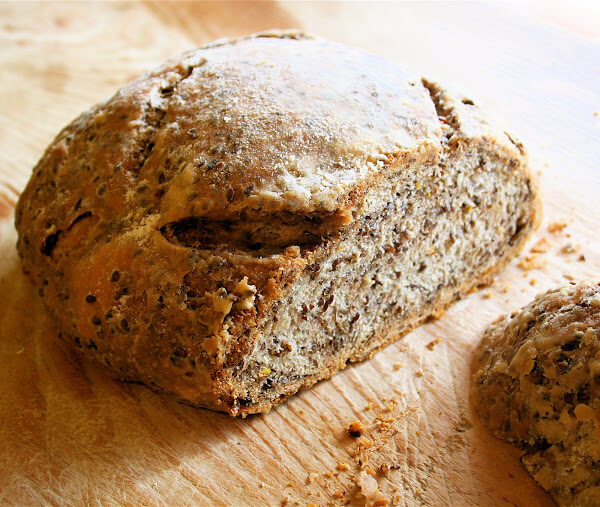 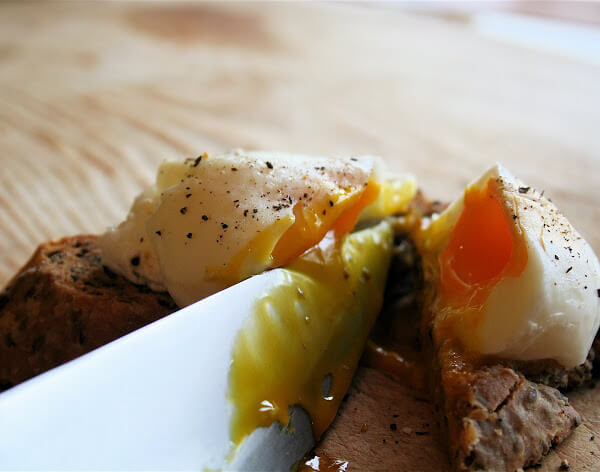 1. Bring a small, shallow saucepan filled with water to a boil. Add a capful of vinegar. Crack eggs, one at a time, into a ramekin or small vessel. Reduce the heat of the pot to just a simmer — seriously, the water should hardly be moving. Using the end of a wooden spoon, swirl the water to create a mini whirlpool. Gently drop the egg into the center of this whirlpool.  Turn up the heat to maintain that very gentle simmer, then add another egg in the same manner to the pan.

2. To test for doneness, remove one of the eggs with a slotted spoon. Gently press the yolk with your finger. If it feels too soft, return egg to water. Cook for a total of about 3 minutes or less. Remove with a slotted spoon and gently dab the top with a paper towel — I lay a paper towel over the egg briefly to absorb the excess water. Serve the eggs over toast. Season with salt, pepper and Tabasco, if desired.