The BEST Focaccia? Right This Way.
Home » Seasonal Cooking » Fall » New Theory: Everything Tastes Better With An Egg On Top?

New Theory: Everything Tastes Better With An Egg On Top? 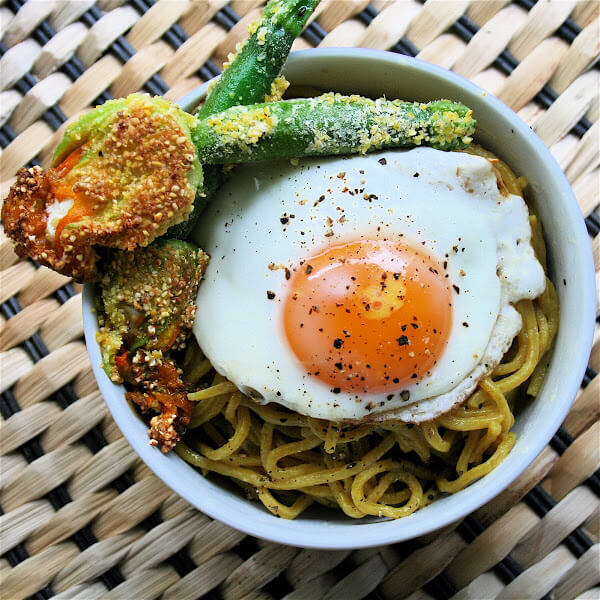 I know. My egg consumption is out of control. I can’t promise the end is in sight either, so please just bear with me as I plow through a few more dozen.

On another note, I have a story to recount about my husband that you might not believe. Last night, Ben almost threatened not to accept my “friend request” on Facebook. I know. Unbelievable. It was one of the sadder moments of my life.

This is what happened. Yesterday after dinner, while Ben was washing dishes, I mentioned that I had just become friends (on Facebook) with one of his old hockey buddies. Great, Ben said, and then admitted to feeling bad about not checking his email more often and rarely responding in a timely fashion to “friend requests.”

“You have a Facebook account?” I asked as I typed his name into the search box. “I’m going to invite you to be my friend.”

Brace yourself, this is where it gets sad. Ben turned to me and said, “OK, but don’t expect … ” stopping mid-sentence upon seeing my face.

It was too late. Ben could utter no words that would repair the damage. “It’s cool,” I said, as the world as I have known it silently shattered. We didn’t speak for like 2 minutes. It was terrible.

When Ben finished the dishes, he hopped on his computer and confirmed my friend request. While my heart still stung, I couldn’t bear the silence, and I appreciated the cyber gesture. I know, deep down, my love of life meant no harm. (I apologize for all the drama … maybe it’s the eggs?) 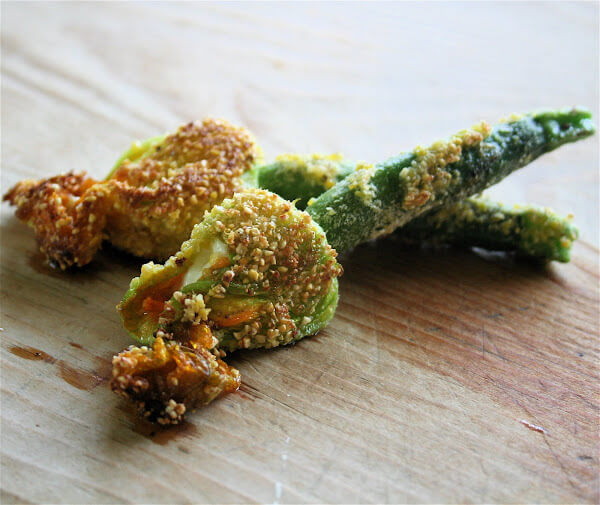 On another note, I learned on Sunday that one of the vendors (I forget the farm’s name) from Carlsbad will be bringing these zucchini blossoms to the San Clemente farmers’ market every week from now until the end of summer. These might be one of my favorite foods.

I think the best way to prepare them is this: Buy some goat cheese. If you feel like it, season it with salt, pepper, some herbs, shallots, whatever. If you don’t, don’t — plain goat cheese works just fine. Place a small — small — amount of goat cheese inside each one. Don’t over-stuff … it doesn’t make them better. Pinch the flower closed. Place a small amount of milk or buttermilk in a shallow vessel. Place a small amount of cornmeal in another shallow vessel. Heat a nonstick pan over medium fire. Add a mixture of oil and butter. Meanwhile, dip each blossom in milk and then in cornmeal. When the butter begins sizzling, add the blossoms to the pan. Let them cook until golden brown. Remove and serve with anything.Yum.

Also, I just tried the curry spaghetti from Delaney’s Culinary Fresh. I have sworn by the red pepper linguini in the past — still my favorite, I think — but this curried spaghetti was awesome. I didn’t add anything to it, except for some reserved cooking liquid, salt and pepper. Oh, and a fried egg.

And I sort of, though not very meticulously, tested my theory about cooking fried eggs slowly. In a nonstick pan, I heated some butter over medium fire. I added the egg when the butter sizzled. I covered the pan, and after a few minutes, when it looked done through the foggy transparent lid, I removed the egg and threw it on my pasta. There is something really special about an egg yolk over pasta. Or rice. Or salad. Or bread. Or everything, I have concluded. 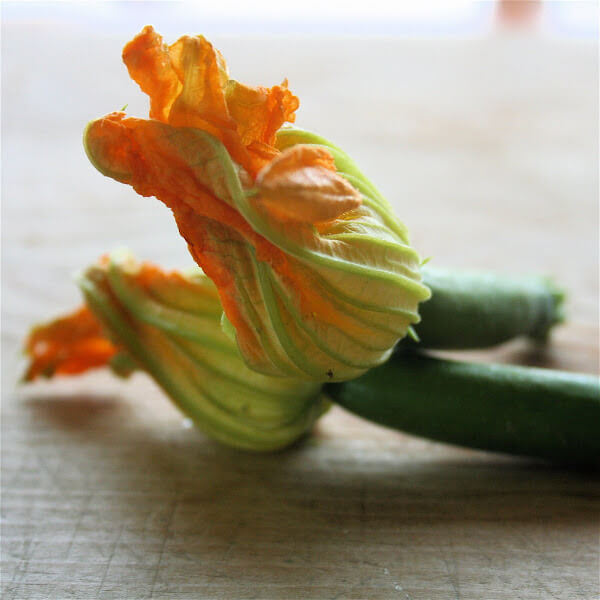 7 Comments on “New Theory: Everything Tastes Better With An Egg On Top?”