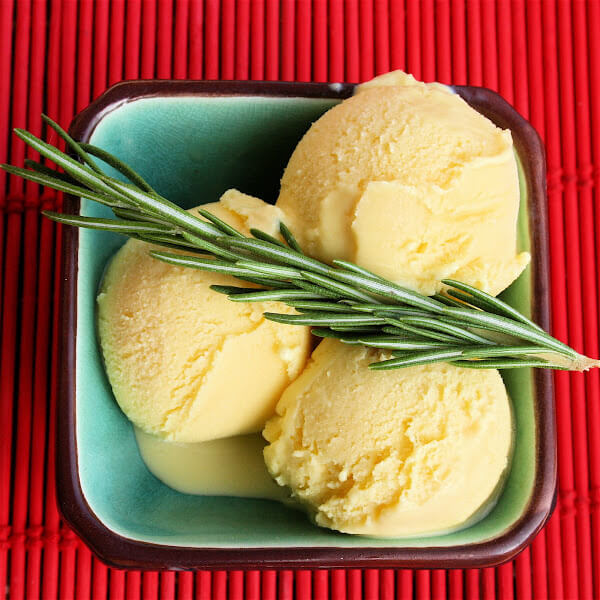 Sometimes I like to test my husband’s taste buds. Here’s an example. The other night, Ben was pacing around the kitchen after dinner looking for some more food. “Can I make you a bowl of cereal?” I asked. Sure, he said. So, I filled up a bowl with a mixture of Kashi Heart To Heart and Barbara’s Shredded Oats, sliced in a banana and poured in the milk … goat’s milk that is. I gave Ben the bowl then returned to the couch.

I could hardly contain myself. “Do you notice anything different?” I asked.

Now, the reason I had goat’s milk on hand is because I had been craving Capogiro Gelato, particularly the rosemary-goat’s milk flavor. Since I haven’t found a gelato shop near me yet, I decided to make my own. I picked up a quart of goat’s milk at Henry’s Market one day and set to work. I followed a recipe I like for vanilla gelato in Mario Batali’s Molto Italiano cookbook. I steeped the rosemary for about 30 minutes, tempered the egg yolks, chilled the mixture and then froze it in my ice cream maker.

The result? The gelato had a very nice texture, and the flavor was, well, shall I say, unique? The rosemary was a little too powerful. I’ve written the recipe below with a much shorter steep time.

I don’t know how Capogiro does it, but one trait I love about their rosemary-goat’s milk gelato is its pure white color. Some of their gelatos are made with eggs, some are not, and they’ll tell you if you ask. I forget if their rosemary gelato contains eggs or not. Also, I have asked many times how gelato differs from ice cream, and I never seem to remember the answer, but this is what is coming to mind: Gelato is churned more slowly. Gelato is more intensely flavored. And, according to Mario Batali’s cookbook, gelato is lower in fat. 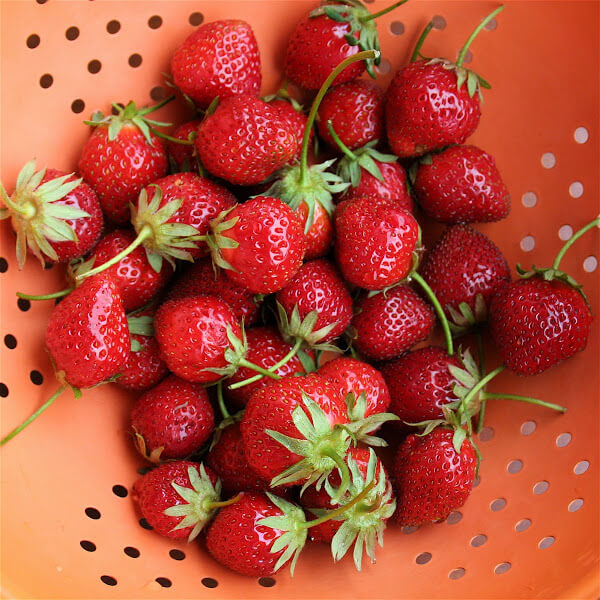 I should note, too, that the rosemary I used came from the Vegetable Shop at the Chino family farm in Rancho Santa Fe. I have heard so much about this stand from friends living in Del Mar, and over the weekend, I finally got to see it. I picked up the most beautiful produce: two bunches of mizuna; two bunches of Swiss chard; two bulbs of green garlic; and a pint of the strawberries pictured above and below, which lasted about five minutes in my apartment. They were so sweet! They sort of tasted like grapes. The man at the stand called them “French” strawberries. Yum.

Oh, and next week, stay tuned, I have five more muffin recipes to share with you. I’m seriously up to my eyeballs in muffins.

1. In a medium-sized, heavy-bottomed saucepan, heat the milk with ¼ cup of the sugar, the rosemary and a pinch of salt. Bring the mixture just to a boil, making sure the sugar has dissolved. Turn off the heat, remove the rosemary and discard.

2. Meanwhile whisk the yolks with the remaining sugar until the mixture is pale yellow. Ladle some of the milk into the eggs whisking constantly. Repeat until half of the milk has been added to the eggs. Return the egg-milk mixture to the saucepan and cook over medium heat, whisking constantly. DO NOT BOIL. When the mixture begins to thicken and coats the back of a spoon, remove pan from heat and strain into a shallow vessel. Do not second-guess yourself: When the mixture thickens, it is done. (I returned mine to the heat and it curdled. Too stubborn to start over, I strained the mixture through a very-fine chinois. It seemed to work — the gelato did not taste eggy at all. Try to avoid having to do this, however.)

3. Place vessel in the refrigerator until cold. 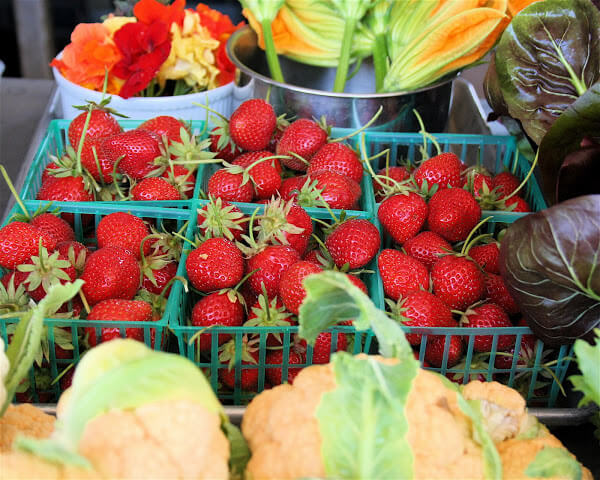