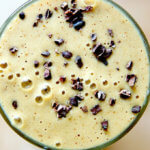 A trend I’ve observed among the spring 2019 cookbooks is wellness and plant-based eating. Of the many, Well + Good is perhaps the most overtly focused in these areas, with recipes to improve skin, sleep, mood, digestion, energy, focus, and sex (…watch out! Alexandra’s Kitchen is getting ris-que!!).

The book, written by journalists Alexia Brue and Melisse Gelula, who launched the website Well + Good a decade ago, includes recipes from experts and authorities in the health and wellness sphere, including Mark Hyman, Venus Williams, Misty Copeland, and Bobbi Brown.

Also: Marcus Antebi, founder of the juice chain Juice Press, who, while training as a competitive boxer, altered his diet to consist primarily of cold-pressed juices, smoothies, and salads. His “competitive coffee smoothie” recipe caught my attention for a number of reasons:

I gave it a whirl, cauliflower and all, and couldn’t have been happier with the result: It tastes like a coffee milkshake. You would never know a blast of vegetables is in the mix — cauliflower disappears the way spinach does in smoothies — and how nice to get a little cruciferous boost in your mid-morning (or afternoon) pick-me-up?

I have made one of these coffee smoothies every day since discovering it, and I find myself looking forward to it until I do — it’s such a treat! What’s more, I have reduced my coffee waste to zero. Score!

Let me know if you give it a go.

Adapted from the Well + Good cookbook.

And before you poo-poo the cauliflower, know that you don’t taste it. It disappears the way spinach does in smoothies. For ease of preparation, I purée half a head of cauliflower in the food processor, and I store it in a quart container in the fridge.

Also: I’ve been pouring leftover coffee into a Mason jar and stashing that in the fridge, so I always have cold coffee on hand to make this.

Also: I slice up a banana and stick it in the freezer first thing every morning so it’s nice and cold when I’m ready to make my smoothie.

Place all ingredients in a blender, and purée until smooth. Pour into a glass, and top with cacao nibs if you wish.

22 Comments on “Coffee Smoothie with Dates, Banana, and Cacao”