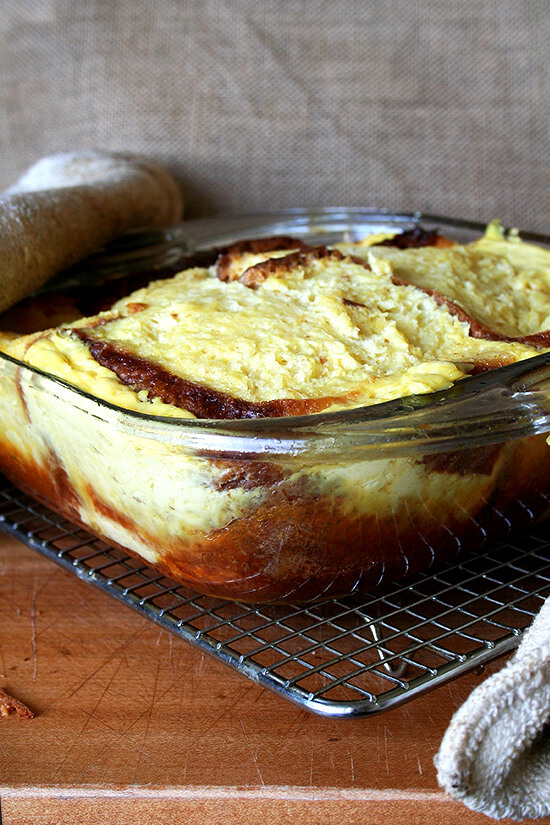 I never expected to receive a return phone call. I had been agonizing over how I was going to make my bread pudding … with fruit baked in it or without? Did Tartine really not add any fruit to the bread pudding while it baked? Their cookbook says without, but I thought I remembered bits of warm peaches dotting the pudding throughout. I needed affirmation before proceeding, and so I placed a call to Tartine itself.

I called about 10 times before leaving a message. I explained that I had read the preface to the brioche bread pudding recipe in the cookbook, which explains that Tartine serves their bread pudding with seasonal fruit lightly sautéed in butter and then heated in a caramel sauce. Was this accurate, I asked? Or did Tartine sometimes bake the fruit right in with the custard and brioche? I left my number, hung up the phone, accepting I would likely have to make the decision on my own.

Not so. Later that day, I turned on my phone to find a message from Suzanne, a lovely Tartine employee. She confirmed exactly what the cookbook says, that Tartine indeed bakes the bread pudding without any fruit in it. They do also warm a seasonal fruit of choice — peaches, berries, apples, pears — in a caramel sauce, the recipe for which I have included below though have yet to test. Moreover, when the busy bees in the bakery remove the pans of bread pudding from the oven, they poke holes in it to let steam out and to create space, and then they pour the warm fruit in caramel sauce over top. Brilliant! Thank you, Suzanne.

I have been meaning to post this for months now, and I am afraid peach season is long over. So, while my picture below is a little dated, I write this with even more confidence in this recipe. You see, I have just returned from a  most wonderful wedding of two most wonderful people in San Francisco, where I was able to sneak in a visit to Tartine with five friends. Together we ate two bowls of bread pudding, one slice of quiche, one croque monsieur, one croissant and one chocolate croissant. As anticipated, the bread pudding triumphed as the table’s favorite. With my new knowledge, too, I was able to discern a caramel flavor permeating the pudding. I must note, too, that the Tartine caramel sauce is as light as a caramel sauce can be. It adds a subtle yet critical flavor, and I most definitely will make it the next time I prepare this bread pudding.

Hooray for apple season! I imagine apples warmed in caramel sauce will make a lovely topping for this most delicious bread pudding.

Just some quick notes here about the recipe:

• I decided to make the brioche from scratch, which was well worth the effort, but also a two-day affair. If you have a good source for brioche, by all means, buy it! The recipe for the bread pudding itself is quite simple and so long as the brioche you purchase is baked in a standard loaf pan and you can slice it into one-inch pieces, you should be able to add an accurate amount of bread to your pudding.

• Really follow the instructions about the ratio of bread to custard. I was shocked by how much more custard there was in my pan than bread, but I trusted the recipe and went with it. That is the key! The bread soaks up all the custard. The key to producing a moist bread pudding is to not crowd the pan with bread. This is by far the best bread pudding I have ever made and I attribute that mostly to sticking to the proportions prescribed in the cookbook.

• The cookbook suggests using a 9X5-inch glass loaf pan. When I made this, I hadn’t yet purchased this size pan but had success with an 8X8-inch pyrex pan I happened to have on hand. I am looking forward to using the real deal next time around. 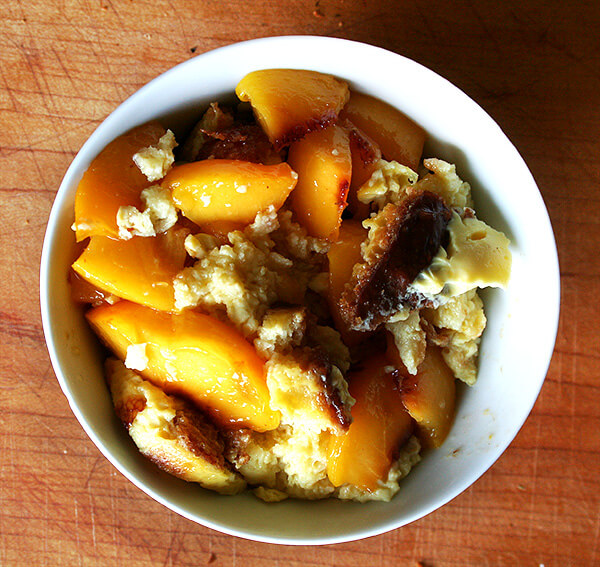 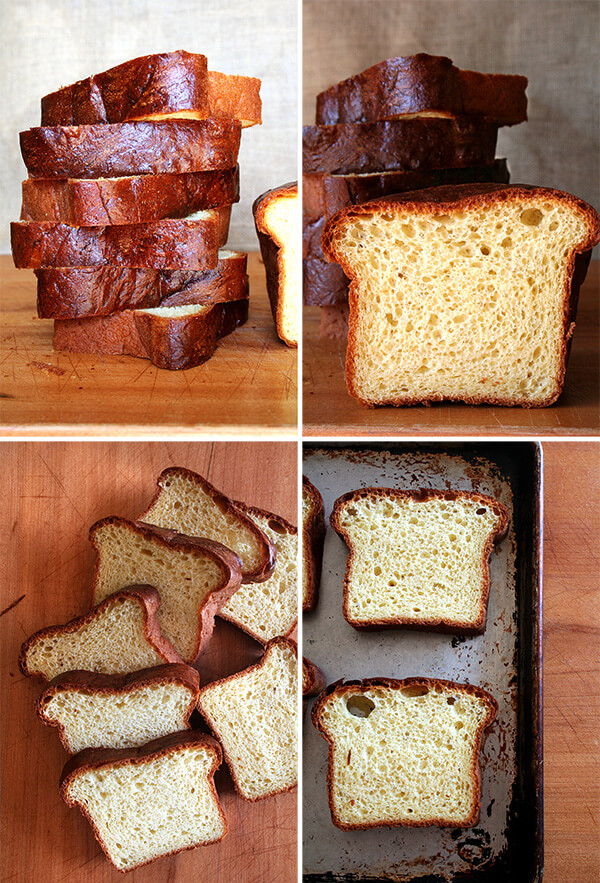 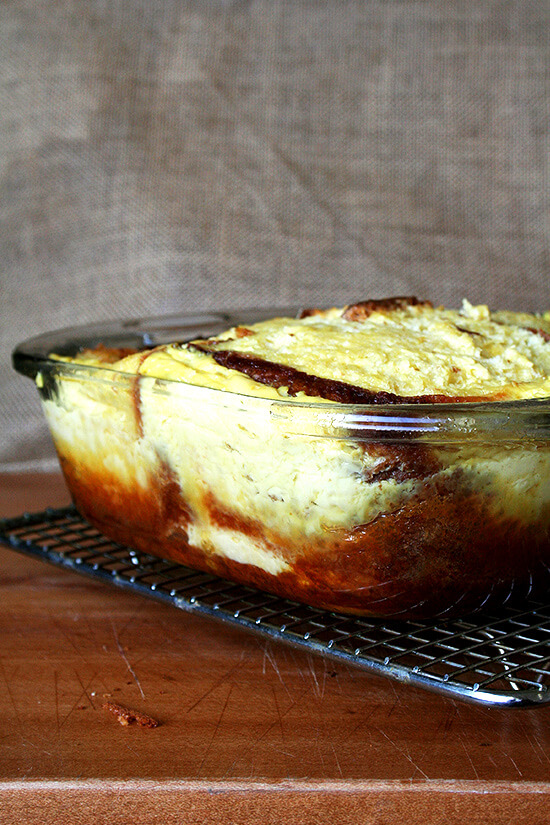 Below are some invaluable notes from the Tartine cookbook. I took their suggestion for what to do with remaining custard. Delectable!

• Never crowd the bread slices in the mold — when a bread pudding is dry, crowding is usually the cause.

• If you use a shallower mold (than a loaf pan), reduce the baking time.

• If you end up with more custard than you need, transform it into a simple dessert: pour it into ramekins, place them in a hot-water bath, and bake in a 350ºF oven until set, about 40 minutes.

• If you have left over bread pudding, chill it, slice it, and fry it as you would French toast.

* I did in fact make the brioche for this recipe, and it is a great recipe. Just a warning, it is quite a process … it takes literally about 2 days to make. If you have a source for good brioche, by all means, use it — buy the brioche … your bread-pudding-making experience will be all the more enjoyable.

Serve with fresh or sautéed fruit.

Use a good-sized pan when preparing this caramel. When the hot cream is added, the caramel will boil furiously at first, increasing dramatically in volume. Have ice water nearby in case of burns.

The caramel will keep in an airtight container in the refrigerator for up to one month.

Indeed it is offensive for you to approach the bla