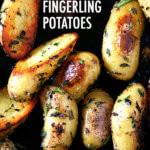 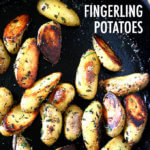 From creamy buttermilk mashed potatoes to cheese-crusted hasselback potato gratin, potatoes can morph into many a form depending on the side dish recipe at hand. But these crispy, herb-flecked fingerling potatoes hands down are my favorite potatoes to eat.

I learned how to make them by the caseload. By the caseload of salt, too. I was working at Fork in Philadelphia and gasped the first time I saw the chef unload a box — literally one 3-lb. box — of kosher salt into a pot, albeit a very large pot, filled with fingerling potatoes, water, many cloves of garlic and several bunches of rosemary and thyme.

Bring the water to a boil, he instructed, then turn off the heat. The potatoes, he ensured, would finish cooking as they cooled.

He was right. The potatoes were cooked perfectly, not the slightest bit overdone or dry, which can happen when potatoes are roasted. And moreover, they were seasoned perfectly, too, not a bit too salty and subtly infused with the flavors of rosemary, thyme, and garlic.

Often I eat these potatoes straight out of the pot without a bit of extra seasoning. They are excellent, too, sliced and tossed into salads.

But when I’m not feeling so lazy, I go the extra mile and crisp them up, as I learned to do at Fork, with a bit more rosemary and thyme and a pinch more salt. And then I splash Sriracha all over them. It’s such a treat. I know you’ll love them, too.

PS: All the Potato Recipes right this way.

How to Cook Fingerling Potatoes in Two Steps

Place potatoes and seasonings — garlic, thyme, rosemary, and salt — in a large pot. Cover with cold water; then bring to a simmer. Depending on the pot you are using and the quantity of potatoes, times will very, but the key is to turn off the burner as soon as the water boils. Often I get asked: “How long should I boil fingerling potatoes?” The answer is one second. As soon as the water boils, immediately turn off the heat and allow the potatoes to cool completely in their cooking liquid.

Once cool, halve the potatoes on the bias; then crisp up in a hot skillet until golden and season with more rosemary, thyme, and salt.

Transfer to a platter and serve immediately.

I learned to cook potatoes this way while working at Fork in Philadelphia. The chef at the time cooked fingerlings as directed below, the keys being:

To cook the potatoes:

To crisp the potatoes: