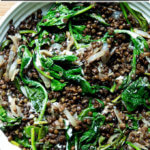 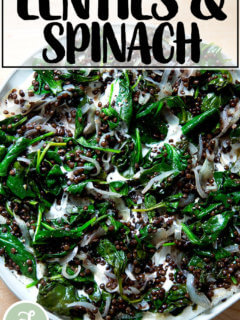 This recipe for black lentils with lightly caramelized onions and spinach is super simple and delicious. The key? A hefty splash of balsamic vinegar that reduces in the pan, offering both sweetness and acidity. Served over a schmear of lemony Greek yogurt sauce or labneh, this has become a favorite weeknight meal.

Black lentils cook quickly, hold their shape, and have a nice texture and flavor. They behave very similarly to French green lentils but cook more quickly. Friends, do you know about black lentils?

I bought them on a whim, and then immediately made this spinach recipe from Stacy Adimando’s Piatti, which calls for garnishing the lentils with a plump ball of burrata. As Ina says: How bad can that be?

I  first made the lentils for my parents who were visiting, and in place of the burrata, I served them atop creamy, tangy labneh (also known as labnah or labne: essentially strained yogurt or yogurt “cheese”).

This has become one of my favorite weeknight meals, another great one to add to your repertoire of lightning fast lentil recipes.

How to Cook Black Lentils

This dish comes together super quickly, but here are a few things I have been doing to get ahead:

Stacy prefers to serve these lentils with burrata, which makes sense — the texture and sharpness of the lentils balances out the creaminess of the burrata. I image fresh ricotta or whipped goat cheese would also work well here. When I can’t find labneh, I’ll stir together a simple yogurt sauce made with Greek yogurt, fresh lemon, and salt. It works beautifully.

Once you make this dish once, you’ll find countless ways to adapt it with various greens, vegetables, and creamy schmears. I hope you love it as much as I do.

Here’s the play-by-play: Gather your ingredients.

Simmer the lentils in one pot; sauté an onion in another.

When the lentils are finished, add some vinegar to the onions and let it reduce.

Combine the lentils and onions.

Get ready to serve.

Smear some labneh across a plate. If you can’t find labneh, you can stir together a lemony yogurt sauce, which works well here: Greek yogurt + fresh lemon + salt.

Spoon lentils over top. I could eat this every night.

Scale this recipe up as needed. I find a half cup of lentils feeds two of us and leaves us with a teensy bit of leftovers. One cup of lentils would feed 4 people comfortably.

Labneh or burrata or Greek yogurt: The original recipe calls for burrata, which of course is delicious. I am loving using labneh here, but if you can’t find it, you could use this lemony Greek yogurt spread: 1 cup Greek yogurt + 1 tablespoon fresh lemon juice + 1/2 teaspoon kosher salt — this is how I’ve been making it most recently as I haven’t been able to get my hands on labneh.

You could also use homemade ricotta, or even goat cheese whipped with some milk to thin to a spreadable consistency.