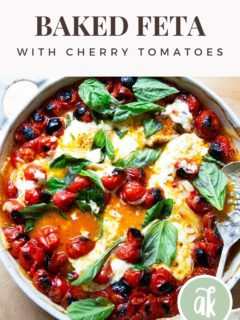 Last Sunday evening, I had planned to make Yotam Ottolenghi’s hot charred cherry tomatoes with cold yogurt. The recipe had been popping up everywhere, from the LA Times and various newsletters and blogs to actual real humans recounting their new favorite recipe.

No? Well, it’s a recipe, I’ve learned, that’s been on the web since 2018, but only gained traction earlier this year thanks to a few TikTokers (is that what they’re called?) with large audiences. In short, you bake a block of feta cheese with cherry tomatoes and olive oil; then, when everything is all melty and blistered, you throw pasta into the pan and toss everything together.

I never got around to making the dish when it was traversing the web in January and February, and I still haven’t made it in its entirety — instead of tossing the baked cheese and tomatoes with pasta, I’ve been plopping the dish on the table and serving warm focaccia on the side.

It is, as you might imagine, incredibly delicious. Given its viral reception, this shouldn’t have been a surprise, but it was — I think I tend to approach viral recipes with skepticism because they feel more gimmicky than good.

But, Friends! This is really good. Maddeningly good! Have you made it? Did you know Finland nearly ran out of feta due to the recipe’s popularity? It’s true!

When I made the dish last Sunday, I served it aside chicken souvlaki, and while I usually can’t imagine serving chicken souvlaki without tzatziki, this dip subbed in just fine. I had a hard time not eating every bite of chicken with a spoonful of the feta dip and an even harder time refraining from just. one. more. piece. of. tomato-feta-sopped bread.

Friends, I almost didn’t post this recipe because, well, I sort of feel like it’s very old news at this point. But I’m taking the risk and hoping the viral TikTok recipe maybe escaped your radar or maybe didn’t move you to make it when you learned about it.

If you are still getting good cherry tomatoes — we are up here — let this be the last tomato recipe you make this season. You won’t be disappointed.

How To Make Baked Feta with Cherry Tomatoes:

Gather your ingredients: cherry tomatoes, feta, and, if you wish, garlic, shallots, and chilies.

Pour 2 tablespoons olive oil into a baking dish. Top with the tomatoes, shallots, garlic, and a pinch of salt and pepper. Toss to coat.

Add the feta. Drizzle 2 more tablespoons of olive oil over top, and crack more pepper to taste over top as well.

… then transfer to the broil for 5 minutes.

Add a handful of basil:

This is heaven, truly.

Incidentally, I’ve been making this focaccia a lot because it’s so darn simple. With this latest batch, I mixed the dough, stuck it in the fridge, then proceeded with the recipe 3 days later! I was worried the dough might have over-fermented, but it didn’t. Look how happy she looks:

Finally, local friends, this Maplebrook Farm feta is so good. They sell it at the Niskayuna Co-op and other local markets.

Here’s another fun thing you can do with the baked feta and tomatoes: toss it with baked spaghetti squash:

She’s not the prettiest, but she sure is tasty.