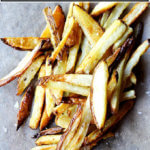 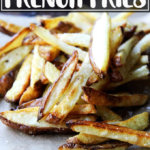 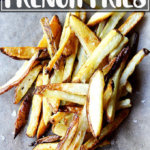 These homemade french fries emerge from the oven with exceptionally crisp edges thanks to a simple trick: soaking the cut potatoes in hot water for 10 minutes before baking.

Every summer, when the potatoes start arriving in our CSA, I am blown away by their flavor, by how they need nothing more than olive oil and salt, by how many potatoes we consume as a family each week. When I was at the farmers market last week, I asked the woman at the Barber’s Farm table why the summer potatoes were so good. She responded: “Because they’re fresh!”

I mean, if most — all? — vegetables taste their best at their peak season, why shouldn’t potatoes, too? They should, and they do, but I think that because potatoes have the added virtue of storing well, which allows us to enjoy them well past their harvest, we often associate them with winter cooking.

And with many a gratin and mash on the horizon, it’s certainly easy to overlook potatoes this time of year. But thinly sliced or julienned, coated in olive oil, showered with salt, roasted until crisp, summer potatoes couldn’t be more irresistible. Or could they?

After weeks of making completely delicious, no-fuss, oven “chips” and “fries,” I decided to explore the matter further. Could the fries be crispier? Better? After finding little guidance in a few of my favorite vegetable-focused cookbooks, I turned once again to the ever-reliable America’s Test Kitchen Family Cookbook, a book that has been open on my counter for weeks. And, of course, they had a trick. And fortunately, the trick was simple.

How to Make Crispy French Fries at Home

The ATK method calls for soaking the cut potatoes in hot water for 10 minutes before baking them. When developing the recipe, the Test Kitchen sought inspiration from the technique used when making traditional French fries, which is a brief blanching in hot oil or water before the final fry.

This blanching step “not only disrupts the starch molecules inside the potato (encouraging a fluffy interior), but also washes away some of the starch on the outside of the potato (preventing a leathery exterior).”

Here’s the method, in sum:

When I made the potatoes this way for the first time, everyone around the table agreed that these were especially good, especially crispy on the edges, especially creamy on the inside. I haven’t looked back since.

Update: I now cut them a bit smaller: more like 1/4 inch thick:

A note on potatoes: Russets are most often cited as the best frying potato. Unlike many potatoes, Russets will release their starch (which is what causes potatoes to absorb oil) upon being soaked or rinsed. I’ve had success with Russets but also with a handful of others from our CSA and the farmers’ market, including Salem, Red Chieftain, and Kuka Gold.