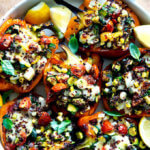 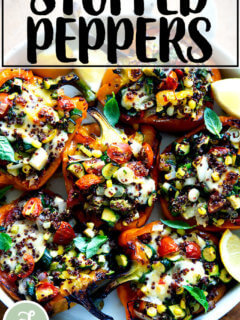 This is my go-to summer vegetarian entrée. These roasted stuffed peppers are loaded with sautéed vegetables and herbs: onions, corn, zucchini, tomatoes, scallions, and cilantro. Quinoa and Monterey Jack cheese give them a hardiness. Super summery and delicious, these peppers are loved by meat-eaters and vegetarians alike!

How to feed vegetables to a crowd?

This is a question I’ve found myself asking often in recent weeks. I’ve been on the road, first in Lake George, then in Connecticut, each for a week-long trip with extended family.

When it has been my turn to make dinner, I’ve found myself wanting to make something vegetarian — like a big, chopped salad with chickpeas and cubed cheese — but worrying about two things:

This time of year, when the produce is nearing its peak, it’s easy to throw together a big green salad or to steam a dozen ears of corn or to chop up a bunch of tomatoes and call the side dish done.

But how to make something vegetable-based for the main course when eight adults and eight children are sitting around the table? And how do you do this without spending three days chopping?

Here’s one answer: vegetarian stuffed peppers. I made these peppers three times this past week, and while I didn’t even attempt to serve them to the children, the adults raved.

These peppers are not something I would suggest you whip up on a weeknight, but they won’t keep you locked up in the kitchen chopping for days either.

How long to bake stuffed peppers?

How to Make Stuffed Bell Peppers:

Here’s the play-by-play: Gather your ingredients. Heat the oven to 475ºF convection roast.

Halve and core bell peppers, leaving their stems intact. Drizzle with olive oil and salt, place them cut-side down on a sheet pan, and transfer to the oven for 20 minutes.

Meanwhile, cook 1/2 cup quinoa in salted water for 9 to 12 minutes or until it is done; then sauté an onion with a hot chili until it is soft, about 5 minutes.

Add the diced zucchini, and sauté for a minute or two more.

Next add the corn and sauté for a minute more.

Add the tomatoes, scallions, and cilantro, and turn off the heat.

Next add the quinoa and stir to combine.

Add cubed Monterey Jack (or other cheese) and stir to combine.

Remove bell peppers from the oven.

Stuff the peppers with the quinoa-vegetable filling.

Transfer pan to the oven (or transfer a few of the peppers to a smaller roasting pan) and bake for another 10 minutes or until the cheese melts.

Garnish with fresh basil out of the oven and serve with lemon, if you wish.

Inspired by a recipe I made last fall for blistered poblano peppers stuffed with corn and quinoa from Leigh Belanger’s My Kitchen Chalkboard.

Scale this recipe up or down as needed. In the video, I make a half recipe, which yields 6 pepper halves.