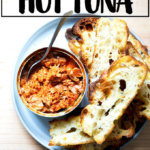 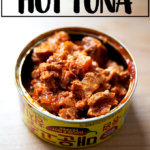 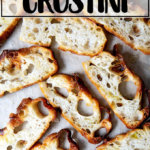 One evening last fall, Ben and I had dinner at Momofuku Ssäm Bar. Having read so much about the restaurant over the years, I had a few must-order dishes in mind, namely the fried Brussels sprouts and pork buns.

Blinded, perhaps, by my anticipation of these renowned dishes, I glazed straight over an appetizer called “Double Hot Tuna Can.” When our server arrived, my husband, a tuna lover, inquired, and shortly thereafter it, too, became a must order.

As someone who has never really loved tuna, I had zero expectations, but it ended up being one of my favorite dishes of the evening. The canned tuna, a slightly spicy Korean brand, gets “zhuzhed up” with Kewpie mayonnaise and sliced chilies. The mixture is then returned to its can and served with thin, toasty baguette slices.

It’s a very simple dish, but very flavorful, thanks to the tuna itself, which is canned in a tomato-based hot pepper sauce. Flecked with bits of potato and onion, the sauce has nice texture and flavor: not too spicy with a subtle sweetness. The tuna itself is less dry than most I’ve tasted, perhaps a result of marinating in the sauce.

When I returned home, I had to track down both the tuna and Kewpie mayonnaise. Kewpie, if you are unfamiliar, is a popular Japanese brand of mayonnaise. Its deliciousness can be attributed to a number of factors from the ingredients — prized Japanese egg yolks, rice vinegar as opposed to distilled vinegar, MSG — to the emulsification process itself. If you are curious, you can read more about it in this Thrillist article.

Kewpie mayonnaise is not hard to find. Here’s one source.

Double hot tuna, on the other hand, requires a little more effort, especially if you hate paying for shipping. I’ve ordered it from here: H&Y Market. And I can find it locally at Sunhee’s in Troy. Some Asian markets carry it, but not all.

Friends, I wish this tuna were easier to find, because a.) It’s especially nice to have on hand right now, and b.) It’s really yummy. If you like tuna and you like heat, you’ll love this. If I track down a better online source, I’ll be sure to be in touch.

Here’s the play-by-play: Gather your ingredients: a tin or two of Korean double hot tuna and mayonnaise, Kewpie if you feel like tracking it down.

Open the tin and mix it in a bowl with a squirt or two of mayonnaise. I haven’t been adding the sliced chilies, as they do at Momofuku, but feel free to do so if you like a little more heat — the tuna itself is not overwhelmingly spicy.

Return the mixture to its can (…if you feel like serving it Momofuku style).

Meanwhile, find some stale bread, and …

Transfer to a sheet pan. Drizzle with olive oil. Season with sea salt. Toast at 450ºF for 7-10 minutes.

Serve your tuna with crostini on the side.

Inspired by an appetizer served at Momofuku Ssäm Bar in NYC.

If you want to make this as they do at Momofuku, you’ll need: