Trying To Understand The Food Crisis and Artisan Bread In Five Minutes A Day: Corn Bread 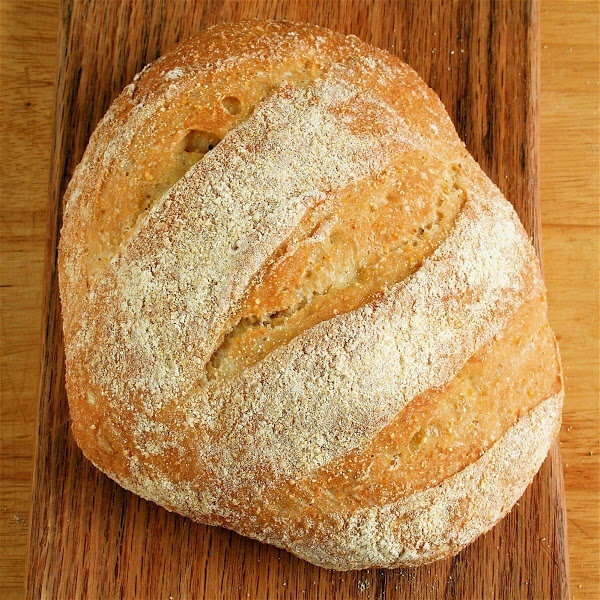 In a May 19th New Yorker article, Bee Wilson wrote: “As of 2006, there were 800 million people on the planet who were hungry, but they were outnumbered by the billion who were overweight. Our current food predicament resembles a scenario largely created by overproduction rather than underproduction. Our ability to produce vastly too many calories for our basic needs has skewed the concept of demand and generated a wildly dysfunctional market.”

This confused me. How could so many people in the world — 100 million people currently are at risk of joining the one billion people on the planet living on $1 a day — be hungry if there is no overall shortage of food? The answer, I learned, is complicated.

China, India, Europe and the United States are all to blame. Trade officials in these nations (and other wealthy nations), of course, design policies that will protect their farmers. What’s so bad about that? Well, when governments intervene in markets by imposing import tariffs and subsidies, for example, markets do not operate as they should and false equilibriums are reached. This, in turn, leads to market failures — such as food shortages — and the consequences can be dire: misery, malnutrition, starvation.

I’ve been trying to understand this food crisis for the past few months now, and I have summarized below what I have learned. Links to all of the articles I have read regarding this matter can be found at the end of the post (before the recipe.)

• Usually food crises are localized, but for the first time in 30 years, food protests are erupting in many places at once: 33 countries (including Haiti, Bangladesh, Cameroon, Egypt, the Philippines, El Salvador and Pakistan) are at risk of social upheaval because of the high food prices.

• Human suffering is vast. Food inflation could push 100 million people into poverty, wiping out all the gains the poorest billion have made during almost a decade of economic growth.

• The era of cheap food is over.

What is causing the high food prices?

1. The growing middle-class in China and India: A half-billion consumers in these countries are increasingly emulating rich Western diets. (They are eating more meat.)

2. High oil costs have sent diesel fuel, fertilizers and farm chemical prices sky-high. Industrial agriculture has become so dependent on fossil fuel — for fertilizer, for pesticide, for processing and transportation. Today it takes 10 calories of fossil-fuel energy to produce one calorie of food energy.

3. Western biofuel programs converting cereals into fuel. This year, one-fifth of the American corn crop will be devoted to Ethanol. High corn prices have led farmers to plant more corn and less soy and wheat, leading to the surge in the price for all grains.

4. Arable acreage is continually being cut back due to environmental regulations, water scarcities and urban development.

5. Government interference in markets. In a perfect world: the response to higher prices is higher output; with farming, however, this isn’t the case. For one, it always takes a season to grow more food (unlike a toy factory, which can respond immediately). And second, by imposing export quotas, price controls, consumer subsidies, export restrictions and lower tariffs, governments muffle signals to farmers and further delay their reaction to price signals. In a free market, imbalances get smoothed out naturally.

What is the solution?

First: Get food and help to the famine-ravaged places. In the short-term, humanitarian aid, social protection programs and and open trade policies will alleviate the suffering. To achieve this, the World Food Program (the world’s largest distributor of food aid) needs an extra $700 million. Though the importation of American and European surplus harvests could damage domestic markets in poor nations, given the widespread food shortages, this is the short-term solution.

Second: Open up trade. Governments need to liberalize markets not intervene. Victor Davis Hanson writes: “The best thing  that the United States could now do is to stop interfering with its own farmers, let markets and need determine what they grow and how they farm — and then by such a principled American example, persuade the rest of the world to do the same.”

• Reduce modern agriculture’s dependence on oil. Michael Pollan writes that “agriculture is the original solar technology, and sustainable farmers have shown us how we might put our food system back on a foundation of sunlight. For example, when you take cattle off their typical feedlot diet of grain and allow them to eat grass, those hamburgers put less pressure on the prices of both oil and grain.”

• Pollan continues: “Most of the world’s grain goes to feed animals, not people, and meat is a very inefficient use for that grain — it takes 10 pounds of grain to make one pound of beef. There would be plenty of grain for everyone if we actually ate it as food and didn’t use it to make meat. Reducing world meat consumption — or feeding our food animals differently — would leave more grain for the world’s hungry.

• The Economist asserts that the way to feed the world is not to bring more land under cultivation, but to increase yields, and science, thus, is crucial. (The Economist: The quickest way to increase your crop is to plant more, but in the short run, there is only a limited amount of fallow land. Food increases thus need to come from higher yields.)

Oh and P.S.: This bread, like all of the other loaves produced from recipes printed in Artisan Bread in Five Minutes A Day, is delicious. As the pictures show, this isn’t the typical, sweet, cake-like creation most often associated with the word “cornbread.”

16 Comments on “Trying To Understand The Food Crisis and Artisan Bread In Five Minutes A Day: Corn Bread”