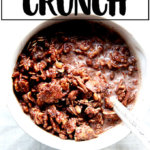 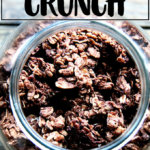 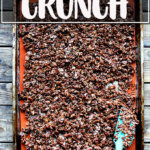 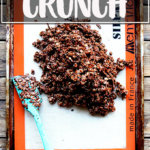 This delicious homemade cocoa crunch is my children’s favorite! In essence, it’s chocolate granola, a mixture of oats, crispy rice cereal, coconut, cocoa, and chocolate. It’s nut-free and gluten-free, which makes it great for sharing and gifting. Adults and children alike adore this one!

The origin of cocoa crunch — not Koko Krunch — dates back to the onset of the organic movement and a UK company called Whole Earth Foods, who extolled the importance of planet-friendly fare 40 years before it became a trend, and who created this breakfast cereal to appeal to adults and children alike.

In essence it’s chocolate granola made without nuts, a mixture of oats, crispy rice cereal, coconut, cocoa, and chocolate, which bake into clusters fit for snacking on their own or drowning in milk, which ultimately turns into chocolate milk, a boon for little ones especially.

The original recipe, from Green and Black’s Chocolate Recipes, calls for making a thick sugar syrup, which I have replaced with maple syrup. Eliminating the syrup-making step simplifies the process and the maple flavor does not dominate the chocolate.

Like the coconut oil granola, this cocoa crunch makes a great gift, but is also a treat to have on hand: my children and many of the neighborhood kiddies have been gobbling it up after school, but on more than one occasion, too, I have spotted in my kitchen an adult, head thrown back, bowl covering face, finishing off a late-night snack.

Source: Inspired by the cocoa crunch recipe in Green and Black’s Chocolate Recipes

Rice cereal: I don’t love buying products like crispy rice cereal for recipes, but it’s sort of essential in this one. Here I’ve used Erewhon Crispy Brown Rice, which has only three ingredients — Michael Pollan approved! — though the original Rice Krispy cereal would work just fine, and in fairness to RK, its ingredient list isn’t horrid.

Cocoa and chocolate: I’ve been using Hershey’s unsweetened cocoa and Ghirardelli 60% cacao bittersweet chocolate. After you make this once, you may want to alter the amount/type of chocolate.

Silpat: My parchment paper use had gotten a little out of control, so I recently bought a Silpat, which I have owned and loved before, and which I am loving having on hand again.

To stir or not? The key to getting nice chunks of cocoa crunch is to not stir the mixture at all while it bakes. Once it cools completely, it will break into nice shards, which can be broken up further. That said, big shards can be hard to eat. So as you break this up before transferring it to a storage vessel, you may want to break it into bite-sized chunks.