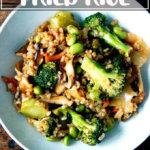 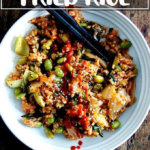 This vegan kimchi fried rice, which calls for an entire 16-oz jar of kimchi, comes together in a snap and is so flavorful. I love the combination of bok choy and mushrooms, but the recipe is adaptable to any number of vegetables. Be sure to have your ingredients prepped and measure, because once the first vegetables hit the pan, the process moves incredibly quickly. So easy and good!

A little over two years ago, I bought my first vegan cookbook, Food52 Vegan, by Gena Hamshaw. Prior to opening it, I had dismissed a vegan diet as impossible given that I started every day with a bowl of muesli soaked in cow’s milk.

The book’s arrival, however, coincided with an evening of watching Cowspiracy, a movie that concludes — spoiler alert — that a vegan diet is the only globally sustainable diet. Feeling inspired to make some changes, I made Gena’s cashew milk, which turns out to be creamy and delicious, and which sent me on a many-months’-long-homemade-cashew-milk bender.

The bender has since ended. The nut milk obsession has not. I now soak my morning muesli with store-bought almond milk.

Friends, as you know, I am not vegan. I am, however, constantly inspired by vegan recipes, Gena’s in particular. From the recipes she posts weekly on her blog, The Full Helping, to the recipes from Food52 Vegan, including freekeh salad with roasted cabbage and kale, homemade cashew milk, cashew milk chia puddings, and roasted ratatouille pasta, which became a weekly favorite late last summer and fall, the food Gena makes is incredibly delicious and satisfying—nothing about it leaves me wanting.

Gena’s kimchi fried rice from her latest book, Power Plates, is no exception. Thanks to my recent Instant Pot brown rice discovery, which has left me with a reliable stash of rice in the fridge, I have made this so many times now, and what I love about the recipe is its adaptability.

The original recipe calls for bok choy, which I love, but I’ve loved it with broccoli and shiitake mushrooms, too, and I imagine so many vegetables could work.

Also, because I am without a proper kitchen and am constantly taking shortcuts, I’ve discovered I can throw the frozen edamame right into the mix without thawing or blanching it—it works like a charm.

My favorite part about the recipe? It calls for an entire jar (16 oz) of kimchi.

With cooked rice on hand, this recipe is especially weeknight friendly — see step-by-step process below — and because it comes together so quickly, it’s important to have all your ingredients prepped before cooking.

More to the point, this one-pan wonder is macro-nutrient balanced. Um, excuse me?

Gena notes in Power Plates that “what makes a meal balanced isn’t always clear. Our culture is flooded with conflicting philosophies regarding nutrition and strident opinions about what is and isn’t healthy.”

Through her work as a nutritionist and through personal experience, Gena has found that one way to think about balance is to place an emphasis on all three macronutrients within each meal.

Eating meals that include quality protein, fat and carbs, as well as a ton of fresh produce, can lead to increased satiety and energy and, in turn, prevent cravings and midday hunger.

Each of the recipes in Power Plates is designed around this philosophy. That said, it’s not a diet book. Gena set out to write Power Plates with the goal of offering 100 practical, flavor-packed, balanced vegan meals.

There are no snacks, no desserts, no appetizers — every recipe, whether it’s a breakfast, a salad, a soup, or other, is a balanced meal, which are the sorts of recipes these days I look for more and more.

In addition to the kimchi fried rice, I have made the cauliflower-chickpea scramble, which is seasoned with turmeric and smoked paprika and is loaded with kale—it is incredibly delicious (photo below), and I have so many other recipes bookmarked.

As always, I’ll keep you posted. Read more about Power Plates on Gena’s blog and find a recipe for Harvest Bowls with Spelt Berries, Tempeh, and Roasted Root Vegetables. 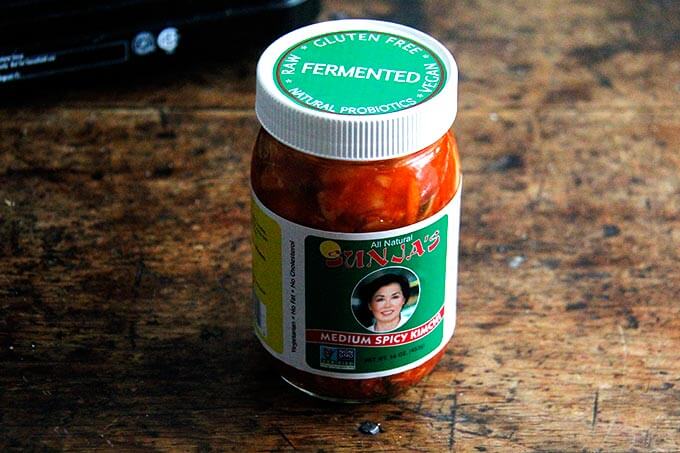 Here’s how to make this kimchi fried rice: Drain the kimchi: 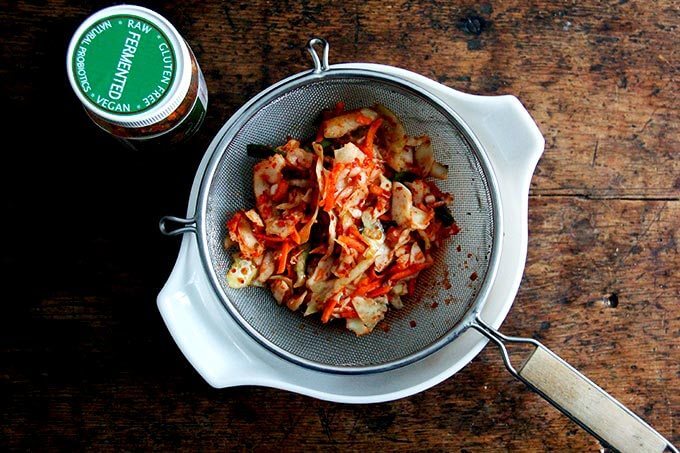 Here I’ve used brown rice, broccoli, and shiitake mushrooms, but I really love it with …: 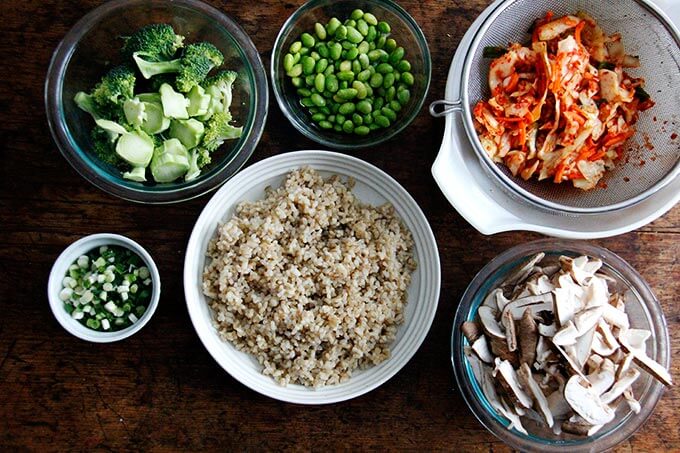 white rice and bok choy, too: 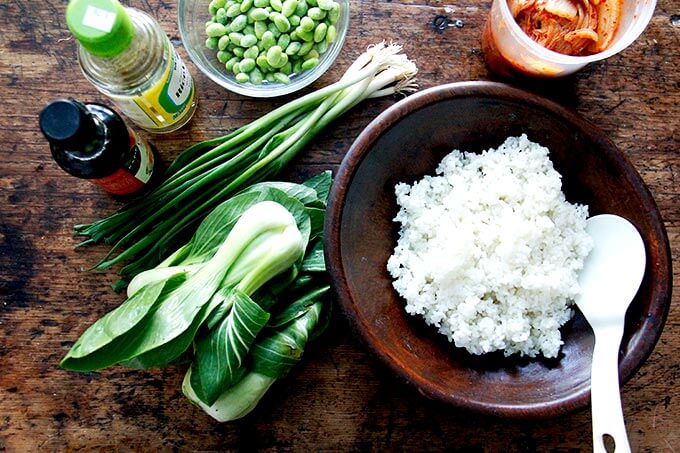 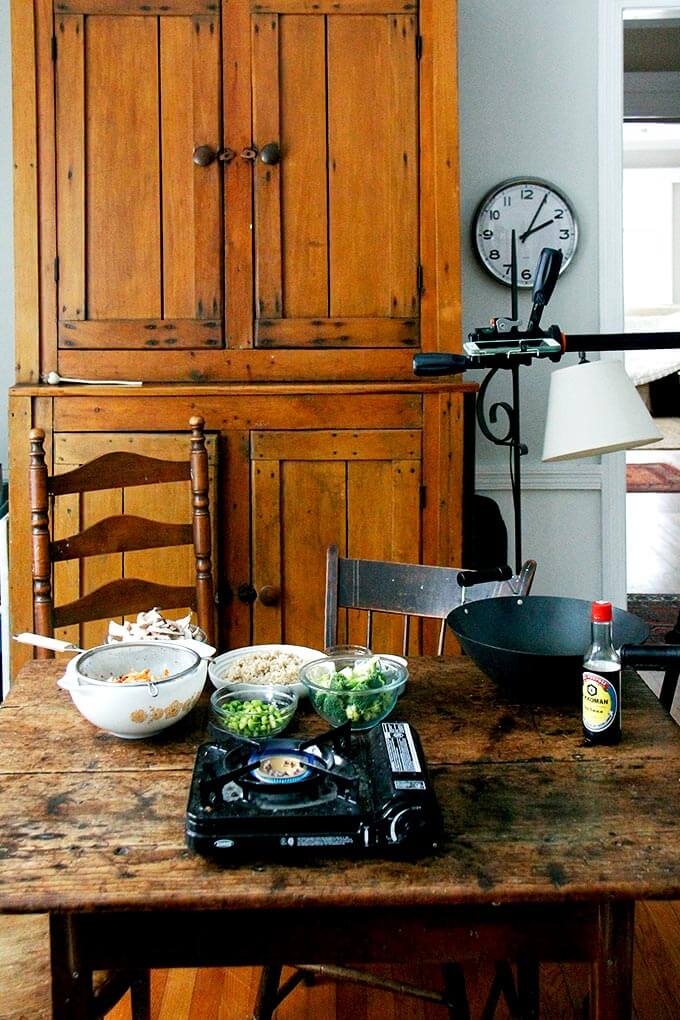 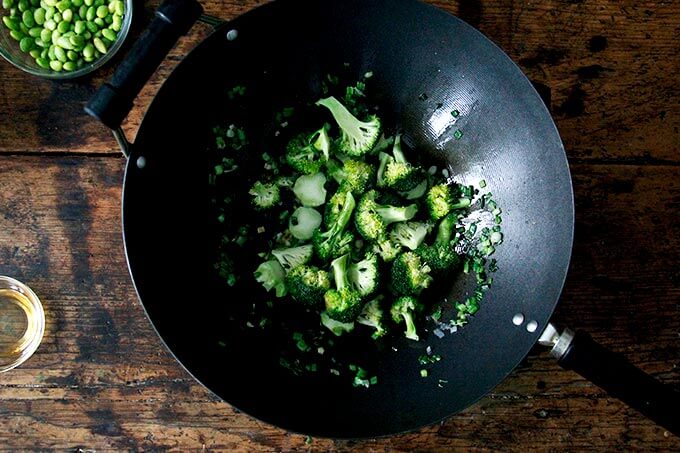 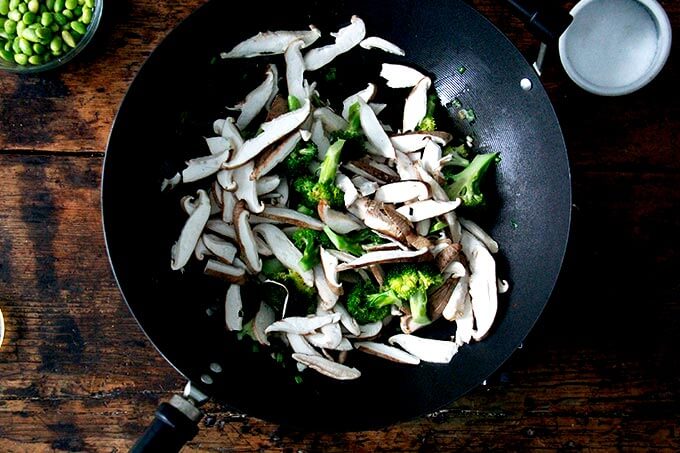 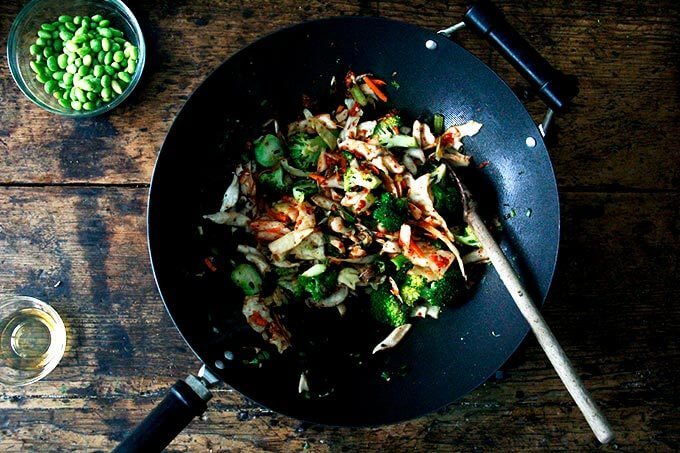 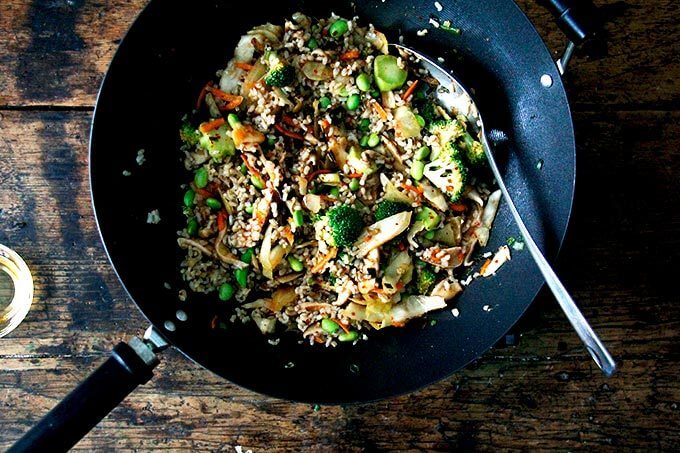 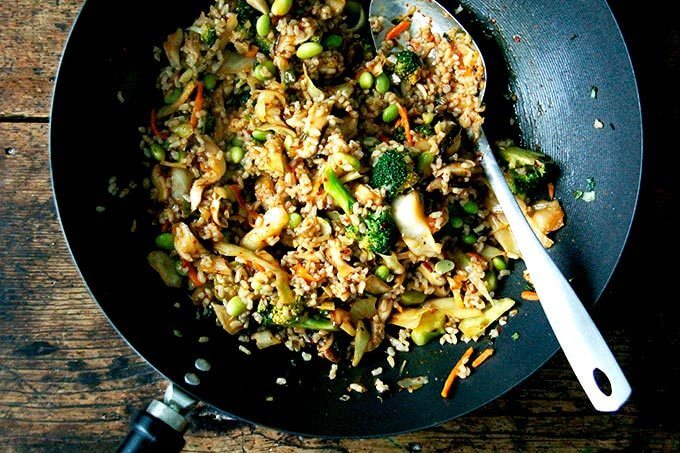 This is the chickpea-cauliflower scramble, which is so, so good: 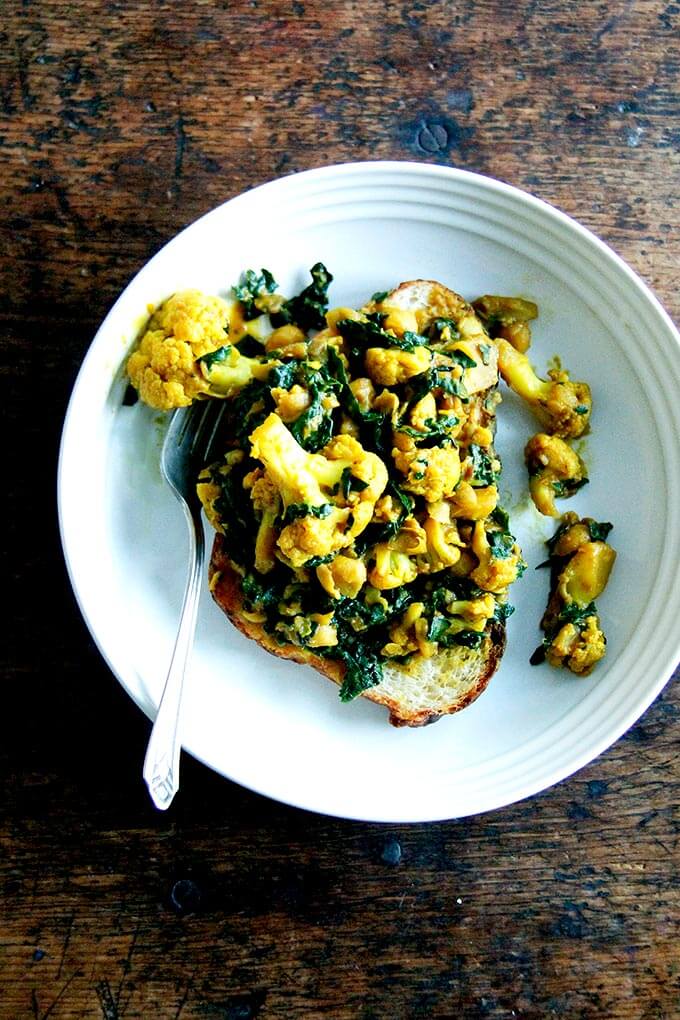 I used Sunja’s Kimchi, the medium-spicy jar, which I found at Honest Weight Food Co-op. I really love this kimchi. It’s already chopped into small-ish pieces, which is nice for this recipe because otherwise you have to chop it, and in addition to the cabbage there are lots of other vegetables: carrots, sweet red pepper, leek, and scallion, garlic, and ginger, all of which add to the flavor.

To simplify things, because I still do not have a kitchen, I don’t thaw or blanch the edamame — I just add them frozen directly to the wok…it works just fine. Give it a go!

Veg: My favorite combo is bok choy and shiitake mushrooms, but use what you like.