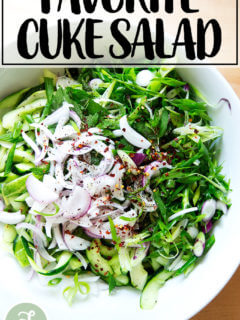 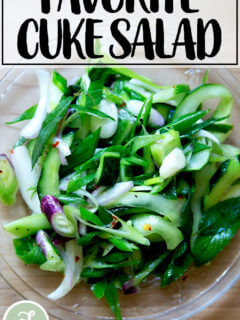 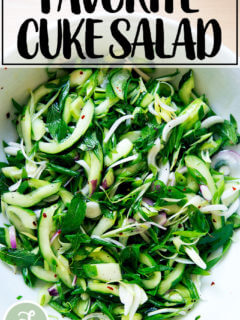 Made with crunchy zebra-striped peeled cucumbers, sweet red onions, and a white balsamic vinaigrette, this salad is light, bright, and perfect for warm summer days. It is my go-to cucumber salad, and once you try it, you’ll understand why.

If you don’t have a go-to cucumber salad in your repertoire — or even if you do — you must give this recipe a try. It comes from Joshua McFadden’s Six Seasons, one of my favorites, and with one bite, you’ll understand why: it’s crisp and cool, loaded with herbs, perfectly spicy with a nice acidic bite. It’s truly one of the best summer salad recipes I make.

Overall it’s a simple salad, but the key to success with this salad is following the method, which most critically calls for salting the cucumbers and letting them drain for 30 minutes before dressing.

This, I would argue, is the difference between making a good and a great cucumber salad, regardless of the seasonings you are using. As Alice Waters notes in Chez Panisse Vegetables:

“Cucumbers dressed in advance or used in a sauce may give up too much water and dilute the flavor of the dish. To avoid this, lightly salt the prepared cucumbers, let them sit in a strainer for 10 minutes, wrap them in a clean kitchen towel, and wring out the excess moisture.”

This salting step draws out the moisture of the cucumbers, priming them to receive the dressing, which in this case is a simple mix of white balsamic vinegar and olive oil.

In addition to salting the cucumbers, there’s one more step I encourage you not to skip, as I was inclined to: soaking the sliced scallions in ice water for 20 minutes. This step not only tempers their bite, but also makes them especially crisp.

I never mind the bite of a raw scallion, so the compelling reason for me to take this extra measure is for the crispness, or rather, the enduring crispness: scallions tend to get a little tired once dressed, but the ice water bath helps them retain their crispness, which is perhaps why this salad tastes so incredibly refreshing.

Here’s the play-by-play: Gather cucumbers, scallions, and a red onion.

Peel the cucumbers zebra-style (for visual appeal), and scoop out the seeds.

Slice the cucumbers up into various shapes and sizes, again for visual appeal, if you wish.

Place them in a colander, sprinkle them with salt, and let stand 30 minutes.

Meanwhile, slice up some scallions.

Soak them in ice water for 20 minutes.

Slice up some red onion.

Toss everything together with crushed red pepper flakes, fresh cracked pepper, and white balsamic vinegar (or other). Taste. Add salt to taste; then add olive oil.

So fresh. So good:

Made with crunchy, zebra-striped peeled cucumbers, sweet red onions and a white balsamic vinaigrette, this salad is light and bright, and perfect for warm summer days. It is my go-to cucumber salad, and once you try it you will understand why!