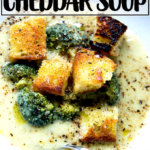 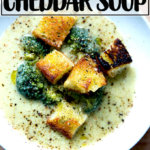 Broccoli-Cheddar soup is something I always want to make but never do. With heaps of cheese, half and half, butter, and sometimes bacon, recipes, at a glance, often more resemble Super Bowl queso than soup.

So when I saw this recipe on Bon Appetit, I was intrigued. For one, it calls for water, as opposed to stock or milk. How nice? Two, it’s thickened by both puréed broccoli stalks and potato, as opposed to a roux. Love it. Three, it’s finished with a small amount of Greek yogurt. Interesting, right?

It’s relaxed, too, a period of time during which you can both prep and clean in between steps. When the soup is ready to serve, your kitchen will be neat as a pin. You may even find time to toast up some cubes of day-old bread with olive oil and sea salt, something I highly recommend you do.

Can you tell how much I love this recipe? The soup tastes like — wait for it — vegetables! But it’s not so austere: there’s a richness and a heartiness to it thanks to a good amount of Cheddar cheese as well as the puréed potato-broccoli base. It has some nice heat, too, thanks to crushed red pepper flakes and as much freshly cracked black pepper as you wish.

This soup may have you heading back to the pot for thirds and fourths, which may leave you wondering if one bowl of queso might have been better? No chance.

PPS: ALL the Soups.

As with so many soups, this one tastes better by the day, so don’t be afraid to make it ahead of time.

The original recipe calls for making cheesy toasts, which you cut up and add to the soup, which look and sound delicious. For simplicity, I’ve stuck with my favorite soup topper: cubes of olive oil-toasted, day-old bread. They are irresistible on their own, but especially good in soup. I also find I can keep my children more interested in their soup with a bowl of these croutons on the table.

With that in mind, if you are making this for children, omit the crushed red pepper flakes or cut it back to 1/4 teaspoon.