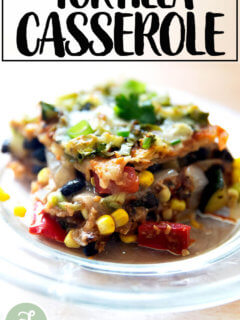 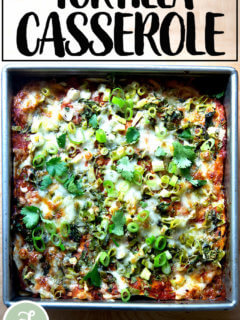 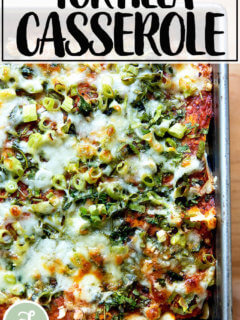 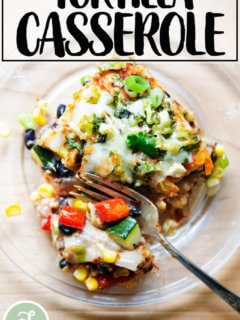 This tortilla casserole is packed with veggies — onions, red pepper, corn, and zucchini — beans, herbs, and cheese, all combining to make a super flavorful vegetarian dinner. Homemade enchilada sauce is optional…but: it takes 15 minutes to make, and it is so, so tasty.

Of all the culinary discoveries this year, this quick, red enchilada sauce has been the most welcomed. It’s a variation of the sauce made from canned tomatoes used in this Easy chicken enchilada casserole recipe, which is another favorite.

If you haven’t yet given it a go, I highly recommend you do: start to finish it takes 15 minutes, and it yields enough for at least a couple of batches of enchiladas or huevos rancheros or this lasagna-style casserole, which has found purpose for the many tortillas amassing in my bread box as well as a glut of produce in my vegetable bins.

With that in mind, this is the sort of recipe that lends itself well to improvisation. Here, I’ve sautéed zucchini, corn, and bell peppers, but I can just as soon imagine sautéing mushrooms or Swiss Chard or roasting cubed butternut squash or shredded Brussels sprouts.

The key to an especially delicious tortilla casserole? The sauce. As a refresher, it’s made with broiled vegetables (tomatoes, onions, and jalapeño), fresh lime juice, and a chipotle in adobo sauce. It infuses anything it smothers with heat and spice, smoke and char, sweetness and acidity. It is delicious.

Here are the other components:

There are instructions in the notes below the recipe for how to freeze this tortilla casserole… your December self will thank you. As always, I hope you all love this one as much as I.

Here’s the play-by-play: Gather your ingredients.

Sauté the vegetables, starting with the onions and peppers, then the zucchini, and finally the fresh corn.

Add some black beans, stir to combine, and season to taste with salt.

Top the last layer of tortillas with sauce, herbs, and finally cheese.

The beauty of this recipe is that you can use whatever shaped pan you have. Here’s a smaller 9-inch square pan ready for the oven:

The casserole bakes at 425ºF for about 25 minutes or until the cheese begins to brown.

You can garnish with more fresh herbs if you wish.

Let rest at least 10 minutes before cutting and serving. It’s so, so good.

This tortilla casserole is packed with sautéed veggies — onions, red pepper, corn, and zucchini — beans, herbs, and Monterey Jack cheese, all combining to make a super flavorful vegetarian dinner. Homemade enchilada sauce is optional…but: it takes 15 minutes to make, and it is so, so tasty.

This is an assembly that lends itself well to improvisation — use what you have on hand: mushrooms, Swiss chard, kale, eggplant would all work well here.