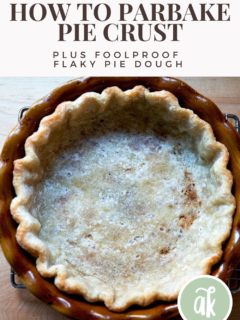 About this time of year last year, Erin McDowell’s The Book on Pie made its way into the world. It is a stunning book, overwhelming in its breadth and beauty, a tome filled with recipes and techniques for making any pie your heart desires, a comprehensive guide promising to answer any pie question to have ever crossed your mind.

For me, the big question was: Is parbaking pie crust necessary?

To prevent a soggy bottom, parbaking is a step required of many a Thanksgiving pie, and it’s a step I dislike for several reasons, including:

My lack of parbaking success over the years has led me to skip the step altogether — to be honest, no one seemed to notice. It also pushed me squarely onto team galette.

But last year, reading through Erin’s book, I realized I was doing it wrong: I have been severely overbaking my parbaked pie crusts. On page 46 of the book, a photo depicting a correctly baked, underbaked, and overbaked parbaked pie crust showed me my error: the bottom of a correctly baked parbaked crust should be barely toasted, mostly blonde with the faintest hint of brown; the edges should be lightly golden.

Erin’s method calls for baking the pies with weights (or dried beans) for 15-17 minutes and for just 2 to 3 minutes more without the weights. I had never seen such a short time frame for parbaking, but I tested the method on my favorite Thanksgiving pie, Ronnie Hollingsworth’s most excellent squash pie, and the method worked beautifully! Do you see how nicely golden but not overly so the crust looks?:

Friends, I am so excited to have this piece of the pie (ha!) resolved. But this is not all I’ve learned. Let me share a few more findings.

The Importance of Chilling Your Pie Dough

After you make your pie dough, you should let it rest in the fridge for at least 30 minutes or better, one hour, before you roll it out. Why? For two reasons:

Why You Shouldn’t Freeze Your (Rolled-Out) Pie Dough

Although pie dough freezes beautifully in portioned discs, once you roll it out and fit it into your pie plate, you shouldn’t freeze it. This is because:

“Freezing can mess with the way fat acts in the oven. While you do want dough to be cold, if it is baked from frozen, it may take a while for the butter to soften and thus delay the flaky puff-up effect that occurs when the dough hits the oven heat. This can lead to the butter melting out of the crust, making a greasy and/or smoky mess in your oven and a tough crust.”

I tested this theory by baking one shell immediately after rolling it out and one I had frozen for 24 hours. I had suspected that the frozen one would hold its shape better, but I was wrong! It actually shrunk more, and, as Erin noted, made a smoky mess in the process because the butter melted out of the crust.

Friends, there are a few photos below, but I think the video will be most helpful here. It starts with my favorite foolproof food processor pie dough recipe, which employs a tea towel trick I learned from a French woman years ago, and ends with a parbaked shell.

As noted in my Thanksgiving Menu 2022 post, this year I’ll plan on making my pie dough the Tuesday before Thanksgiving, rolling it out and parbaking the shells on Wednesday, and filling and baking the pies first thing Thursday morning.

I cannot wait. I truly love nothing more than waking at the crack of dawn on Thanksgiving morning, tying my apron, brewing the coffee, and tackling all of the day’s to-dos. Hope you do, too. If you have any parbaking wisdom to share, please do.

Above: This pie shell is about to enter the oven. Note: You can save those dried beans and use them again and again: let them cool; then stash them in a Ziplock bag.

Below: This is a just-baked parbaked pie crust.

This is Ronnie Hollingsworth’s Most Excellent Squash Pie, which I made with a can of pumpkin purée in place of the roasted squash for this recent experiment. It was good, but I missed the squash.

Can you see how flaky the crust is?

This is the pie dough recipe I use for every tart, pie, galette I make. In this recipe and video, I show how to make the pie dough as well as how to parbake and blind bake it. Parbaking is a step that ensures the bottom crust of your pie will not be soggy. Here are a few recipes that benefit from a parbaked crust:

For baking and storing: