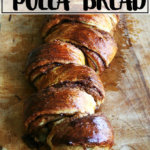 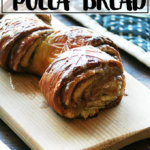 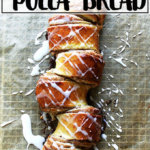 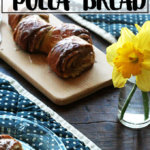 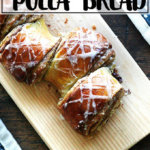 A few weeks ago while searching for recipes online by Bea Ojakangas, the Scandinavian chef to whom Nigella Lawson credits the processor Danish pastry dough recipe, I stumbled upon a most delectable looking cinnamon pull-apart bread. Its creators, Lindsay and Bjork, had taken a class with Bea and learned how to make this “pulla,” which they described as “everything you love about cinnamon rolls in a pull-apart bread form.”

With that in mind, last Saturday, I made a batch of my favorite cinnamon roll dough, shaped it into a log as described above, and baked it for a few friends passing through town en route to an Easter gathering. The loaf of pulla stretched from corner to corner of the sheet pan, oozed with cinnamon and sugar upon baking, and required my largest cutting board for serving.

When our friends arrived, we tucked in immediately, each pulling at the nearest coil, spreading cream cheese icing over each bite, eating and talking and sipping coffee until not a crumb remained — it couldn’t have been more festive or fun.

As you can see it stretches from end to end of a large cutting board. This is kind of fun — very dramatic! — for a large gathering, but for a daintier presentation, cut the dough in half and bake two smaller loaves: