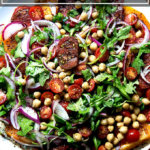 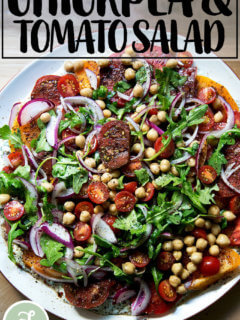 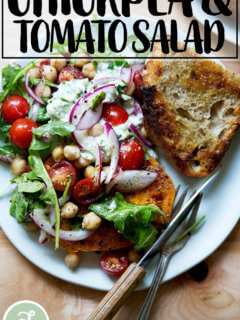 I grew up eating meat with tzatziki, a garlicky, lemony-yogurt sauce. Most often it was aside this chicken souvlaki, a favorite summer meal, but in addition to mint sauce, it often was on the table with lamb, too.

In recent years, I’ve learned I love yogurt sauce just as much with vegetables — I love how its tang so nicely complements the earthiness of roasted squash, cauliflower, eggplant and others. I love how it turns vegetable side dishes into more substantial entities, meals in their own right. I love how it assumes the flavor and seasonings of whatever vegetables it finds itself with, thinning as it absorbs the excess liquid, ultimately becoming the perfect consistency to mop up with slices of crusty bread.

I find I miss it now when it’s not there.

Over the weekend I opened a favorite cookbook,  Six Seasons, turned to the “late summer” chapter, and found this recipe: Israeli-spiced tomato and chickpea salad with — wait for it — yogurt sauce!

I made it, loved it, and am here to tell you why you should make it immediately.

First: Summer isn’t over. The start of the school year might have us feeling otherwise, but we still have 13 more days, and, more important, we have so many months of roots and gourds ahead of us. Let’s try to savor every last beefy tomato we can get our hands on. My garden has nearly stopped producing, but the farmers’ market, my CSA, friends’ gardens, and our local grocery stores are still delivering. I hope yours are, too.

Second: Yogurt Sauce. If you haven’t paired it with vegetables, raw or cook, you’re in for a treat. Moreover: cucumber-yogurt sauce! The cucumbers are still abounding, and if you find yourself overwhelmed, grate one or two, stir it into some Greek yogurt, season it with salt, lemon, and any other seasonings or herbs you wish.

Third: Nacho-style assembly: More and more, I love a layered salad — I love how, once served, the layers mingle and jumble, and the bites in which all the elements collide are spectacular, though as a whole it never tastes like a tossed salad, unified by a single dressing. I can’t say enough good things about this Israeli-spiced layered salad, but feel free to make it your own. Here’s a rough guide:

The first layer, a yogurt sauce smear, can be as simple as yogurt + lemon + salt. You can add garlic for a little zing or herbs such as mint or chives or parsley for a little more flavor. You could drizzle the yogurt smear with olive oil + za’atar, as here; you could add toasted, ground spices, such as cumin, as here; or you could grate in cucumber as in the tomato salad featured here. As long as the yogurt is seasoned well with salt and lemon, you can’t go wrong.

Note: If you are looking for that creamy, tangy element but are avoiding dairy, you could replace it with a tahini sauce.

The vegetables can vary from roasted cauliflower, eggplant, and delicata squash to raw tomatoes, shaved zucchini, and grated beets or carrots — truly whatever you like. Whether the vegetables are raw or cooked, they should be seasoned well with salt, any spices you wish, and, at times, with olive oil and maybe some sort of acid, too.

Layer 3: Something Sharp: Salsa, Sauce, or (Another) Salad

This final layer can be as simple as a squeeze of lemon with a sprinkling of za’atar or a drizzle of olive oil. It can be a spiced, herby sauce, such as skhug (my favorite!). It can be textured and bright, such as this walnut-caper salsa, for these cauliflower steaks. It can be a light tomato-and-arugula salad, as here, or a more substantial chickpea-and-red onion salad as featured in this tomato salad.

Whatever you use, be sure it is on the sharp side — go big with the lemon, lime, or vinegar. Like a salsa for nachos, it should have a nice acidic bite.

Here’s the play-by-play: Grate 1 or 2 cucumbers: 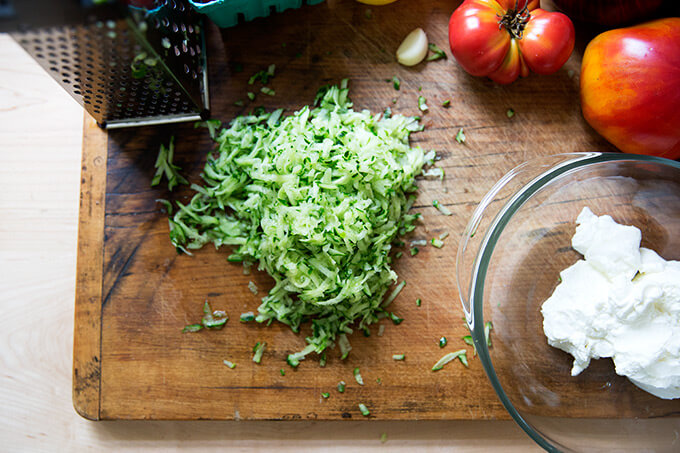 Add them to a bowl of yogurt with garlic, lemon juice, and salt. 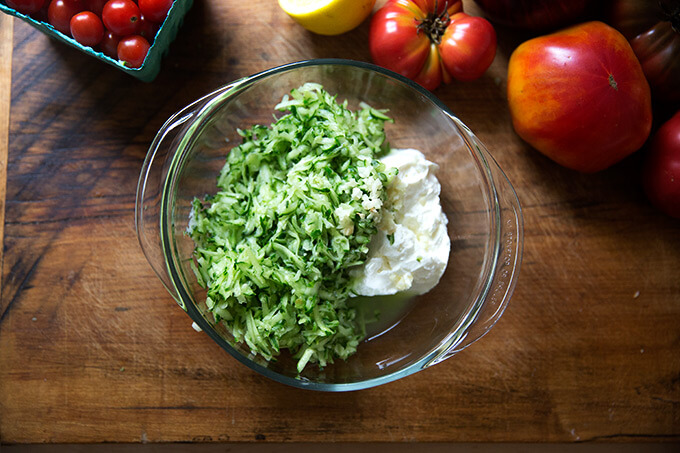 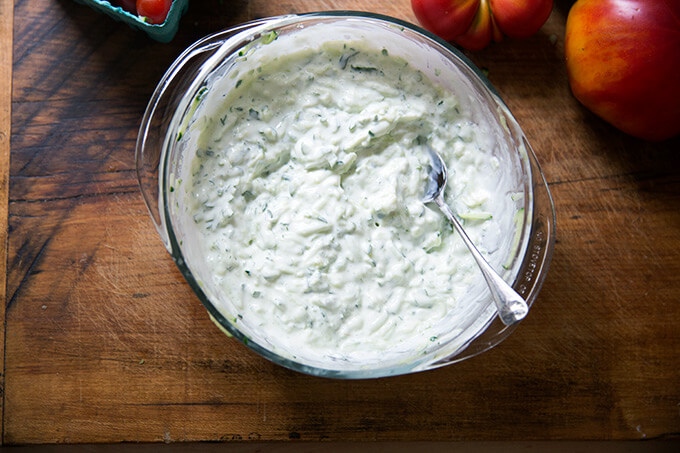 Smear this yogurt sauce on a large platter. 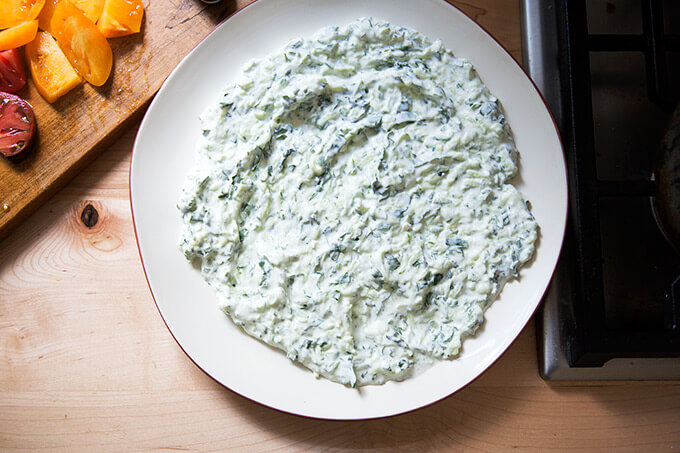 Slice up some tomatoes. 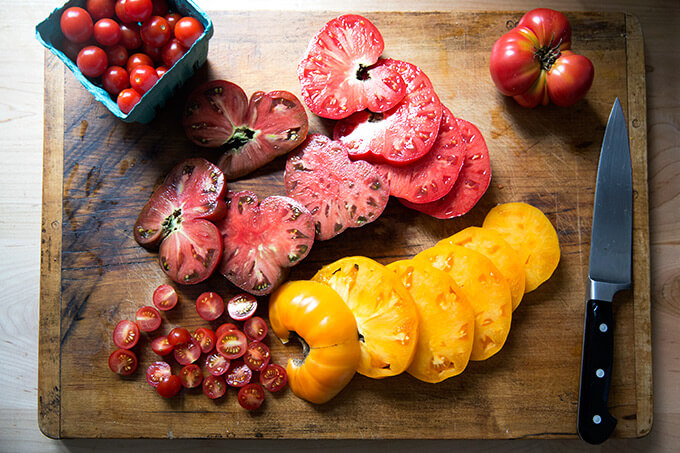 Arrange them on top of the cucumber-yogurt sauce. 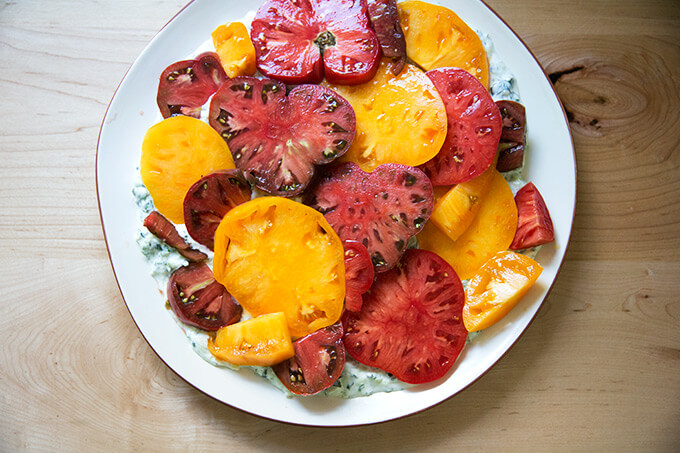 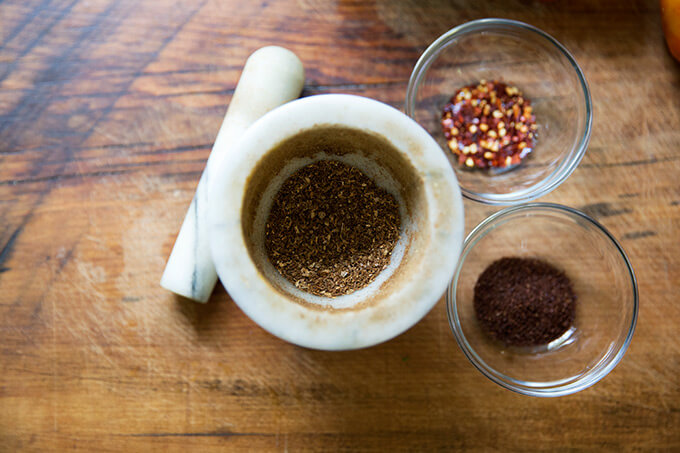 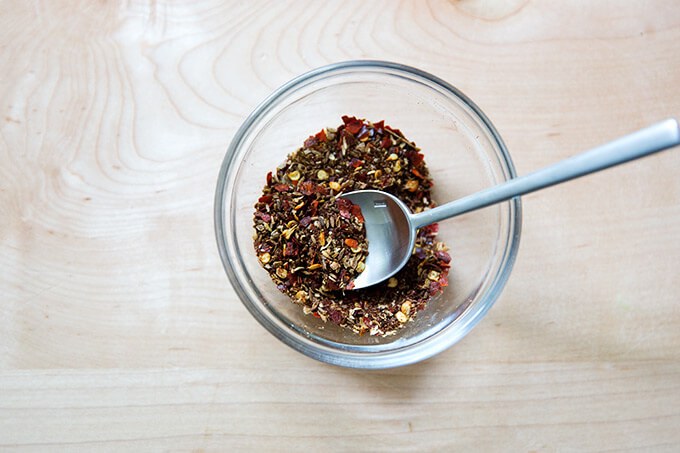 Season the tomatoes with the spice mixture as well as with salt and freshly cracked black pepper. 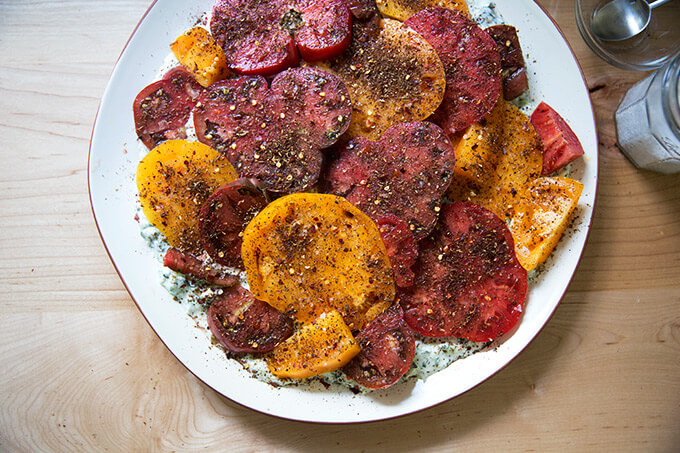 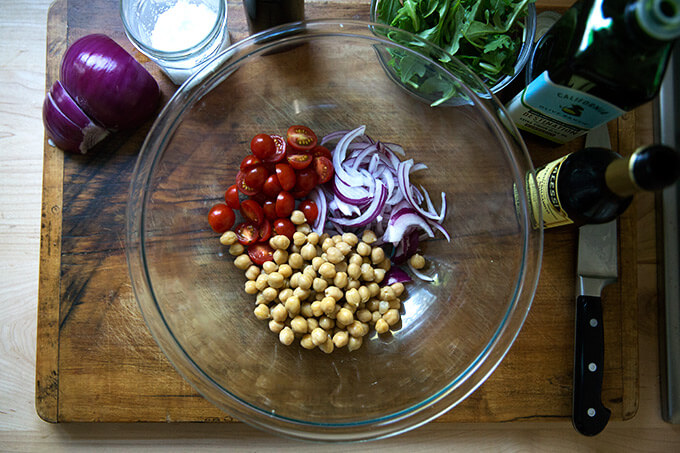 Dress with salt, pepper, olive oil, and vinegar. Gently fold in a handful of arugula. 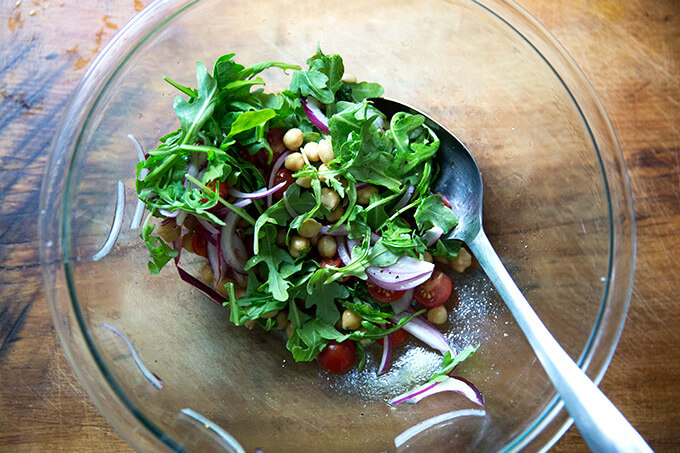 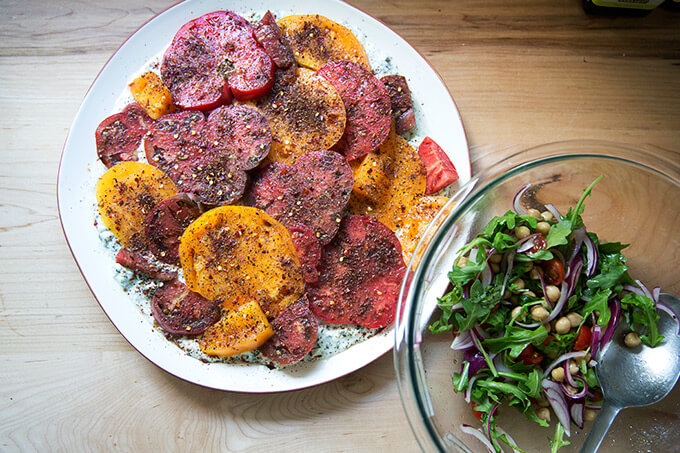 Spread the chickpea salad on top of the tomatoes. 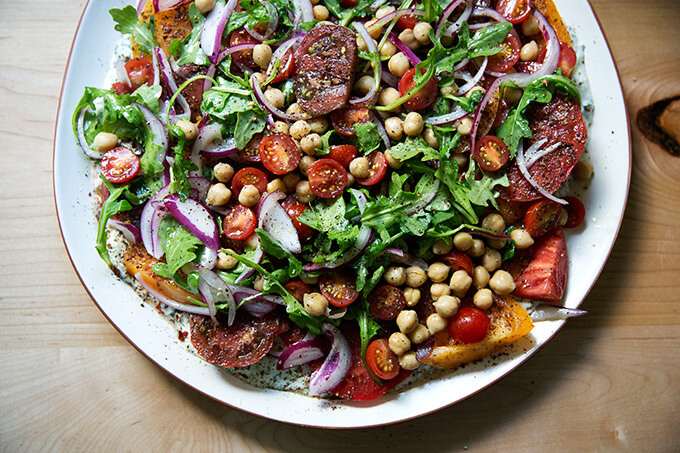 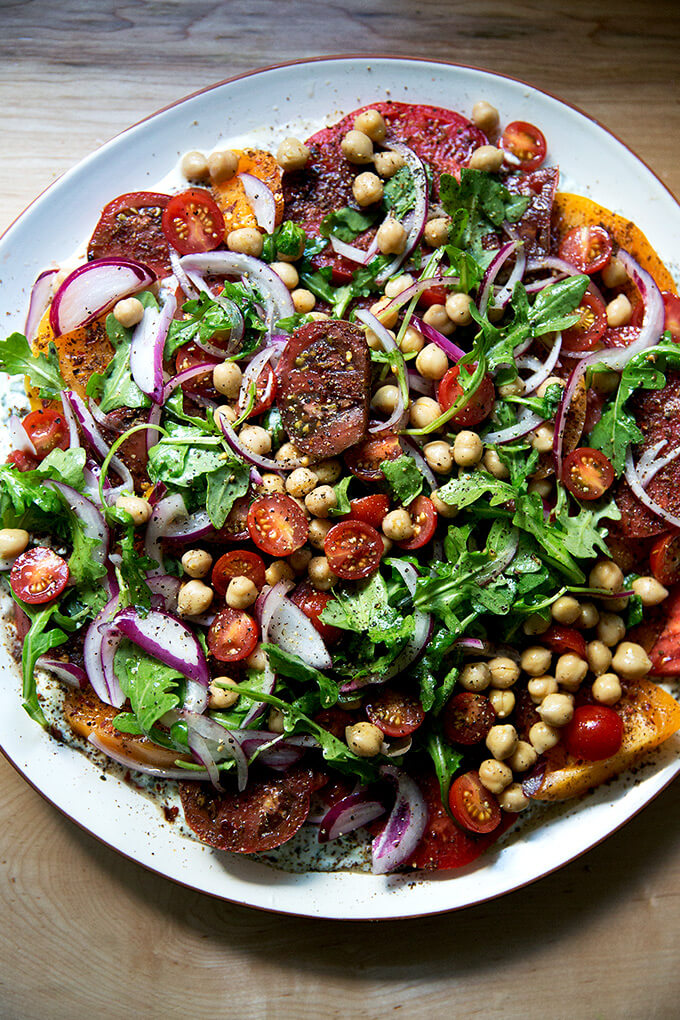 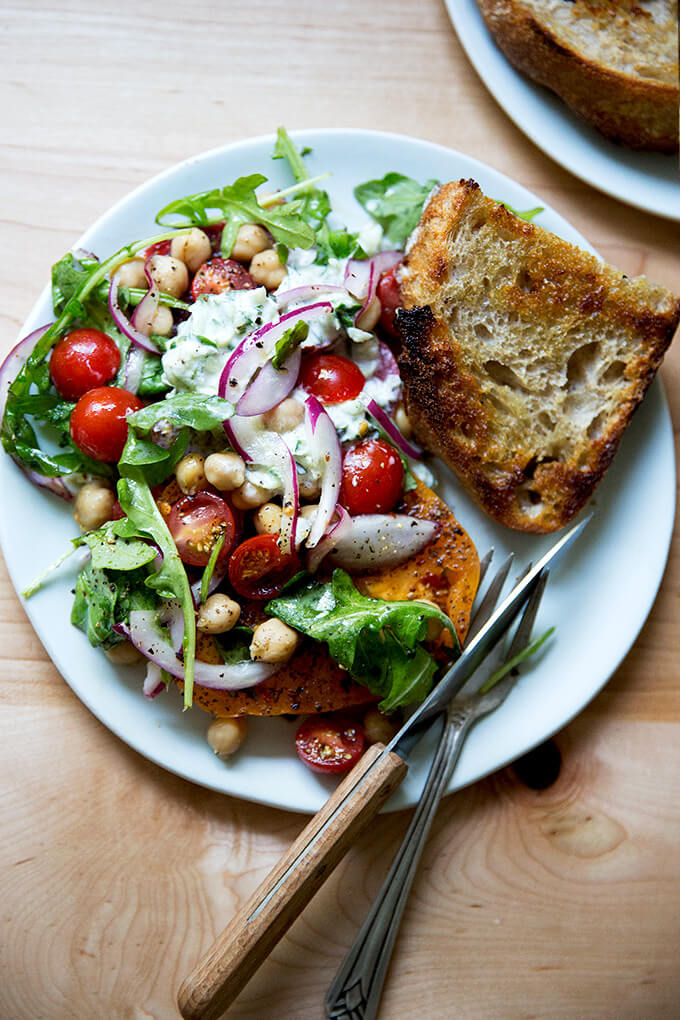 For the yogurt sauce: