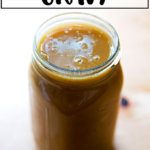 A few weeks ago, when I began thinking about Thanksgiving, I logged in here, to my Alexandra’s Kitchen dashboard, hoping to find a Thanksgiving 2018 “After Action Report”, a draft I thought — hoped! — I had created with notes from last year’s feast.

I’ve included the notes below, and also a recipe for a make-ahead gravy, which I made earlier this week based on this one sentence from my notes:

It was so tasty!

That’s truly all the instruction you need to make a simple gravy, but I’ve included a recipe below. What is especially nice about having a gravy on hand before the bird is even roasted is the mental assurance that as soon as the bird is done, you can (after it rests) serve it without too much of a last-minute scramble.

My after action report did not include this detail, but as I remember, I kept the gravy gently simmering stovetop and added drippings from the turkey roasting pan, fortification from the current year’s bird, and called it done.

* After the recent discovery about no-shrink pie crust, this year I’ll roll out the pie dough on the Tuesday prior to thanksgiving, fit it into the pans, then freeze until Thursday morning.

Gather your ingredients: Homemade chicken (or other) stock is best. If you have turkey stock made from last year’s (or other) bird on hand, use that.

Whisk until it begins to turn light brown, 2 – 4 minutes.

it will seize up…

Add 5 cups of stock, a teaspoon of kosher salt, pepper to taste, a few sprigs sage or thyme, and …

… bring to a simmer:

Reduce heat, and let simmer for 10-15 minutes or until slightly thickened. Taste. It should taste nicely seasoned. Keep it on the thin side: it thickens up as it rests, and furthermore you’ll be simmering it again on Thanksgiving morning, which will reduce it further.

Store in the fridge (or freeze) until Thanksgiving. Warm gently stovetop before serving.